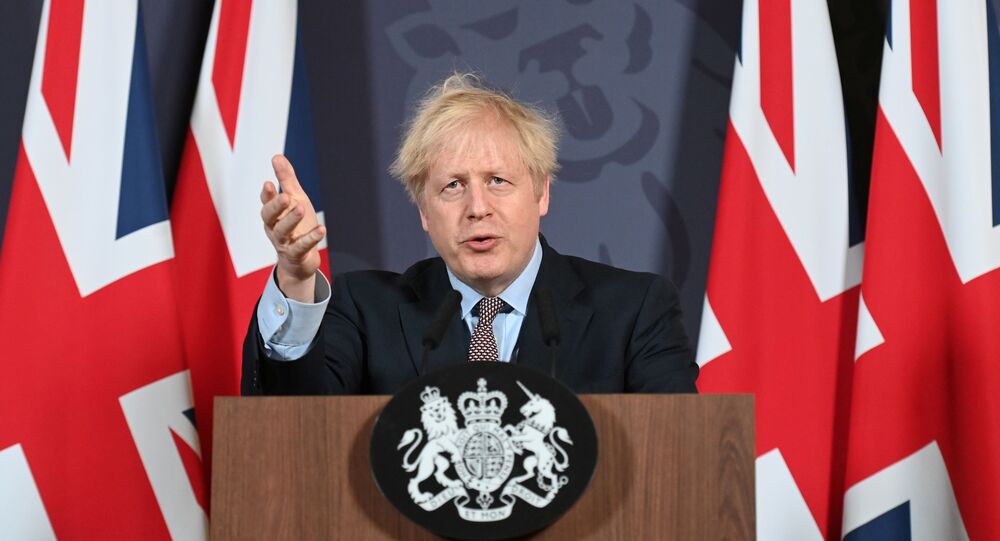 The Christmas Eve Brexit deal was concluded by London and Brussels four years after Britain narrowly voted to leave the bloc and a week before the transition period was about to expire, putting it on course to be fast-tracked through parliament.

Prime Minister Boris Johnson is set to address parliament ahead of a vote on the historic UK-EU Brexit Bill, clinched at the eleventh hour.

Johnson will hail the accord struck on 24 December that preserves Britain's zero-tariff and zero-quota access to the EU market as one that demonstrates "how Britain can be at once European and sovereign", according to excerpts released by his office.

The prime minister will also praise negotiators who were able to show "astonishing speed" in securing the deal amid a raging pandemic.

As MPs gear up to vote on the accord that resets Britain's relationship with its neighbours, Boris Johnson will open the Wednesday debate by underscoring that the underlying purpose of the legislation is to "accomplish something which the British people always knew in their hearts could be done, but which we were told was impossible".

"Those of us who campaigned for Britain to leave the EU never sought a rupture with our closest neighbours... What we sought was not a rupture but a resolution, a resolution of the old and vexed question of Britain's political relations with Europe, which bedevilled our post-War history", Boris Johnson will tell MPs.

As the PM urges a vote on the Brexit deal, an 80-page draft version of which was published by the government on Tuesday, he will say:

"We will now open a new chapter in our national story, striking free trade deals around the world, adding to the agreements with 63 countries we have already achieved, and reasserting global Britain as a liberal, outward-looking force for good".

Ahead of what is expected to be a swift passage through the House of Commons after both Labour and the pro-Brexit European Research Group of Conservative MPs (ERG) indicated on 29 December that they would support it, Johnson will conclude by saying:

"With this bill, we shall be a friendly neighbour, the best friend and ally the EU could have, working hand in glove whenever our values and interests coincide while fulfilling the sovereign wish of the British people to live under their own laws, made by their own elected parliament. That is the historic resolution delivered by this bill".

MPs were given just under 24 hours to study the Brexit Bill, as parliament, in recess for Christmas, was recalled for a day on Wednesday to debate and vote on the legislation to enact Downing Street's trade agreement with the EU.

The bill shaping the future post-Brexit relationship between the UK and the EU is set to sweep through both the Commons and Lords in just a day.

MPs are expected to vote at 2:30 p.m., after which the legislation will go to the House of Lords before it receives royal assent either late on Wednesday or early Thursday.

The European Union (Future Relationship) Bill that will enable the UK government to implement and ratify the agreements agreed between London and Brussels is expected to pass easily, despite criticism over the fast tracking of the process.

Both the UK Labour Party and the pro-Brexit European Research Group (ERG) of Conservative MPs earlier indicated they would be voting for the deal.

"Our overall conclusion is that the agreement preserves the UK's sovereignty as a matter of law and fully respects the norms of international sovereign-to-sovereign treaties", stated the ERG's legal advisory committee on Tuesday. It also added that one of the "sticking points" of the deal - the so-called "level playing field" clauses - go further than in comparable trade agreements, however "their impact on the practical exercise of sovereignty is likely to be limited if addressed by a robust government".

"In any event they do not prevent the UK from changing its laws as it sees fit at a risk of tariff countermeasures, and if those were unacceptable the agreement could be terminated on 12 months' notice", reads the ERG statement.

Labour leader Keir Starmer also urged his party to vote for the 1,246-page trade agreement, despite rebellious MPs expressing concerns that he is "falling into the trap of rallying around this rotten deal".

The group of critics, that includes the former shadow chancellor John McDonnell and Ben Bradshaw, a former cabinet minister, issued a statement that condemned the deal as a "substantial downgrade of the UK's relationship with the EU".

According to the critics, the legislation will potentially "open the door to rampant economic deregulation – a loss of rights and protections for workers, the environment, food standards, and many other areas of life".

Nevertheless, Starmer gave a press conference after the Christmas Eve deal was announced, saying he had made the "tough decision" to support the agreement.

"When this deal comes before parliament, Labour will accept it, and vote for it", he said.

The Scottish National party, the Liberal Democrats, Plaid Cymru, the Democratic Unionist party, the Social Democratic, and Labour Party and Alliance all indicate that they will not support it.

The unprecedented deal on the UK's future trading and security relationship with the European Union, containing provisions on subjects ranging from civil nuclear cooperation and energy interconnections to fishing and aviation, was struck just a week before the end of the Brexit transition period.

​Britain is poised to leave the single market and customs union on 31 December, with new arrangements to allow for tariff-free trade in goods.

"We have taken back control of our money, borders, laws, trade, and our fishing waters. The deal is fantastic news for families and businesses in every part of the UK. We have signed the first free trade agreement based on zero tariffs and zero quotas that has ever been achieved", said Downing Street, hailing the accord.

Von der Leyen acknowledged that the deal was "fair" and "balanced".

"It is the right and responsible thing to do for both sides… At the end of a successful negotiation I normally feel joy. But today I only feel quiet satisfaction and, frankly speaking, relief", said the European commission president.

The UK remains a trusted partner. We will stand shoulder to shoulder to deliver on our common global goals.

But now let's turn the page and look to the future.

To all Europeans I say: it is time to leave Brexit behind.

Our future is made in Europe. pic.twitter.com/QefWjB5KdH

​The deal guarantees "zero-tariff and zero-quota" trade on goods that were estimated to be worth £668 billion in 2019.

Exporters, however, will now face a host of border checks from 1 January, while for most UK nationals freedom of movement in the EU will end.

As talks on the deal came down to the wire, one of the crucial deal-breakers had been the question of fishing.

EU access and quotas in British fishing waters was fraught with tremendous political purport for both sides.
The compromise presupposes a phased transition period of five and a half years to implement changes. The UK is accepting a 25 percent repatriation of quotas.

EU trawlers fishing in the zone six to 12 nautical miles from the British coastline will be able to continue to do so throughout the transition, however, access will be negotiated on an annual basis after that, with a three-month notice for closing access.

Fishing industry leaders, concerned that "marginal" gains in the share of fish the UK fleet will be allowed to catch may be "outweighed" by the curtailing of the "quota swapping" system between British and European vessels, denounced the deal, claiming that the UK's fishing sector will face long-lasting damage.

The National Federation of Fishermen's Organisations (NFFO) stated there was a growing sentiment of "disappointment and frustration" in the industry.

In the face of criticism, Cabinet Office minister Michael Gove said on Monday that the accord negotiated by the UK was the "best possible deal" for the fishing industry overall.

After the EU (Future Relationship) Bill was announced, the European Commission sent the draft treaty to the 27 member states. If the representatives vote to support the deal, ministers on the council of the EU will agree on provisional application of the agreement on 1 January.

The European Parliament decided to refrain from voting on the Bill this year, due to time constraints for scrutiny of the negotiation. MEPs will have their final say next month.