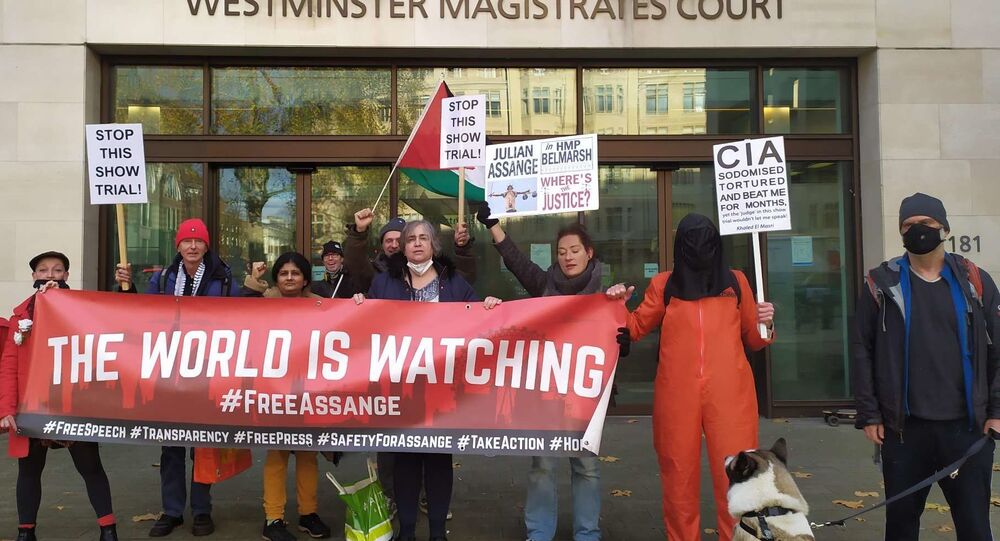 The imprisoned WikiLeaks founder is isolating in his cell in Belmarsh prison due to the high risk of him contracting the novel coronavirus and his susceptibility of developing more severe symptoms.

Julian Assange did not attend his remand hearing on 26 November 2020 because of the severity of the COVID-19 outbreak at Belmarsh prison. "Nothing is happening today", a lawyer connected to the case told Sputnik in the morning at Westminster Magistrates' Court, due to the fact that "55 people [in his block] in Belmarsh" have been diagnosed with the novel coronavirus.

Ed Fitzgerald QC, speaking for the defence, explained to Deputy Chief Magistrate Tan Ikram, at the beginning of the remand hearing on Thursday morning, that Mr Assange "waived" his right to attend in person due to the high risk of him contracting COVID-19 if he leaves his cell. The Judge insisted that a prisoner held on remand needed to be produced every 28 days and asked the court clerk whether there had been a message from the prison authorities at Belmarsh. The court officer replied that an email had been received which stated that Mr Assange "has refused to attend" the video link room.

© CC BY-SA 4.0 / Mohamed Elmaazi
Nearly 200 Doctors Warn Julian Assange is at Increased Risk From COVID-19 if He Remains at Belmarsh
Barrister for the prosecution, Joel Smith, interjected saying that he was acting for the defence in a separate case at Wandsworth and and that "court staff are not producing defendants" who are in blocks that have a viral outbreak. "That's at Wandsworth" Judge Ikram responded, adding that they were speaking about Belmarsh prison and that "the information I have is that [Mr Assange] has refused [to attend]".

Mr Fitzgerald told the court that it was not being argued that Mr Assange "could not attend" but that he understood that the award-winning journalist was "staying in his cell for self-protection". The court has previously heard that Mr Assange is at higher risk of contracting a more severe form of COVID-19 due to a history of respiratory infections.

Belmarsh #Covid outbreak: Day 9 of Julian being confined to cell 24/7, except for 20 min outside on Monday.

As of 2 days ago, 56 people on Julian's house block tested positive for Covid including staff. His house block holds 168 prisoners. Several have been taken to hospital. https://t.co/w1jijuti6r

Ultimately, the parties and the court agreed to another remand hearing, scheduled for 11 December 2020 at 10:30, on the basis that since Mr Assange did not attend today's hearing, the case would have been re-listed "not for 28 days" but rather the "shortest practical period", according to the judge.

Mr Assange is awaiting the decision of Judge Vanessa Baraitser as to whether he will be extradited to the United States. He faces up to 175 years in prison for his role in publishing classified US documents which revealed war crimes and other criminality perpetrated by US-led forces in Iraq, Afghanistan and US-occupied Guantanamo Bay, Cuba.

Final written submissions were filed with the court earlier in November and Judge Baraitser's decision is scheduled to be handed down on 4 January 2021.

*This article was amended at 13:06 on 26 November 2020 to include a tweet from Julian Assange's partner Stella Moris.