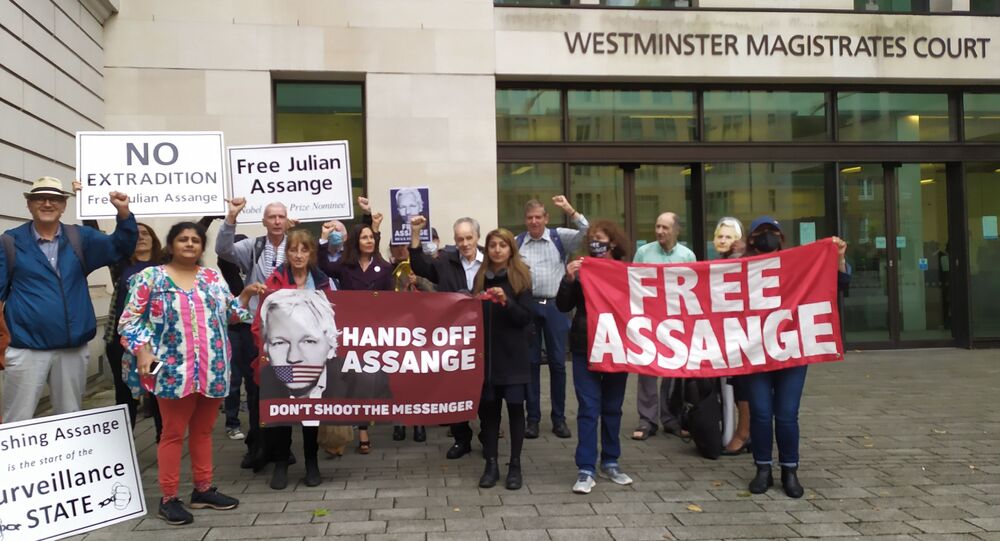 Julian Assange's substantive extradition hearings are due to restart on 7 September at the Old Bailey, where it will be decided whether or not he should be sent the US to face up to 175 years in prison.

Julian Assange’s defence team informed the court on 27 July 2020 that they fear Donald Trump’s administration may be seeking to delay the substantive extradition hearings until after the US elections in November 2020.

Ed Fitzgerald QC attended the hearing in person for the first time since the implementation of COVID-19 restrictions. He told Judge Vanessa Baraitser at Westminster Magistrates’ Court that he is “concerned at a fresh [indictment] being brought [by the US government] at this stage, with the potential consequence to de-rail the proceedings”. Mr Fitzgerald expressed his worry that the US attorney general is “doing this for political purposes” and suspected there is “some manipulation or some political motivation” on the part of the US authorities, something which he said would be wholly "improper".

The judge refused to discuss the matter further because the prosecution has, to date, failed to formally submit the superseding indictment upon the court.

Joel Smith, the barrister who attended the hearing on behalf of the prosecution, told the court that he would “not able to commit to any time table” in terms of the second superseding indictment being formally served on the court and that it would “have to go through the usual channels” before he could say any more.

Kristinn Hrafnsson, WikiLeaks editor-in-chief, followed the hearing remotely from Iceland. He told Sputnik that “the political nature of the entire thing is becoming more and more clear to everybody”. He described as “absolutely unacceptable” the fact that the US administration has failed to serve the second superseding indictment onto the court.

“We were at least expecting this to be served in the court today and the fact that the judge has only heard of it through email exchange form the defence is of course outrageous”, Mr Hrafnsson continued.

The award-winning Icelandic journalist explained that these were his first impressions “from what I could hear [via the dial in process]”, listening to proceedings via audiolink has often been fraught with difficulties over the past few months. Once again numerous journalists found they could not access the proceedings remotely with the details provided to them.

I’m currently stuck on the line with hold music. The last time this happened, the court failed to ever connect the teleconference line to the entire hearing - barring access to media and NGO observers, apart from the handful who were able to attend in person. Unacceptable.

“The ‘new’ superseding indictment actually contains nothing new. All the alleged events have been known to the prosecution for years. It contains no new charges. What’s really happening here is that despite its decade-long-head-start, the prosecution is still unable to build a coherent and credible case.", Mr Hrafnsson also said by way of a statement released after the hearing.

"So, they’ve scrapped their previous two indictments and gone for a third try. They are wasting the court’s time and flagrantly disregarding proper process.” he added.

Mr Assange attended the hearing via video link from Belmarsh prison for the first time in over three months. The incarcerated editor, who remains in pre-trial detention in the country’s primary maximum-security prison, has missed the past four hearings due to ill health and the risk of contracting COVID-19. Prison authorities had originally failed to produce Mr Assange at this latest hearing to the apparent consternation of lead counsel for the defence Ed Fitzgerald QC, who requested that the hearing be adjourned until his client could be brought to the video link room.

The defence team say it has been 17 weeks since they were last able to properly consult with their client. Judge Baraitser has remained steadfast in her position that she can’t intervene with prison authorities to improve Mr Assange’s access to his lawyers nor to address alleged maltreatment.

Judge Baraitser listed the next call-over hearing for 14 August and confirmed that the second part of Julian Assange’s substantive extradition hearings should begin on 7 September at the Old Bailey. Judge Baraitser said she expected the entire process to last three weeks though Mr Fitzgerald reminded her that the defence had previously stated that they would likely require a fourth week given the latest developments in the case.