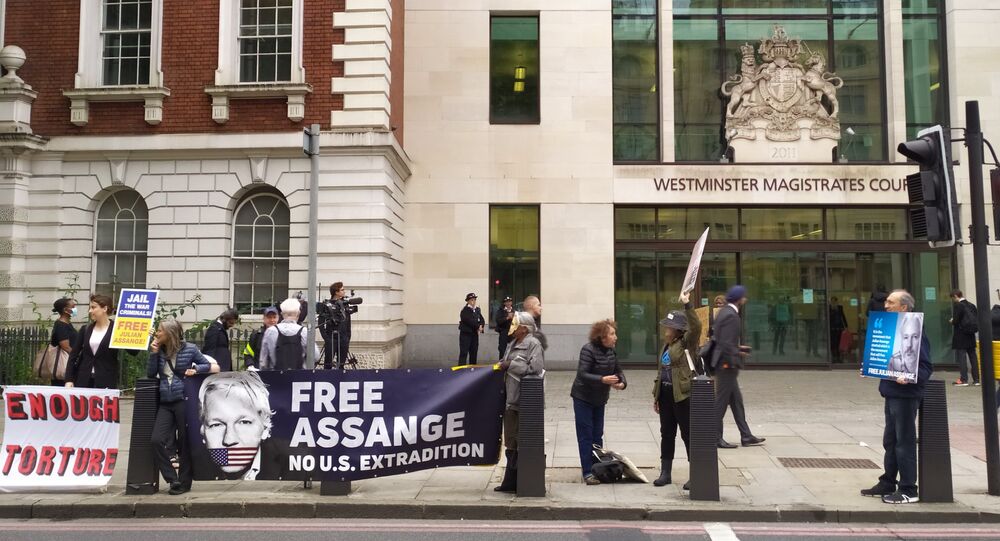 Julian Assange's Defence Was 'Surprised' To Learn of Superseding Indictment In the Press, Court Told

Mr Assange faces 18 charges under the indictment, all of which relate to his role in publishing classified documents revealing, among other things, war crimes committed by US forces in Iraq, Afghanistan and Guantanamo Bay in 2010 – 2011.

Julian Assange's case took an unexpected turn at the latest hearing at Westminster Magistrate's Court on Monday, with the defence telling the judge that it was "surprised" to have learned about the US's superseding indictment against their client via the press.

"A superseding indictment is supposed to do what it says on the tin, it's supposed to replace the existing indictment', said WikiLeaks editor-in-chief Kristinn Hrafnsson "But the US have no new charges to bring, and they can't even be bothered to send the court or the defence team the document. That just shows this is a glorified press release and not a new indictment at all", he added.

US prosecutors amended the "conspiracy to commit computer intrusion" charge levied against the award-wining journalist by alleging that Mr Assange conspired with various hackers including the collective known as Anonymous.

Under this amended charge the time period of the alleged offences has expanded to include events which allegedly occurred from 2009 to 2015. Until now, all US charges against Mr Assange related to documents WikiLeaks published in 2010-2011 revealing, among other things, war crimes committed by US forces in Iraq, Afghanistan and Guantanamo Bay, Cuba.

Mark Summers QC, speaking on behalf of Mr Assange’s team, noted that he was concerned that the need to address the latest US charges against their client may mean the legal team isn't able to meet all the other demands being set by the court.

Mr Assange did not attend the hearing via video link with his lawyers explaining that was due to medical reasons. Judge Vanessa Baraitser told the defence that she received an email from the prison saying that Mr Assange was not unwell but was refusing to come to the video link room. Judge Baraitser said that Mr Assange would require a medical certificate from a doctor in order to not attend the next hearing.

In the past the WikiLeaks founder’s representatives explained that their client was at increased risk of contracting a severe form of COVID-19 due to prior respiratory infections and so needed to avoid the waiting hall and video link room. But the judge dismissed the concerns, which had been supported by witness statements from medical experts, on the basis that Belmarsh prison authorities would look after the health of their prisoners. The high-security prison has already seen at least two deaths from the novel coronavirus which has killed prisoners and staff throughout England and Wales.

© REUTERS / Henry Nicholls
Julian Assange's Fiancee Requests Help From the Australian Government
The substantive extradition hearings are due to restart on 7 September with Judge Baraitser telling the parties that the new venue for part two of the case will likely be at the Central London Criminal Court (aka the Old Bailey). A court officer explained to Sputnik that the court was doing its best to locate a venue for the hearing which would be relatively close to where Assange remains incarcerated at Belmarsh maximum security prison. The court was apparently having difficulty in confirming a new venue for the scheduled date due to the backlog of jury trials which have been delayed due to the COVID-19 pandemic.
...
Reddit
Google+
Blogger
Pinterest
StumbleUpon
Telegram
WhatsApp
614