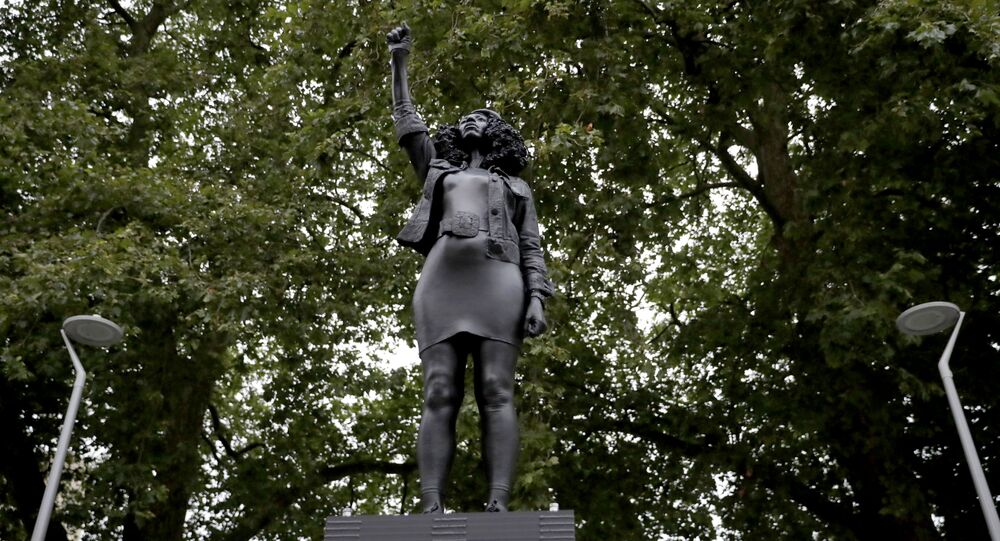 Amid a surge of attacks in the US and parts Europe targeting statues seen as controversial in the wake of the Black Lives Matter protests, triggered by the death of an African American man in Minneapolis police custody last month, a statue of prominent 17th Century slave trader Edward Colston was torn down in Bristol, UK.

The statue of 17th century slave trader Edward Colston in Bristol, toppled earlier amid Black Lives Matter (BLM) protests, has been surreptitiously replaced with a sculpture of one of the participants of the demonstrations, Jen Reid, reported The Guardian.

The sculpture by British artist Marc Quinn, entitled A Surge of Power (Jen Reid), was erected shortly before 5 a.m. on 15 July without informing the Bristol City Council.

The new black resin and steel figure was transported from Quinn’s studio on Tuesday, stored overnight outside the city, and set up in position at dawn using a hydraulic crane truck parked next to the plinth.

The figure echoes the stance adopted by Jen Reid on 7 June, when BLM protesters used ropes to pull the Colston statue, erected in 1895, from its plinth in the city centre. Reid has been photographed standing on the plinth with her fist raised in a gesture of triumph.

​A cardboard placard reading “black lives still matter” was placed at the bottom of the plinth.

“I just knew it was going to happen… They were so efficient,” Jen Reid was quoted by the outlet as saying, admitting that she had been secretly working with Quinn on the design for the monument for weeks.

Bristol Mayor Marvin Rees had earlier announced that a decision on how to use the now vacant plinth would be decided democratically through consultation.

Shortly after the new statue had been installed, Reid stood in front of it with her fist in the air, saying:

“It’s just incredible… That’s pretty fucking ballsy, that it is.”

Quinn, known for his notorious “blood head” self-portrait Self, and a sculpture of an artist that temporarily occupied the fourth plinth in Trafalgar Square, Alison Lapper Pregnant, was quoted as saying:

“I’ve always felt it’s part of my job to bring the world into art and art into the world… Jen created the sculpture when she stood on the plinth and raised her arm in the air. Now we’re crystallising it.

The “ambush” sculpture, writes The Guardian, is expected to feed into the heated debate over public statuary in the UK.

On 7 June protesters had used ropes to topple the figure of the 17th century slave trader Edward Colston, erected in 1895, and throw it into the water at Pero's Bridge.

Subsequently, the statue was retrieved by the Bristol City Council, with authorities announcing it would be displayed in a museum along with placards from the Black Lives Matter protest.

A wave of attacks against statues seen as problematic or controversial has swept the US and Europe in the wake of the Black Lives Matter movement and its protests, triggered by the death of African American George Floyd in Minneapolis police custody last month.

Statues to Belgian King Leopold II, slave trader and philanthropist Edward Colston, Christopher Columbus, as well as America's founding fathers and numerous Confederate commanders from the US Civil War have been attacked with paint, vandalised, and demolished.

In the UK, Prime Minister Boris Johnson responded by saying that to remove statues was “to lie about our history” when counter-protesters assembled in London to ward off a perceived threat to a statue of Winston Churchill, which was covered in protective scaffolding after the bronze statue was spray-painted with the words ‘was a racist’ during demonstrations.

Bank of England, Church of England Apologise for Historic Links to Slavery - Reports