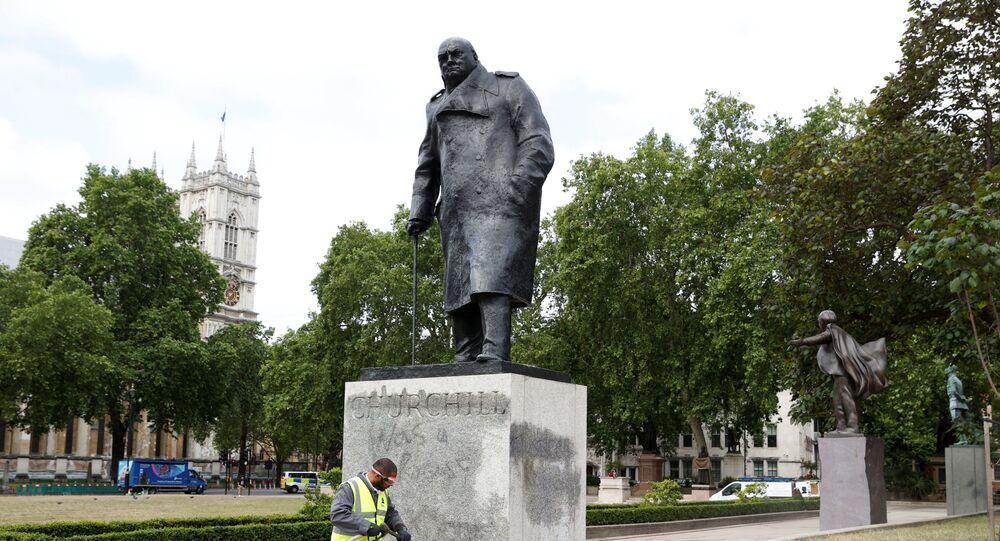 No to Distortion of History: Boris Johnson Vows to Fight All Attempts to Remove Churchill Statue

Amid demonstrations in the UK in solidarity with anti-police brutality and anti-racism protests sweeping America after the death of black man George Floyd in police custody, the statue of Winston Churchill and the Cenotaph in Parliament Square were boxed up to protect them from being vandalised further.

UK Prime Minister Boris Johnson has vowed to resist any attempt to remove the statue of Winston Churchill from Parliament Square after it was vandalised during ongoing protests.

Writing in The Daily Telegraph in response to the row over the removal of public monuments, triggered by the anti-racism demonstrations that have spilled over from the US after the death of black man George Floyd in police detention, Johnson warned against efforts to “photoshop” his country’s complex cultural history, and suggested that trying to do so would be a “distortion” of the past.

“We need to address the present, not attempt to rewrite the past – and that means we cannot and must not get sucked into never-ending debate about which well-known historical figure is sufficiently pure or politically correct to remain in public view,” writes the UK Prime Minister.

Johnson, who authored a biography of Winston Churchill in 2014, adds:

“If we start purging the record and removing the images of all but those whose attitudes conform to our own, we are engaged in a great lie, a distortion of our history – like some public figure furtively trying to make themselves look better.”

Referring to the decision of London Mayor Sadiq Khan to cover up with protective scaffolding such at-risk landmarks as the Cenotaph and statues of Winston Churchill and Nelson Mandela ahead of predicted weekend clashes between Black Lives Matter protesters and those seeking to protect the monuments, Johnson said:

“What has the world come to when one of this country's greatest-ever leaders – perhaps our greatest – has to be shielded from the wrath of the mob?”
© AFP 2021 / JUSTIN TALLIS
A statue of former British Prime Minister Winston Churchill stands near the Victoria Tower of the Houses of Parliament, as a British Union flag flies from a pole atop the tower, in London on December 8, 2016.

While acknowledging that Britain should do more on the issue of racism, the Prime Minister said that a cross-government commission would be set up to look into inequality.

Earlier, Johnson had been quoted by reporters as saying he wanted to “change the narrative” and “stop the sense of victimisation and discrimination”.

“We stamp out racism and we start to have a real sense of expectation of success. That's where I want to get to but it won't be easy,” said Boris Johnson.

Earlier, London's mayor Sadiq Khan was slammed for “surrendering” the capital's streets “to the mob” over a decision on Thursday to board up the monument to Winston Churchill at Parliament Square and the nearby Cenotaph statue ahead of anti-racism protests slated for Saturday.

The move came after the bronze statue to Churchill was spray-painted with the words ‘was a racist’ during demonstrations the previous weekend, while a protester attempted to set a union flag on fire on the Cenotaph.

© AFP 2021 / Tolga Akmen
Authorities in London boarded up memorials including a statue of British wartime leader Winston Churchill on Friday amid fears of clashes between anti-racism protesters and right-wing groups.

Boris Johnson’s remarks followed a day marred by violence amid protests in London, with Black Lives Matter demonstrators and counter-protesters clashing in the capital on Saturday.

As police attempted to keep the two groups apart, they had missiles, smoke grenades, bottles and flares hurled at them.

Six police officers sustained injuries, while over 100 people were arrested in events that Johnson condemned as “racist thuggery”.

​The Metropolitan Police had earlier set a 5 p.m. curfew and warned people joining demonstrations on Saturday they risked being arrested for violating it.

The violence was also condemned by the Mayor of London Sadiq Khan and Home Secretary Priti Patel, with the latter calling it “thoroughly unacceptable thuggery”.