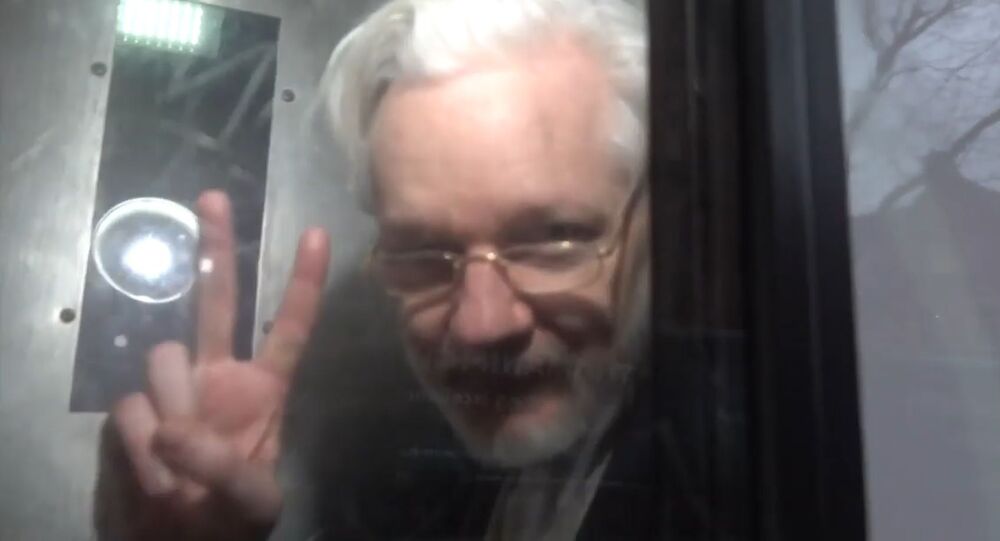 The WikiLeaks publisher is wanted in the United States for his role in publishing classified US documents which revealed war crimes perpetrated by US-led forces in Iraq, Afghanistan and Guantanamo Bay, Cuba.

Julian Assange’s supporters from around the world are posting messages of well-wishes to the WikiLeaks publisher, for his birthday on 3 July, as he remains incarcerated in Belmarsh maximum-security prison.

“We are calling on people to protest by posting selfies with a happy birthday message despite the fact that Julian Assange is spending a second birthday behind bars. He is guilty of no crime”, John Rees, of WikiLeaks’ official Don’t Extradite Assange Campaign, explained.

Happy birthday wishes to Julian Assange. Bittersweet wishes because this is what he is facing. Imprisoned for having the courage to publish material exposing the war crimes of the world's most powerful empire. #HBDJA#JA49#HappyBirthdayAssange #FreeAssange pic.twitter.com/wbH0VqwcJG

Julian Assange is 49 today. He ‘celebrates’ in Belmarsh prison. Isolated for 23 hours a day. Why? Because he revealed American war crimes. The US wants him extradited. This must not happen. We demand his release#freejulianassange #dontextraditeassange #happybirthdayjulian pic.twitter.com/9ll34sYqcw

​Rees, himself a long-time journalist, called the extradition proceedings against Assange “an assault on the freedom of the press” which “should be dropped”.

A solidarity birthday vigil has been organised outside Belmarsh prison today which started from midday and is expected to continue to around 7pm.

The hashtags currently being used by social media users are #HBDJA, #JA49, #HappyBirthdayAssange and #FreeAssange.

Make a selfie video of you wishing Julian #Assange a Happy Birthday, include a fact about #AssangeCase.

And flood your social media with it using the #FreeAssangeBirthday along with whatever other relevant hashtags #Candle4Assange#HappyBirthdayAssangehttps://t.co/5gPHikDqyd

Mr Assange's Mother: Thank you to all his supporters​

“Id like to thank all the supporters around the world working hard to save Julian, celebrating his important courageous journalism and protesting his brutal political persecution today” said Christine Assange, the award-wining journalist’s Australia-based mother, in a statement to Sputnik.

Here is a previously unpublished photo of 2 year old Julian, looking in the windows of an abandoned old house, hoping to discover something of great interest on the inside...hidden from view..#Wikileaks#SaveJulian #HappyBirthdayJulian pic.twitter.com/j9UfQevJle

​Ms Assange, who no longer gives interviews, also thanked small independent media and journalists “who have continually investigated and exposed the facts of the 10 years of abuse of legal process” against her son. Mr Assange’s mother also passed on a special thanks to UN Special Rapporteur on Torture Nils Melzer, along with his medical team. Mr Melzer, and two other experts in examining victims of torture, concluded last year that the WikiLeaks publisher showed clear symptoms of "psychological torture".

Chris Williamson, a former shadow cabinet member with Labour, blasted the continued incarceration of Mr Assange as bringing “shame” onto the UK.

"[Mr Assange] has performed a vitally important international public service in exposing the abuse of corporate and state power, including war crimes” he said. The former MP for Derby North, who has since founded the political show Resistance TV, also lamented the fact that the response from most British parliamentarians has been “virtually non-existent”. “Their silence makes them complicit in, what can best be described as, the torture of Julian Assange and their failure to speak out brings our democracy into disrepute”, Mr Williamson added.

Doctors For Assange, who also received a special thanks from the incarcerated publisher’s mother, recently published a letter condemning his treatment which they described “medical neglect” and “torture”.

Today as you turn 49 and spend your 10th bday held in captivity, because you had the courage to publish US war crimes, I salute you.

While your tormentors continue to reveal their inhumanity, your power and grace only grows. #HBDJA#JA49 #FreeAssange pic.twitter.com/v2WWUiP0ab

The messages of hope and support were also echoed by some in the legal profession. Polona Florijancic, of the group Lawyers for Assange, described the prosecution and incarceration of Mr Assange as a form of “increasingly grotesque lawfare” characterised by a “systematic and continuous disregard for his fundamental human rights”.

She said Mr Assange has displayed immense “strength of character” by “defying the odds and celebrating his 49th birthday”.

"We must not however lose sight of the very real danger posed to his life in the current situation and we must continue demanding his immediate release", Ms Florijancic added.

Despite all efforts to crush him physically and mentally, Julian Assange defies the odds and celebrates his 49th birthday today. Julian, we admire your resilience and your strength. #HappyBirthdayAssange #FreeAssange pic.twitter.com/VJXYWkljPN

“On Julian Assange’s 49th Birthday the second spent inside Maximum Security Belmarsh Prison, we celebrate his moral stamina and our commitment to him as a defender of Free Speech and a Free Press that has helped him, so far, survive state persecution by the USA and its allies”, said Emmy Butlin, spokesperson for the Committee to Defend Julian Assange.

“We salute Julian Assange as we commit to defend him as one of our own as he selflessly endures his ordeal”, Ms Butlin added.

The WikiLeaks publisher faces up to 175 years in prison in the the United States where he is wanted to stand trial for his role in publishing classified documents which revealed, among other things, war crimes in Iraq, Afghanistan and US occupied Cuba, Guantanamo Bay. Though the US has since declared that it has amended the indictment against Mr Assange to include alleged offences of collaborating with hackers, neither the defence nor the court has formally received this latest indictment, which has been criticised for its reliance on a convicted child abuser. The second part of Mr Assange’s substantive extradition hearings is due to begin on 7 September.

Julian Assange's Defence Was 'Surprised' To Learn of Superseding Indictment In the Press, Court Told