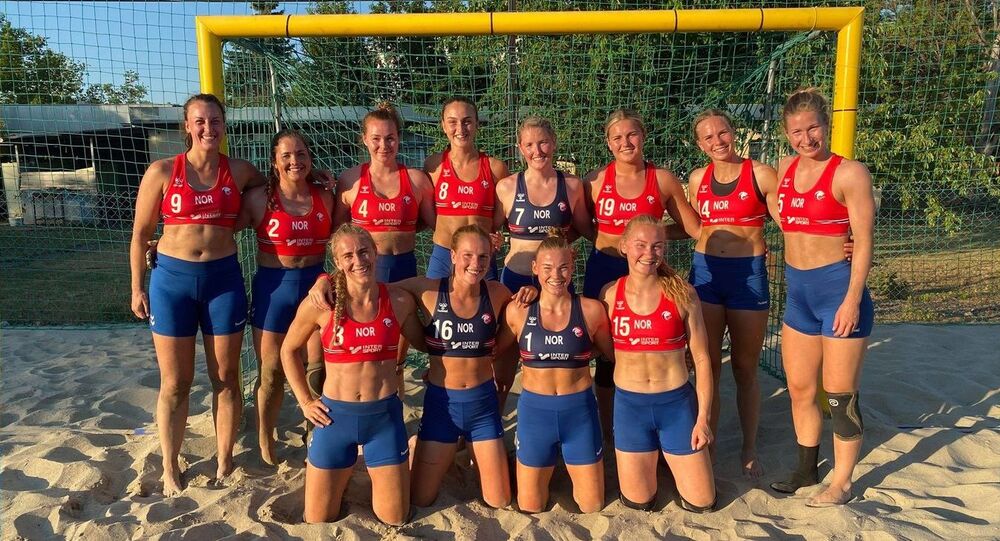 The issue of women's skimpy clothes is hotly contested in sports and beach handball is not the only sport, where women are required to wear bikinis. Beach volleyball is quite popular for the revealing outfits of competing women's teams too.

After the Norwegian women's beach handball team was fined $1,700 due to their refusal to wear bikini bottoms, opting to wear shorts instead, Twitterati slammed the European Handball Federation (EHF) for being "misogynistic" and "sexist". Each Norwegian player received a fine of $177.

On the other hand, some social media users called the rules archaic, while others declared the situation "awkward".

This is a bit much.

It's like expecting men to wear tighty-whities while they compete. Seems super awkward. https://t.co/wAL1djA8Np

This ain't it. How about as long as it doesn't provide a competitive advantage we let women wear what they are comfortable wearing? https://t.co/2tdZZlPtky

Well done Norway's women Beach Handball team in challenging the archaic dress code. Surely in 2021 we can wear what we want?

Norway women's beach handball team fined for wearing not bikini bottoms.
"Men are allowed to wear shorts that are “not too baggy,” as long as they remain 10 centimetres above the kneecap.”
Just stop. Stop. https://t.co/svgtI9PD0I

This sexist ruling needs to change. There is no athletic reason why women “must” wear bikini bottoms. 👏 Bravo Norway's women's beach handball team who appealed for change and are now fined. To illustrate just look at the men and women’s team wear. Rule needs to change. https://t.co/LCdJaRIwih pic.twitter.com/RBRWIw29rN

​The punitive measures from the EHF came after Norway's team decided to wear thigh-length elastic shorts in their bronze medal match against Spain during the Euro 2021 tournament in Bulgaria to protest the sport's stringent regulations.

The rules mandate women participants wear bikinis during their matches, unlike men, who are allowed to wear shorts in competitions.

In a statement released to the media on Tuesday, the EHF said that it was dealing with "a case of improper clothing" as the uniforms of the women were "not according to the Athlete Uniform Regulations defined in the IHF Beach Handball Rules of the game".

© CC BY-SA 3.0 / Marcus Cyron / Beach handball Euro 2019 Quarter Final Women DEN-NOR
Panties in a Twist: Norwegian Beach Handball Squad Furious After Being Pressured to Wear Bikini
After the EHF was criticised for its move to impose fines on Norway's team, Thomas Schoeneich, a spokesman for the organisation, said it was only implementing the rules laid out in the International Handbook Federation (IHF).

"Change can only happen on an International Handball Federation level", Schoeneich said in a statement on Tuesday.

According to the IHF's rules, women are required to wear bikinis "with a close fit and cut on an upward angle toward the top of the leg".

The Norwegian side didn't commit the act unknowingly, rather the team's players wanted to highlight the double standards for female athletes in sports.

Their decision to flout the rules in their bronze medal match was also backed by Kare Geir Lio, the president of the Norwegian Handball Federation (NHF), who said the organisation had been raising its voice against the discriminatory rule since 2006.

He further stated that he was proud of the Norwegian team and the organisation will pay the fine on behalf of its players.

"We at the NHF stand behind you and support you. Together we will continue to fight to change the rules for clothing so that players can play in the clothes they are comfortable with", the federation wrote on Twitter.

When reporters asked if the international federation has done anything to curb the discriminatory practice, Lio responded: "Nothing has happened".

"Women should have the right to have a uniform they think is suitable for performing in their sport", Lio added.

Norwegian player Martine Welfler also slammed the authorities for levying fines on her and her teammates.

"I don't see why we can't play in shorts. With so much body shaming and stuff like that these days, you should be able to wear a little bit more when you play", she told the international media on Tuesday.

Welfler claimed that there were players in her country who weren't interested in participating in international tournaments because of these outdated uniform rules.

As per Welfler, female players were sick and tired of being scrutinised for their skimpy outfits. She argued that revealing clothes were not good for the sport as the attention of the fans has always been more on their bodies, rather than their game.

Unlike international events, players are allowed to wear shorts in Norway's domestic tournaments.

Panties in a Twist: Norwegian Beach Handball Squad Furious After Being Pressured to Wear Bikini