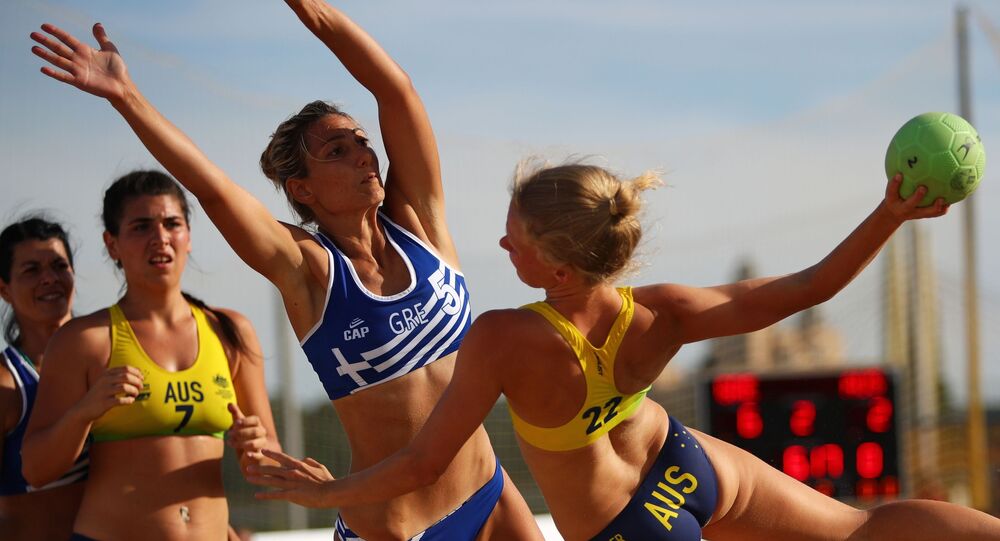 Women’s beach handball teams currently playing at the Youth Olympics in Argentina are at the center of a sweeping debate over two-pieces they are wearing for matches and if these are in compliance with the International Handball Federation’s (IHF) standards.

The sport-style bikinis have been instantly picked up on Twitter, with fans suggesting the players, who are girls hardly older than 18, have already been subjected to sexual exploitation. The outfits are “wide, but still bikinies [sic],” a user claimed, going on to elaborate on his message:

“I just want to make it clear men are watching their bottoms.”

“I’m watching the beach handball at the Youth Olympic games. I wonder why women have to play in bikinis while men play with shorts and tank tops??” another fan wrote, apparently referring to the difference in men’s and women’s attire as stipulated by the IHF rules.

The regulations oblige men to put on shorts of a decent “10 cm above the kneecap” length and a tank top, whereas women athletes are supposed to wear “bikini bottoms with a close fit and cut on an upward angle toward the top of the leg.”

A better part of fans thus drew a line between the “almost naked” girls and the less revealingly dressed male players, hinting that the approach is not equal and hence pondering on sexuality issues.

“The only thing that annoys in beach handball is that women are made to wear bikinis […] they are sexualized, and it’s not important if they play well or not,” one Twitterian wrote in Spanish.

“Sex sells i guess. But respect the dignity of our youth & women. Too many sports do this,” another one replied in comments.

Sex sells i guess. But respect the dignity of our youth & women. Too many sports do this. Unless mens teams are willing to try wearing the same outfit perhaps modifications are required.

There were those, however, who obviously found a positive side to the matter, claiming sexy looks have a magnetic appeal to the stronger sex and are basically a – or even the – reason why they watch handball. One netizen even clutched his head, asking how on Earth he “could have missed” the spectacular sport before.

“I love beautiful female bodies,” another one chimed in. “Definitely too revealing!” a different commentator remarked humorously alongside a winking smiley.

Another man opted to come up with clear-cut reasons for the rules:

Hey,they doing it on the beach. That's practically functional.

A user nicknamed Zivo even referred to Ancient Greeks, reminding the rest that the historic athletes competed in their birthday suits:

Ancient greeks competed nude. I say it's in line with tradition.

Queens of the Sand on Display at Beach Handball World Championships