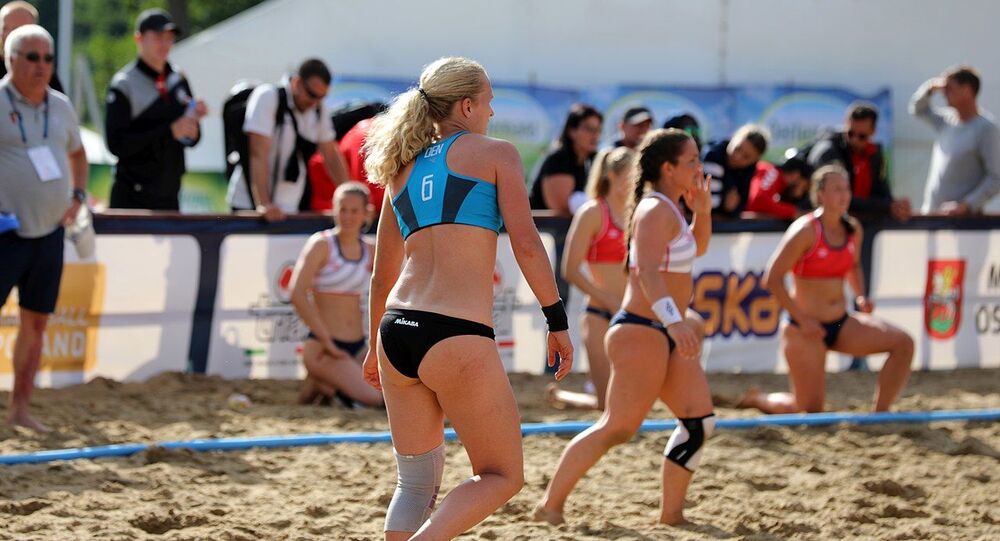 Panties in a Twist: Norwegian Beach Handball Squad Furious After Being Pressured to Wear Bikini

In what a Norwegian commentator dubbed the "panties crisis", the Norwegian team's little rebellion against the sports attire seen as uncomfortable and degrading was quashed.

At the ongoing European Championships in beach handball, the game attire has landed in the spotlight. Particularly, the very specific rules for how ladies should be dressed in their nether regions, where several centimetres of cloth matter.

Norway has long fought against the dress code in women's beach handball. Ahead of the European Championships in Bulgaria, a protest was launched, but the European Handball Federation EHF subsequently reacted and had its way.

"Women should wear a bikini where the top should be a tight-fitting sports bra with deep openings at the arms. The bottom must not be more than ten centimetres on the sides", the international regulations say.

The Norwegian Beach Handball Association has long been pushing for the international regulation demanding tight-fitting sports bras and bikini bottoms to be abolished. Before the European Championships in Bulgaria, they planned to protest against the regulations and play in thigh-length tights.

The Norwegian ladies were even prepared to pay the fines that the violation would entail. But as the premiere match against Hungary approached, things got more complicated.

"First we were told about a fine of 50 euros per person per match, something that would have landed us a fine of about 4,850 euros. We accepted that", player Katinka Haltvik told the national broadcaster NRK. "However, just before the match we were told that we will be disqualified if we play like that. So we had to go with the bikini bottoms".

"It's so embarrassing and hopeless, a total 'good night'. We would have gladly paid the fine if it was all about that. The whole team has our full support no matter what they have to do", Norwegian Handball Association Chairman Kåre Geir Lio said.

In the next segment of what Norwegian commentator Leif Welhaven dubbed the "panties crisis", Norway intends to submit a letter of protest, having received the support of Sweden, Denmark, and France.

"It's unfair. Money and fines should not be part of the discussion. To create change, nations must stand together, and we are doing it now. If nothing changes before the next championship, I will put pressure for us to play exactly as we want, and take the consequences that follow", Nicolas told the newspaper Verdens Gang.

Nicolas stressed that the change is absolutely necessary.

"We have lost players due to the suits. The players tell me they are uncomfortable, feel naked, and watched. It is a sport with a lot of movement and you are hindered by the bikini. There is also discomfort associated with menstruation, and not least religion", Nicolas explained.

The European Handball Federation EHF explained that they have merely clarified the list of penalties for the Norwegian Federation, but that disqualification was never an option.