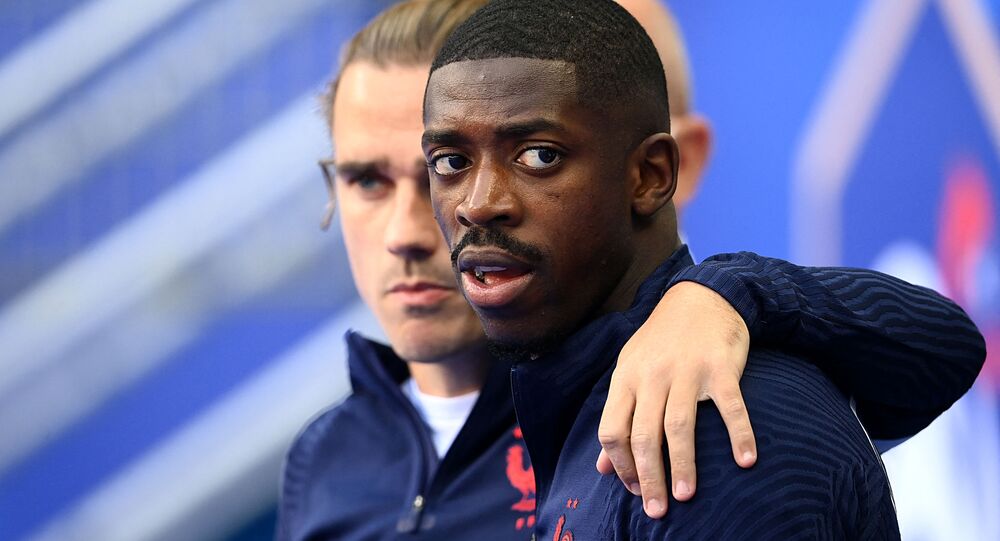 Barcelona and French footballers Ousmane Dembele and Antoine Griezmann are not the first footballers to be accused of racism. Atletico Madrid striker Luis Suarez, former Manchester United goalkeeper Peter Schmeichel, and ex-Chelsea skipper John Terry have all been charged with racism in the past.

The footage, however, doesn't seem to be from France's disastrous Euro 2020 campaign, where they lost in the Round of 16 to underdogs Switzerland in what was one of the biggest upsets of the tournament.

Multiple media reports claim the clip could have been shot in 2019, when Barcelona toured Japan for their pre-season training.

​Griezmann moved to Barcelona the same year after the Catalan giants signed him from La Liga rivals Atletico Madrid in a $135 million deal.

The video sparked massive outrage on Twitter, with the hashtag #StopAsianHate trending on the social networking site for many hours on Monday.

To say I'm disappointed at the Griezmann/Dembele situation is an understatement. I understand this was a few years in Barca's 2019 Japan tour but it shouldn't matter. Unacceptable. #StopAsianHate https://t.co/D2szUTvGPs pic.twitter.com/stJSTzfyQA

People shout BLM, but no one cares about Asian racism

Many social media users have called on the French Football Federation to take stringent action against the pair.

The Video in Question

In the video, Dembele and Griezmann are seen criticising the Asian accents of the technicians who came to repair a television in their hotel room.

The footage shows three men entering Dembele and Griezmann's room before attempting to fix a glitch in their TV set. While Griezmann watches them closely, Dembele is seen recording the technicians via "Snapchat", a vastly popular social media app.

In the short video clip, Dembele tells Griezmann: "All these ugly faces, just so you can play PES, aren't you ashamed?"

He later adds: "What kind of backward language is that?" and "Are you technologically advanced in your country or not?"

Unlike Dembele, whose words are audible, Griezmann's words can't be heard, but he can be seen laughing throughout the video. But this is not the first time the 30-year-old has been involved in a racism controversy. In 2017, he created a furore online after posting his own picture dressed in blackface ahead of a fancy dress party at home.

How Has Dembele Responded?

The 24-year-old striker reacted to the accusations by refusing to accept that his actions were discriminatory to a particular community.

"It all took place in Japan. It could've taken place anywhere on the planet and I would've used the same expression", Dembele wrote on Instagram on Monday.

"I was therefore not targeting any community. I just happened to use this type of expression with my friends regardless of their origins".

"This video has since been made public. I appreciate therefore that it could've hurt the people present in these images. Because of this, I would like to sincerely apologise to them".

What Did Griezmann Have to Say?

He wrote on Twitter: "I have always been committed against any form of discrimination. For the past few days, some people have wanted to pass me off as a man I am not. I firmly refute the accusations made against me and I am sorry if I offended my Japanese friends".

However, another video later emerged in which Griezmann is seen making disparaging remarks about Japanese people thus fuelling the controversy around the footballer.

The footage in question shows Griezmann sitting in a hot tub before mocking the local language with words like "ching chong".

The second video clip surfaced online hours after Griezmann apologised for offending his Asian friends in a previous video.

Former Indian footballer Abdul Khalique, though, was extremely critical of both Griezmann and Dembele's actions in the video.

"Griezmann and Dembele's actions warrant some punishment from the French Football Federation, but I doubt any action will be taken against the pair", Khalique told Sputnik on Tuesday.

"Imagine what kind of impact such acts would have on young minds, who treat these footballers as their role models. It's high time FIFA and UEFA took a hard decision on racism in football", he added.