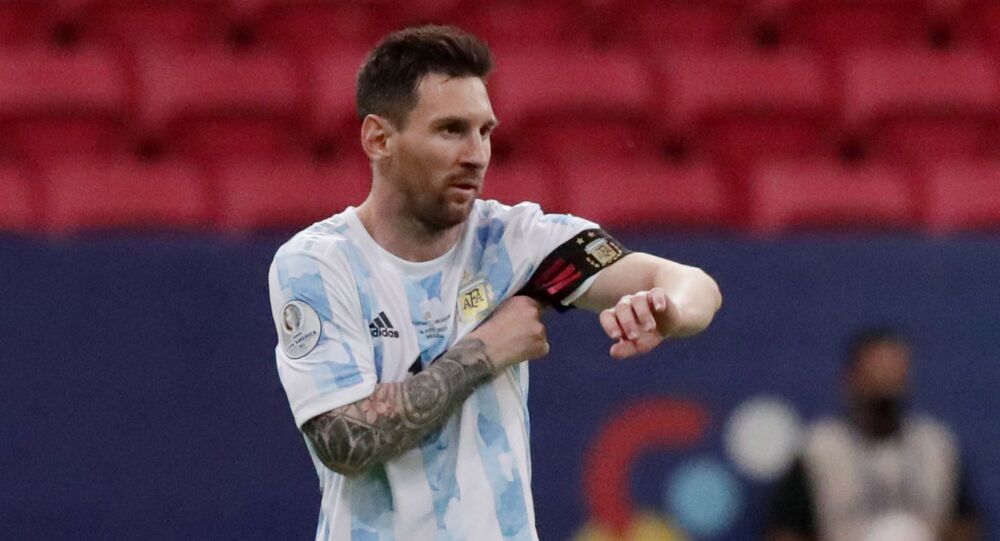 Lionel Messi is currently leading Argentina in the Copa America 2021, where he is bidding to win his maiden international tournament with his national side. The Argentines will face Colombia for a place in the final of the iconic South American football competition on Wednesday.

Argentina captain and Barcelona superstar Lionel Messi's skills are said to be insane on the football pitch. Most of his fans, teammates, and officials tend to lose their minds when Messi is in full flight and delivering the goods against opponents.

Just like many others, Argentina's equipment manager Mario Di Stefano lost his mind after watching Messi's brilliant free kick in Argentina's 3-0 win over rivals Ecuador in the quarterfinals of the Copa America on Sunday.

​On the other hand, his goal against Ecuador put him two ahead of his great rival Cristiano Ronaldo, who has registered 56 free kick strikes so far in his illustrious career.

And, equipment manager Di Stefano was so happy with Messi's performance that instead of hugging him, he head-butted the 34-year-old in delight.

According to several media reports, Messi appeared to be in some sort of discomfort as he was seen touching his right cheekbone after the head-butting incident.

Despite his equipment manager's unusual gesture of "love", Messi is expected to be fit and play a major role in Argentina's semifinal against Colombia in Brasilia.

The match is scheduled to take place at the National Mane Garrincha Stadium on Wednesday.

With four goals in total, Messi has been the main force behind Argentina's Copa America campaign.

Once again, he was the star of their quarterfinal victory as he delivered not only a brilliant free kick, but also assisted Rodrigo de Paul and Lautaro Martinez in their respective goals, securing a comfortable 3-0 win over the Ecuadorians on Sunday.

Former Indian footballer Abdul Khalique praised Messi for his performance before saying that it is his best possible chance to win the tournament.

"Unlike in the past, Messi looks really determined to win his maiden international trophy at the ongoing Copa America tournament", he told Sputnik on Monday.

"Surprisingly, Argentina is also playing as a team, which had been their biggest problem since the arrival of Messi. It has allowed Messi to play freely, which has helped him to score goals as well as assist his colleagues in scoring goals", he added.