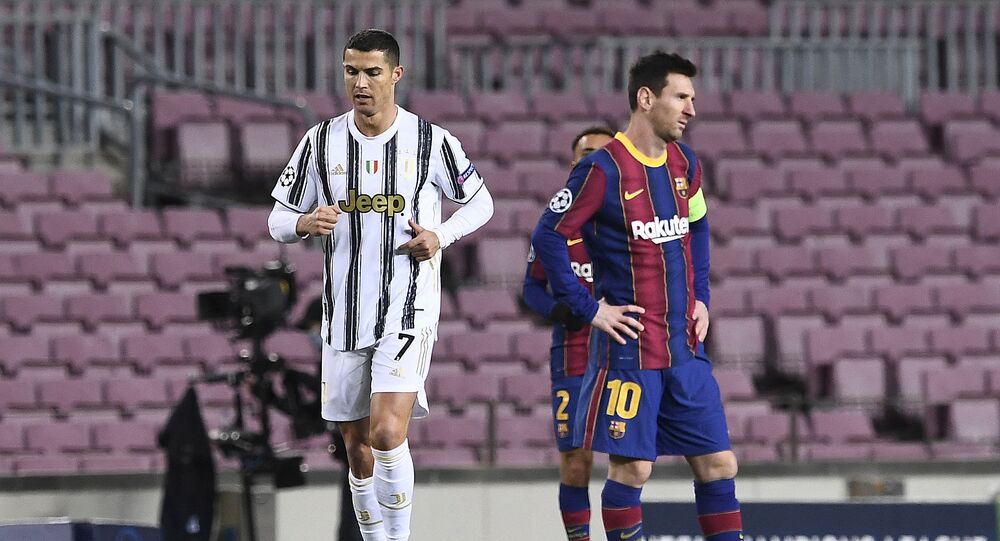 It is the first time that any sports star, let alone a footballer, has topped the annual rankings, which are majorly dominated by American film, music and reality TV stars.

Juventus mega star Cristiano Ronaldo has dethroned wrestler-turned-actor Dwayne "the Rock" Johnson and American singer Ariana Grande as the top-grossing influencer in the annual Instagram Rich List of celebs who charge the most for endorsing a product on the social network.

According to this year's Instagram Rich List, compiled by HopperHQ.com since 2017, Ronaldo's social media valuation has skyrocketed since his involvement in the Coca-Cola controversy at the Euro 2020.

HopperHQ is a social media management firm, which tracks social media activity and is based out of the United Kingdom.

© CC0
Ex-Barcelona Star Reveals Who Will Be Football's Next God After Cristiano Ronaldo and Lionel Messi
Ronaldo’s fees for sponsored posts on Instagram have almost doubled in just two years --- from $889,000 in 2019 to $1.6 million in 2021.

Nicknamed CR7, Ronaldo occupied third place in 2019. But he surged ahead of top-ranked Johnson and Kylie Jenner, the US socialite and makeup entrepreneur who was in second place in the 2019 list.

The former Manchester United forward, who takes home an eye-watering $34 million annually as salary from Serie A club Juventus, makes more than $40 million per year from Instagram, which is $6 million more than what he earns playing for Turin.

His combined number of social media followers stands at more than 540 million. Additionally, Ronaldo is the most-followed individual on Instagram and the only person to have over 300 million followers.

The 36-year-old has added more than 125 million followers on his Instagram account since the start of 2020 and the number of followers on his page has tripled since 2017, when the inaugural "Rich List" was released by HopperHQ.com.

© REUTERS / MASSIMO PINCA
Coca Cola Loses Billions in Market Value as Cristiano Ronaldo Snubs Soft Drink at Euros Presser
Ronaldo's pay-per-post fee has increased to unprecedented heights because of the massive rise in his popularity, particularly during the COVID-19 pandemic.

His recent actions, including the act of removing Coca-Cola bottles from his table and replacing them with water during a press conference at the ongoing Euros, drew almost everyone's attention.

The incident occurred when the five-time Ballon d'Or winner, known for his health obsession in the football world, was less than pleased to see bottles of the ubiquitous carbonated beverage on his table.

Within a span of 24 hours, Ronaldo became a global health icon and a rallying point for health experts across the world because of his snub to Coca-Cola, one of the major sponsors of the prestigious European tournament.

"With the Euros starting earlier this month and a few controversial marketing moves over the last couple of weeks, Ronaldo's presence has skyrocketed," Mike Bandar, HopperHQ.com's co-founder said in a statement on the company's website.

"Just a week ago he confirmed his 'king of Instagram' status as he became the most-followed person on the platform," Bandar added.

Apart from Ronaldo, only one other sports star appears in the top-10 list, and it's none other than Ronaldo's great rival, Lionel Messi, who is at the No.7 spot on the list. The Argentine charges $1.2 million for a post on Instagram.

Former Indian footballer Abdul Khalique believes the immense popularity Ronaldo enjoys on social media is largely due to his success on the field.

"Ronaldo's status as a social media behemoth is largely based on his success, lifestyle and attitude," Khalique told Sputnik on Thursday.

"He is not just a role model for millions of youngsters who want to make their career in football, but for everyone who believes in healthy living and all of those who dream of achieving their goals despite facing adversity in their lives."

"His tenacity, his relentlessness, his athletic body and his leadership are some of the traits that are not just loved by youngsters but are admired by even his critics. That's the reason he's on top in football as well as on the social media popularity charts," he added.

Meanwhile, the other high-profile names on the list are US media personality Kim Kardashian, pop star Beyonce Knowles and singer, actress, and producer Selena Gomez.