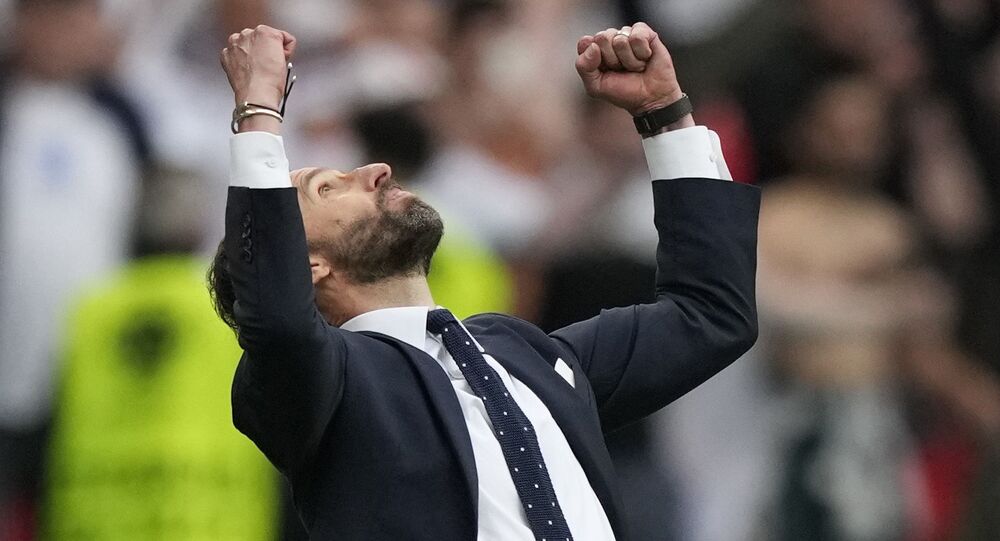 Tournament favourites England will take on underdogs Denmark in the Euro 2020 semifinal at London's Wembley Stadium on Wednesday. The Three Lions, who won their last major trophy at the 1966 FIFA World Cup, are bidding to end their 55-year drought.

England boss Gareth Southgate has warned Harry Kane and his men against taking their Euro 2020 semifinal opponents Denmark lightly as they are "riding a wave of emotion" that has transformed them into a "powerful force" ahead of their clash with the home side.

According to Southgate, the Danes have made it through to the semifinals of the prestigious European tournament on the back of the Christian Eriksen incident.

Danish midfielder Eriksen suffered a cardiac arrest in their opening match against Finland and was rushed to a hospital after receiving lifesaving CPR from his teammates on the pitch.

It was a dreadful night for Denmark's coach Kasper Hjulmand and captain Simon Kjaer as they saw their star player collapse in front of their eyes minutes before half-time. The team's subsequent 1-0 loss to the Finns further deepened their wounds.

Yet, as per Hjulmand, Eriksen's cardiac arrest has created an unbreakable bond within the team and that's the reason Denmark has reached the last 4 of the European Championship.

Before the start of the Euros, Denmark was dubbed as one of the dark horses by the pundits and they have lived up to their billing, dismantling Wales 4-0 in the Round of 16 followed by a clinical 2-1 triumph over the Czech Republic in the quarterfinals.

Southgate reckons that Eriksen's cardiac arrest has certainly made a positive impact on the Danish team because they now want to win the Euro 2020 title for him.

"We talk about perspective in sport but we rarely have it. This was a moment that brought it home for all of us", Southgate told the British media on Sunday.

"I can also imagine what it has done for the Danish team, their bond. We are talking about the things we have been through but what they went through that day – the way their captain (Simon Kjaer) was and the way the group was – and how that would have connected with their supporters, that's pretty powerful".

"They are riding a wave of emotion for certain and that's a powerful force that's coming to Wembley. Those things definitely have an impact on your thinking", he added.

England has not made it to the final of a major football tournament since winning their only World Cup title in 1966. But after defeating Germany for the first time in a knockout game in 55 years, and demolishing Ukraine 4-0 in the quarters, they seem to have overcome their traditional jitters.

England made it to the semifinals of the 2018 World Cup in Russia under Southgate but lost to Croatia in what was an unexpected result.

Southgate said that he won't be pleased with a similar result and wants nothing less than the trophy this time round.

"We've knocked off so many hoodoos or perceived barriers already and I feel like this group of players will feel this is just the next challenge", Southgate said.

"We won't feel totally satisfied if it's just a semifinal for us whereas maybe three years ago, although there was massive disappointment after the semifinal (at the World Cup), there was a feeling we'd come a long way", he said. "Now we've replicated what we did there, but that won't be enough to fulfill the group. That's a positive sign".

Southgate also believes that playing at Wembley will give England the edge because the crowd will be right behind them.

He said: "It's great to be coming back now. To go and have that different environment, preparation, focus was definitely helpful. But now to be coming back to Wembley is a great thing for us. It's not for me to tell the fans how to be or what to be".

"They found a pretty good way of doing that in the last game. So just be as they have been really and in the end the responsibility is on us to play well and affect the emotions in the stadium. But without a doubt the two things fed off each other in the last game. That can only be helpful for the team", he concluded.

"After the exit of Belgium and France, England is the big favourite to claim the title now. Both Kane and Southgate will feel disappointment for many, many years if they don't win the tournament this year", he told Sputnik on Monday.

"Southgate and his players have done all the right things - the tactics have been spot on, Kane has found his touch, the team is focused and delivering as a unit. If they keep the momentum going for two more matches, there's no doubt that England will emerge as the Euro champions", he added.

What Do Football Fans Eat During EURO-2020?