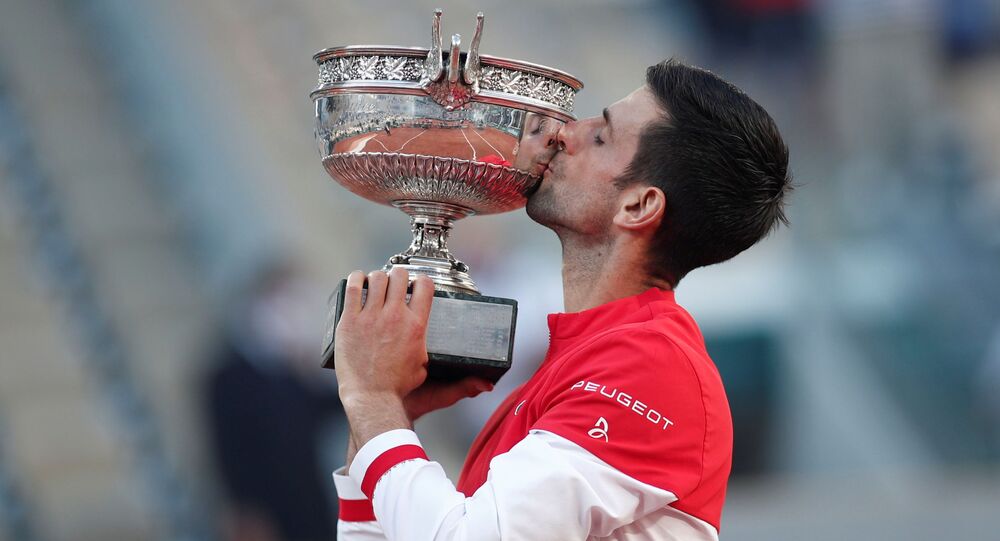 Widely regarded as the greatest returner in tennis history, Serbian legend Novak Djokovic holds the record for spending most weeks (325) as No. 1. As per Andre Agassi and Maria Sharapova's former coach Nick Bollettieri, Belgrade-born Djokovic is the "most complete player ever" and the "most perfect player of all time".

World No. 1 Novak Djokovic made history on Sunday by becoming the first man in 52 years to win all the Grand Slams at least twice. With his victory against Stefanos Tsitsipas of Greece in a five-set epic in the French Open final, Djokovic also captured his 19th Grand Slam title.

He is now just one win shy of Rafael Nadal and Roger Federer's all-time record of 20 Majors.

Djokovic's victory over the Greek youngster Tsitsipas was truly remarkable, considering that he was two sets to love down in the match and had his back to the wall. But the Serbian defied the odds, as he rallied to claim a 6-7 (6), 2-6, 6-3, 6-2, 6-4 win in four hours and 11 minutes.

© AFP 2021 / ANNE-CHRISTINE POUJOULAT
Serbia's Novak Djokovic poses with The Mousquetaires Cup (The Musketeers) after winning against Greece's Stefanos Tsitsipas at the end of their men's final tennis match on Day 15 of The Roland Garros 2021 French Open tennis tournament in Paris on June 13, 2021.

Former greats of the game, including Andy Roddick, Rod Laver, and Patrick McEnroe congratulated Djokovic on his historic win and said that he fully deserved the victory because he fought hard and made it possible.

Physically and mentally dominant. Hardest player in history to attack through the court. No holes in his game. No holes physically. Can’t break his mental belief …… Well deserved @DjokerNole

The most complete male tennis player of all time is @DjokerNole

​35-year-old Djokovic, who turned professional in 2003, is the only player to win all the "Big Titles" on the ATP Tour – all four Grand Slams, all nine ATP Masters tournaments, and the ATP World Tour Finals.

The Australian Open, Roland Garros, Wimbledon, and the US Open are the four Grand Slams. The nine ATP Masters events are tournaments ranked below Grand Slams and are played in Indian Wells, Miami, Monte Carlo, Madrid, Rome, Toronto/Montreal, Cincinnati, Shanghai, and Paris. The ATP World Tour Finals is a season-ending tournament, which features the top eight players of the year.

Reacting to the match, former tennis player Vishal Uppal, who represented India in the Davis Cup, told Sputnik: "Great victory. He displayed all the qualities of a champion, the way he fought back, never stopped believing was truly amazing to watch".

"He is one of the greatest of all time. This game has given so many legends to the world of sports, it's tough to say who is the greatest, as they have contributed immensely to the sport and all have impacted the lives of millions across generations", he added.

But what are the 19 reasons that make Djokovic the greatest of all time (GOAT)?

1. Djokovic is the only player to win the French Open after defeating Nadal in the tournament. In 2009, Robin Soderling lost the final to Federer after beating the Spaniard in the Round of 16, while Djokovic was defeated by Swiss Stan Wawrinka in the 2015 final after his quarter-final win over Nadal.

2. Djokovic is the only player to have beaten Nadal eight times on the clay. He has defeated the Spaniard twice at Roland Garros, and in all three clay-court Masters 1000 events.

4. Djokovic is the only player to beat Federer thrice at Wimbledon.

5. He has won seven Grand Slam titles since turning 30 in 2016. Djokovic now holds the record for winning the most Grand Slams in the Open Era after becoming 30 years old.

6. With his win over Nadal in the French Open 2021 semis, Djokovic registered his eighth win over a defending champion in a Grand Slam tournament - an all-time record.

7. Djokovic is the only player to hold all four Grand Slams on three surfaces at the same time. He won Wimbledon (grass), US Open (hard) in 2015 before winning the Australian Open (hard) and the French Open (clay) in 2016.

8. The Serb is the only player to compete in six finals at each of the four Grand Slam tournaments.

9. He has reached at least three consecutive finals at all four Grand Slams and is the only man to achieve such a feat in tennis history.

10. Nole, as Djokovic is popularly called, has made it through to at least nine semi-finals at all Grand Slams. No one had done this before him.

11. Djokovic has won nine Australian Open singles titles during his 18-year career, the most by any player in history.

12. He has won a record 12 Grand Slam titles on hard courts. He has won nine Australian Open titles and three US Open trophies.

13. In 2015, Djokovic won six ATP Masters titles, a feat unmatched by anyone to date.

14. In the same year, he progressed through to 15 consecutive ATP finals. This is a record for most finals reached in a single year.

15. Djokovic went undefeated against top-10 players in 2015, a feat unmatched by any other player in any other season.

17. Djokovic has won each of the nine ATP Masters events twice. He is the only player to achieve the "Career Golden Masters" feat, that is, to win all the Masters trophies twice.

18. The Serb also holds the record for playing the longest final at three Grand Slam tournaments, namely the Australian Open (5 hours and 53 minutes), Wimbledon (4 hours and 57 minutes), and the US Open (4 hours and 54 minutes).

19. Novak also holds the record for accruing the maximum ranking points in the history of the men's game, taking his total to 16,950 points in 2016. No one before Djokovic could reach 16,000 points on the ATP tour.

Talking to Sputnik, Jaideep Mukherjee, India's former Davis Cup captain, opined: "Djokovic has a solid chance to win a Calendar Slam and if he succeeds in winning both Wimbledon and US Open this year, he will surely become the greatest of all time".

Nadal and Djokovic Prepare to Meet in French Open Semis, But What Makes Their Rivalry So Great?