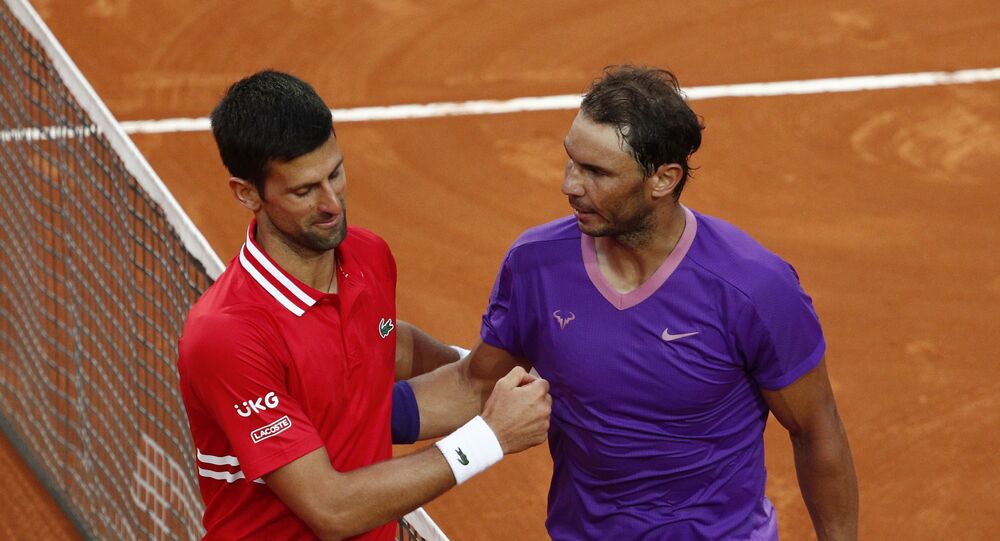 Nadal and Djokovic Prepare to Meet in French Open Semis, But What Makes Their Rivalry So Great?

World no.1 Novak Djokovic and Rafael Nadal are set to meet each other on Friday for a record 58th time. It will also be their ninth meeting at the French Open in Paris.

Ever since he burst on the scene as a teenager in 2005, Spain's Nadal has virtually owned the French Open, winning a record 13 titles in Paris and compiling an astounding 105-2 win loss record.

But only two men have beaten the southpaw in the tournament, one of them is Djokovic, who stunned him in the quarterfinals in 2015, and Robin Soderling of Sweden, who did the same in the last 16 in 2009.

Nadal won their most recent clash in the final of the Rome Masters on 16 May after defeating Djokovic in a thrilling three-set classic.

With his fifth consecutive clay-court triumph over the 18-time Grand Slam champion Novak, Nadal became the first man to win at least 10 titles at four different venues in tennis. He has 13 titles at Roland Garros, 12 in Barcelona, 11 in Monte Carlo, and 10 in Rome.

Despite his victory over Djokovic in the Italian capital, it's the Serb who still holds a 29-28 edge over Nadal in their career head-to-head meetings.

However, when it comes to the French Open, the Spaniard has been utterly dominant, garnering a 7-1 lead over Djokovic at the famed Clay Court Slam.

Regarding their clashes on clay, Nadal once again holds a massive 19-7 advantage. The left-hander has also outclassed and outperformed Djokovic in nine of the 13 finals they have played on the dirt.

On the other hand, Djokovic has been the most dominant player on the hard courts for more than a decade and he has a massive 20-7 lead over the current French Open champion on the surface.

While on grass, their record stands at 2-2 with Djokovic winning their last encounter on the slippery surface in the semifinals of Wimbledon in a five-set epic in 2018.

Both players have won a record 36 Masters (ATP tournaments ranked below Grand Slams) titles each. Nadal has won 20 Grand Slams to Djokovic's 18, but the Serb is a year younger to Nadal, who celebrated his 36th birthday just a few days ago during the event in Paris.

According to former player Vishal Uppal, who represented India in the Davis Cup, the two superstars are virtually inseparable, barring their mastery on their favoured surfaces.

With nearly nothing to differentiate them as far as shot making, versatility, doggedness, and the hunger to win are concerned, the next few years of their rivalry could possibly decide the fate of the greatest of all time (GOAT) debate in tennis.

However, Uppal doesn't think that Djokovic and Nadal's rivalry is the greatest in men's tennis. But he agreed that their rivalry is indeed special.

"Federer-Nadal is a bigger rivalry because it has had an incredible impact on the growth of tennis," he told Sputnik.

"Two great athletes going hard at each other is always amazing to watch. Both Nadal and Djokovic are trying to get past Federer's record of Grand Slams which makes it very interesting."

"Federer on his own is trying to add a couple more Grand Slams in his kitty to make their task more difficult. We are witnessing three of the greatest tennis players chasing history and trying to stay one up on the others," he added.

On the other hand, seven-time national tennis champion Gaurav Natekar, who won a gold medal at the 1994 Asian Games in Hiroshima argues Djokovic and Nadal's rivalry is the greatest.

"If you look at the sheer number of times they have played each other, and the kind of intensity, drama and never say die attitude the two bring with them to the court, their rivalry becomes the greatest by default," he told Sputnik.

"Both Nadal and Djokovic have pushed each other to the limit and they have actually made each other grow as tennis players, as human beings, not only game-wise but also mentally and emotionally."