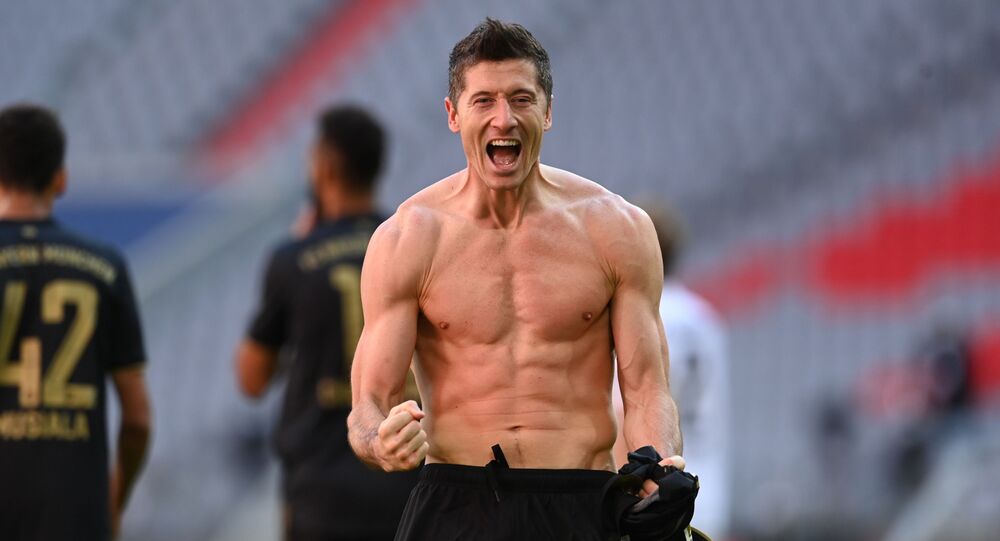 Widely regarded as the best striker in the world, Bayern Munich frontman Robert Lewandowski scored 48 goals in 39 games across all competitions last season. In 2020, the Polish captain broke Cristiano Ronaldo and Lionel Messi's duopoly after he was named the 'Best Men's Player' by football's governing body FIFA.

A prolific goal scorer, Lewandowski has the extra pace, quick movement, nimble feet and extraordinary strength to score goals at will and that's why he has become the world's best striker over the past decade.

Unlike Messi, known for his world class free-kicks, and Ronaldo, proficient in scoring the most insane headers, Lewandowski is believed to be the greatest finisher because of his uncanny knack of never missing a goal.

Certainly he is the most complete, most ruthless and unpredictable striker as he can outsmart and outfox his opponents with his clever tactics on the field.

Last year, Lewandowski made history as he became the first player to achieve record scores in the Bundesliga, UEFA Champions League and the German Cup, while holding all the three trophies Bayern had previously won in the three competitions.

Recently, Lewandowski broke a record that had stood for nearly half a century: with his 41st goal of the season against Augsburg, Lewandowski exceeded the record set by Gerd Müller, who scored 40 goals in a single season in 1971-71. With 277 goals, Lewandowski is also the second-highest goal scorer in Bundesliga history, behind Müller who scored 365 goals during his 16 years at the club.

Nabi maintains that Ronaldo is the best striker in the world because he has already proved himself at three different clubs. Not only has Ronaldo won trophies with Manchester United in England, but he has also enjoyed tremendous success at Real Madrid and Juventus.

“On the other hand, Lewandowski has only played in the Bundesliga and he would have to prove himself in other leagues of the world before being considered the best striker in the world," Nabi tells Sputnik.

"Lewandowski is one of the best, and maybe the best striker in the world. He scores goals in almost every game and, of course, I think he deserves to be at the top and spoken about with Messi and Ronaldo," David Alaba, his teammate and Bayern defender said.

There are arguments both for and against Lewandowski's claim to be "world's best striker" but here are the reasons the Bayern goal machine seems to be the undoubted No 1.

Present and former players, pundits, and fans - all would agree that consistency is a barometer of a player's greatness and Lewandowski has been breathtakingly consistent.

Like Ronaldo and Messi, who are considered the finest models of consistency, Lewandowski has made this important trait his forte.

The last time Lewandowski missed scoring at least 20 goals in all competitions was in 2010-11. In eight out of the 10 seasons in the past decade, Lewandowski has netted more than 30 goals, and he has exceeded the 40-goal mark in the past six years consecutively. These numbers are not just outstanding, but unheard of.

Lewandowski Not Only Scores Goals, But Creates Them Too

While playing, the Bayern striker's primary objective is to score goals, but he is not just a goal scorer. In fact, like Messi, who contributes greatly to Barcelona's triumphs with his assists, Lewandowski can easily be termed football's Assist King because he has been successful in helping his teammates on 128 occasions during his long club career in which he has played 630 matches thus far.

Even the most enthusiastic Messi and Ronaldo fans would agree that Lewandowski is by far the best penalty taker in the sport. During his career, the Warsaw native has stepped up to take penalty shots 68 times and he's missed only six times, having scored an incredible 62 times.

The Pole is the third-highest goal scorer in UEFA Champions League - behind the Portuguese Ronaldo and Argentine Messi who have scored 134 and 120 goals respectively - having netted 73 goals in his tournaments. His outstanding toll for Dortmund and Bayern have come in just 51 matches, an average of a goal every 0.7 games.

To put this achievement into perspective, no one - not even Messi or Ronaldo - has a better goal-scoring average in the Champions League, than Lewandowski.

Former forward Abdul Khalique, who represented India in the 1998 Bangkok Asian Games, is highly impressed by Lewandowski's skills, capacity and talent. He agreed that he is indeed the best striker in the world, but lacks the adoring fan base that Messi and Ronaldo have right now.

"There's no doubt that Lewandowski is the finest striker on the planet and whatever he has done for Bayern, especially in the past two seasons, has been incredible," Khalique told Sputnik.

"Despite his incredible feats, extraordinary goals and a number of titles, Lewandowski has never enjoyed the kind of adulation that Messi or Ronaldo have enjoyed during their career,” he adds.

“One of the reasons for that could be that Messi's play is elegant and looks like poetry in motion - especially when he is in full flight. Lewandowski, on the other hand, is more like [tennis champion] Rafael Nadal: ruthless, but highly productive."

Khalique, however, believes that Lewandowski deserves all the accolades that he is getting and sooner rather than later will be as popular as Messi and Ronaldo among the fans.