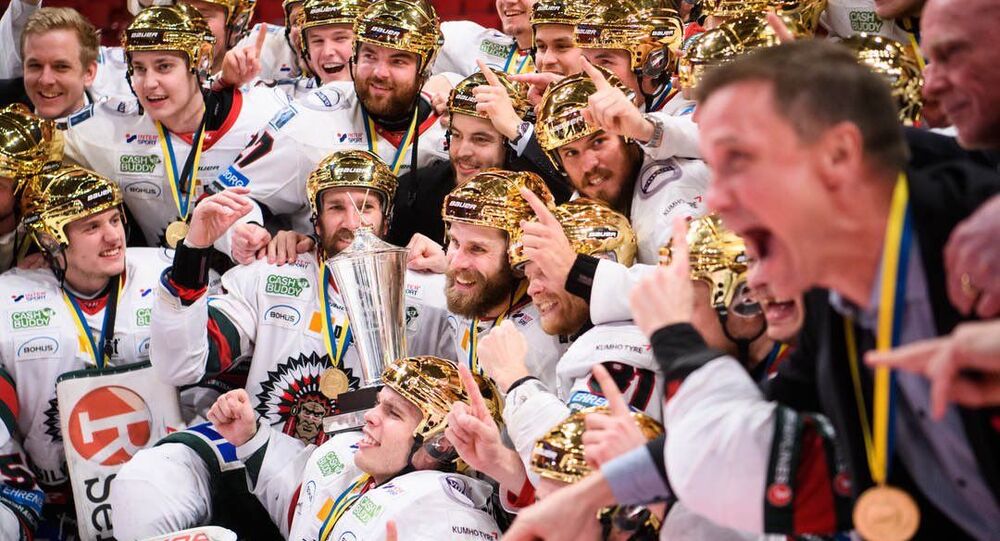 And Then There Were None: Swedish Hockey Club Drops Indian Logo to Avoid Offending Native Americans

Ironically, the Indians were chosen specifically to avert any reference to firearms, unlike cowboys, in an attempt to reflect the Frölunda ice hockey club's nickname, “the Wild West”.

After long deliberations, the Swedish ice hockey club, the Fröluna Indians, has decided to remove the Indian both from its logo and its name amid pressure from activists and claims of “racism”.

The Indian has long been questioned as “cultural appropriation” disrespectful to Native Americans.

The club announced its ambition is to change the logo starting from the 2021/2022 season, stressing that it will merely ditch the name and the logo, “but not the spirit”. For reasons both practical and financial, the Indian will stay on the jerseys until the end of the season.

“Changing the logo will not be an easy process and the association will not take it lightly either. The strength of the upcoming change work is that the club's brand, values and soul do not rest in a symbol. Frölunda HC is so much more and bigger than that,” Frölunda said in a statement. “The board realises that this message stirs emotions, but at the same time rests confident that the decision is an investment in the future,” Frölunda wrote.

Frölunda has had the Indian as its logo and the nickname Indians since 1995, a reference to the success years of the 1960s, when the club was nicknamed “the Wild West”, which in turn was a nod to its home district of Västra (West) Frölunda in Gothenburg.

​The decision sparked mixed feelings among players and fans alike.

“I, personally, think it's sad that the Indian is disappearing even if I understand the decision. I hope that in some way you still do not wave away that part of the story completely,” former Frölunda player Robin Figren tweeted.

​By contrast, supporter Jonas Åhlström, who runs the site Sitting Bulletin welcomed the decision. Ironically, the name of the site, a wordplay on the famous Indian chief who defeated Lieutenant Colonel George Armstrong Custer at the Battle of the Little Bighorn, would apparently also have to go for the very same reasons.

“Finally, I have been waiting for this for several years. Having an Indian as a club symbol feels out of place and disrespectful to the indigenous people of North America. You cannot just take a symbol from another culture, it is also something that is taken from the North American supporter culture and does not suit the Swedish supporter culture,” Jonas Åhlström told the newspaper Aftonbladet.

He, too, underscored that the reception is “very mixed”.

Marco Viera, the chairman of the supporter club Goa Gubbar (“Goodfellas”), belongs to the latter camp.

“I think it's tragic and ridiculous. It is with the Indian that Frölunda has experienced all the success, so they're shooting themselves in the foot. I feel sorry for all the children fans, there are many who have bought souvenirs and are starting to like the team for the Indian. I see no problem with the Indian, it's trifles. It's almost like starting a new team,” Viera said.

Previously Frölunda captain Joel Lundqvist had spoken in defence of the Indian.

“For me, the Indian is a warrior, a hunter, a tough one. I think it has been a suitable name to have. It would be sad to leave the Indian behind,” Lundqvist said.

Similar examples of changes include the NFL club Washington Redskins discarding the franchise's name, whereas the NHL club Chicago Blackhawks, whose logo also features an Indian, banned Native American costumes in the stands to appease the vocal critics. The Cleveland Indians baseball team is reportedly also considering a name change.

Sweden's sport world was recently rocked by another divisive declaration, as the ladies' national football team announced its decision to kneel in solidarity with the Black Lives Matter movement, which also sparked mixed reactions.