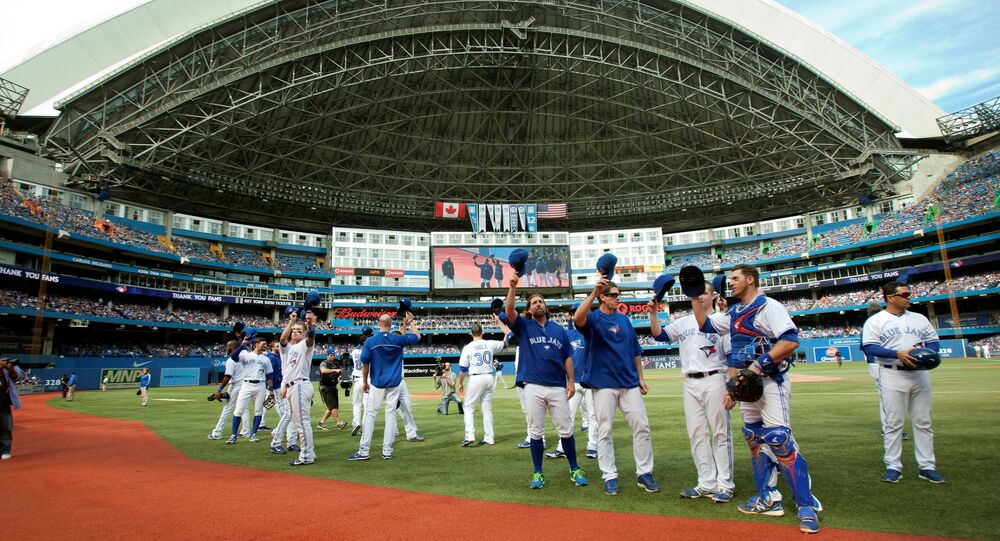 Earlier this month, Canada’s sole Major League Baseball team, the Toronto Blue Jays, was approved to train at the Rogers Centre during the coronavirus (COVID-19) pandemic, with no 14-day quarantine required for those entering the country. The club later moved to get federal permission to hold regular-season matches at their downtown facility.

A request filed by Canada’s Blue Jays baseball club to hold Major League Baseball (MLB) regular-season games at Rogers Centre in downtown Toronto amid the ongoing coronavirus pandemic in the country was rejected by the federal government on Saturday.

On 2 July, in response to MLB restart plans during the COVID-19 pandemic, the Blue Jays were granted permission to hold their preseason training camp at Rogers Centre, formerly known as the SkyDome, in Toronto, with no requirement for a 14-day quarantine, but under condition that the baseball team personnel remain isolated within the the stadium and adjacent facilities during the training period.

The Minister of Immigration, Refugees and Citizenship, Marco Mendicino, argued that hosting regular-season matches would expose Canadians’ health and safety to a higher risk than a closed training camp.

“However, unlike pre-season training, regular-season games would require repeated cross-border travel of Blue Jays players and staff, as well as opponent teams into and out of Canada. Of particular concern, the Toronto Blue Jays would be required to play in locations where the risk of virus transmission remains high,” Mendicino said in a statement on Saturday.

The minister said that following the “best-available” recommendations of public health officials, the government has “concluded the cross-border travel required for MLB regular season play would not adequately protect Canadians’ health and safety. As a result, Canada will not be issuing a National Interest Exemption for the MLB’s regular season at this time.”

Acknowledging the importance of professional sports to the country’s economy and to the people of Canada, Mendicino said that the country would not risk the flattened COVID-19 curve, which has been kept low “in large part because of the sacrifices Canadians have made”.

In response to the government decision, Blue Jays president and CEO Mark Shapiro said in a statement on that, although disappointed, the team “completely respects the federal government’s decision” for the safety of fans and players.

“From the onset of discussions with league and government officials, the safety of the broader community — our fans — and the team remained the priority of everyone involved, and with that, the club completely respects the federal government’s decision,” said Shapiro. “Though our team will not be playing home games at Rogers Centre this summer, our players will take the field for the 2020 season with the same pride and passion representative of an entire nation. We cannot wait until the day comes that we can play in front of our fans again on Canadian soil.”

Set to begin 23 July, the MLB 60-game season will now see the Blue Jays as the only team to not play in their home stadium during the 2020 season.