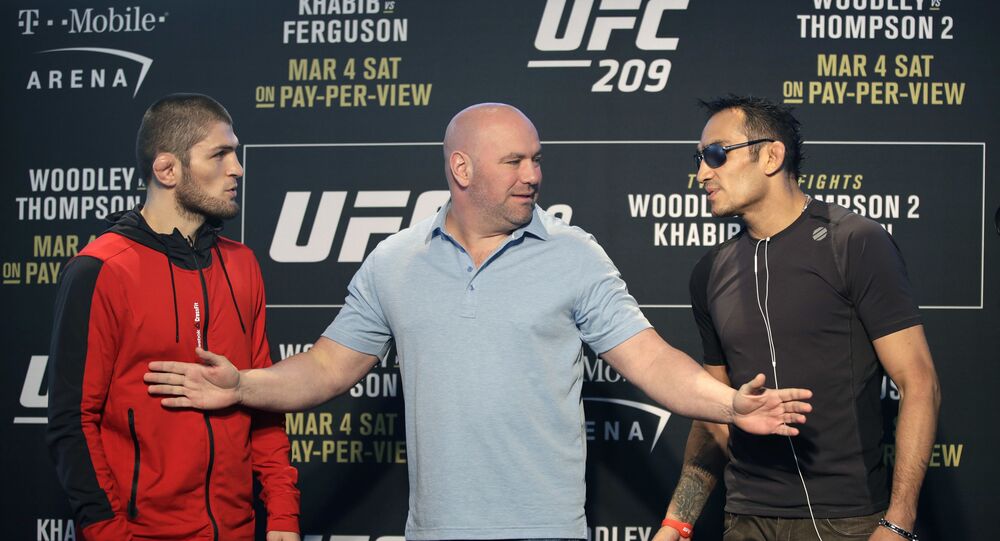 The fight between the two MMA stars, Khabib Nurmagomedov and Tony Ferguson, has already been cancelled several times and many doubt that it will actually take place this April. The fighters, however, have gone the whole nine yards to promote the bout as there is a lot riding on this for both men.

Russian MMA fighter and acting UFC Lightweight Champion Khabib Nurmagomedov could not have shown less respect to the interim UFC belt of his upcoming opponent Tony Ferguson, when he kicked it off the stage during a face off in Las Vegas on Friday.

The fighters took part in a news conference to promote the UFC 249 bout currently scheduled for 18 April. During their heated verbal confrontation, Ferguson laid his interim UFC Lightweight belt down and demanded the Russian fighter do the same with his. Not only did Khabib refuse, but he also went as far as to kick Ferguson’s belt. The American fighter mockingly replied with an ironic bow and a little kiss in the air.

After Tony Ferguson placed his belt down, @TeamKhabib took the opportunity to kick it clear off the stage 🦵 #UFC249 pic.twitter.com/gCwxlu6cTK

So why do they both have championship belts? The answer is a bit run-of-the-mill. Ferguson won his interim championship title in 2017 in a fight with Kevin Lee. He was then expected to meet Khabib for UFC 223 half a year later, but reportedly tore his fibular collateral ligament and was stripped off the title. The Russian mixed martial artist then claimed the UFC lightweight belt after defeating Ferguson’s replacement Al Iaquinta. However, the American fighter still continued to insist that he had never actually lost his interim championship belt. Many would disagree with this statement.

Khabib Nurmagomedov currently holds the longest undefeated streak in MMA with 28 wins and no losses, while Ferguson also has an impressive record. The two have been expected to meet in the Octagon four times, but the fights have been cancelled due to illnesses and injuries on both sides, making the upcoming duel all the more anticipated.