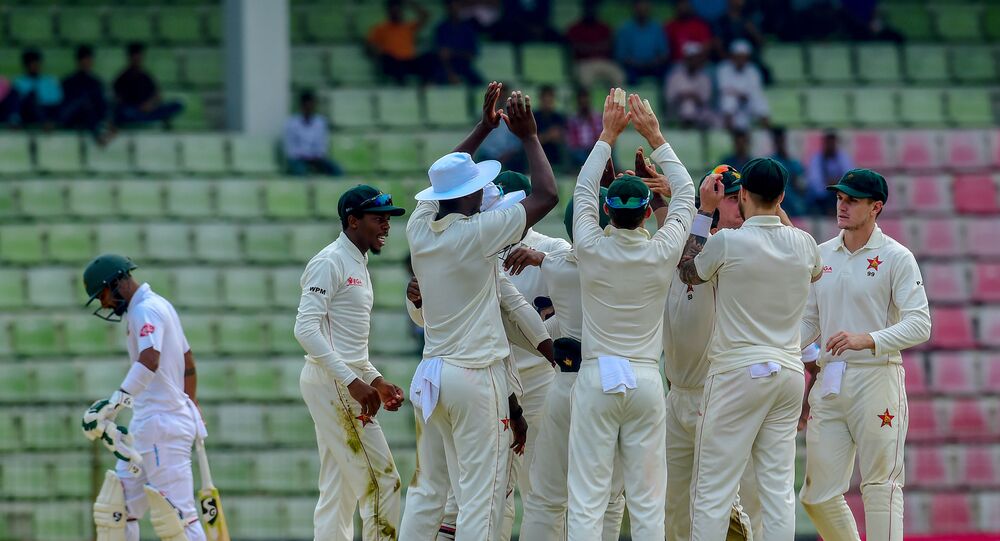 New Delhi (Sputnik): Cricket lovers and supporters of Zimbabwe’s team have turned into a disheartened lot a day after the International Cricket Council (ICC) suspended the Zimbabwe Cricket Team from playing international fixtures citing "political interference" by the country’s government.

The decision by the ICC on Thursday to take away “Full Member” status effectively puts Zimbabwe’s participation in doubt for the qualifiers for the upcoming T20 World Cup in 2020.

The team’s stalwart batsman Sikandar Raza and former captain Brendan Taylor took to social media to express their dismay at the ICC’s decision.

@ICC It's heartbreaking to hear your verdict and suspend cricket in Zimbabwe. The @ZimbabweSrc has no government back round yet our Chairman is an MP? Hundreds of honest people,players, support staff,ground staff totally devoted to ZC out of a job,just like that. 💔

A number of fans too criticised the ICC’s decision and hoped the decision would be revoked.

Harsh on Zimbabwean cricketers who are sticking their neck out from domestic turmoil and scarce resources. Blow to their morale. Hopefully situation will improve as we really need strong Zimbabwean team for betterment of cricket

I'm heartbroken, no cricket in Harare for years to come. The only matches I watched this year were against the UAE 😑

This is a bad news especially for a country like Zimbabwe which is already going through crisis since long. Sometimes politics play a key role in destruction of so many progressive aspects. I think ICC should be considerate towards such countries.

Some fans, however, remained supportive of the ICC’s decision of standing up against political interference in cricket.

Good decision... No outside party should interfere in the board's decision.. Zimbabwe cricket is corrupt to its root , it immediately needs an overhaul .

The ICC’s board in a unanimous decision found that the Zimbabwe Cricket board had failed to provide a process for free and democratic elections. The board also decided to suspend all kinds of funding to Zimbabwe, alleging that the country’s government was interfering with the affairs of the cricket board.

Zimbabwe Cricket have been suspended with immediate effect.https://t.co/lfOC8J5LRm