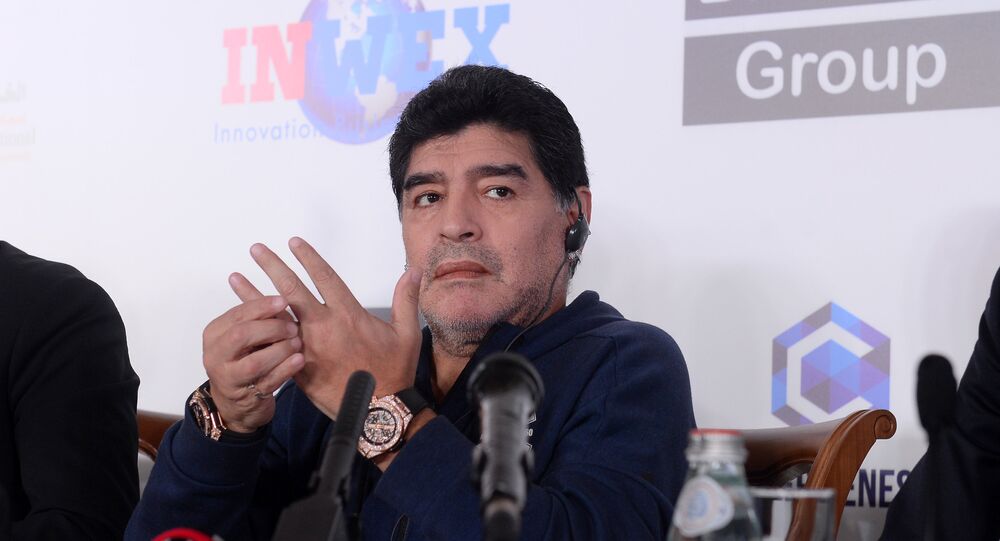 Maradona has slammed the US' attempts to interfere in Venezuela's domestic matters, as Washington is calling for Maduro to resign and supporting self-proclaimed interim President Juan Guaido amid a political crisis in the Latin American country.

Diego Maradona, a football legend now training the Mexican club Dorados de Sinaloa, is now facing an investigation by the Mexican Football Federation (MFF) over alleged violations of its ethics code. According to the MFF, he might have violated several of the code's articles with his harsh public statements during a press conference after a victory over rival Tampico Madero on 31 March.

© AP Photo / Ariana Cubillos
'Who Are These Yankees?' Soccer Icon Maradona Blasts US Meddling in Venezuela

The Federation noted that it will look into Maradona's actions and will take the necessary steps once it decides if he violated the ethics code.

During the presser, the football legend devoted his team's victory to "Nicolas Maduro and to all Venezuelans who are suffering". He also slammed Washington's attempts to meddle in the Latin American country's domestic affairs and compared the US president to an Argentine ventriloquist puppet that was famous in the 1970s for its "rogue, childish personality", as Latin American TV channel teleSUR described it.

US President Donald Trump earlier refused to take the military option to resolve Venezuelan political crisis off the table. Washington has repeatedly called for the resignation of constitutionally elected President Nicolas Maduro and has, along with numerous allies, recognised self-proclaimed interim President Juan Guaido.

READ MORE: Maradona Speaks Out on Battle With Cocaine as He Takes New Job at Mexican Club

Caracas has repeatedly slammed the US' attempts to meddle in Venezuela's internal affairs and accused Washington of preparing a coup and sabotaging the country's key hydroelectric power plant, the failure of which led to multiple blackouts in March.

Russia, China, Turkey and numerous other states have criticised US actions and refused to recognise Guaido, supporting legitimate President Maduro instead.