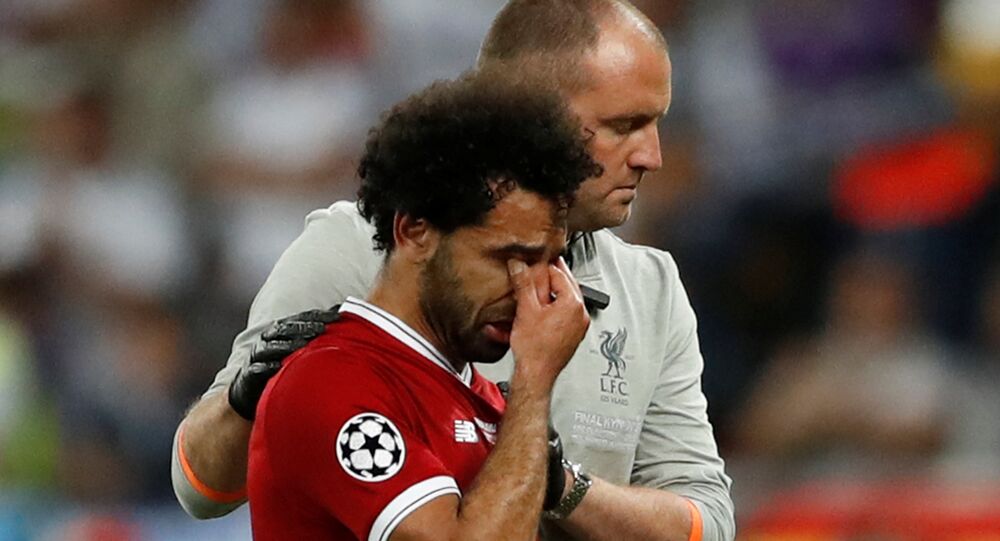 Lawyer Bassem Wahba is angry and he isn’t willing to shut his eyes to what he believes was an injustice done to his fellow countryman, Mo Salah.

In a similar case, Ramos also clashed with Liverpool’s goalkeeper Loris Karius but UEFA announced that it is not going to take any action against Ramos.

During the final match of the Champions League, Salah was injured by Sergio Ramos, who twisted his arm and made him land on his left shoulder causing a ligament injury.

© Sputnik / Stringer
Ramos' 'Dirty Tricks': Thousands Sign Petition Against Real Madrid Captain
Salah was forced to leave the game in tears after playing for only 28 minutes.

What followed was a somewhat disastrous game for Liverpool as their main star left and the team struggled until it finally lost 1-3 in favor of Real Madrid.

Following the incident, many fans took to social media to express anger at Sergio Ramos, who is known to use physical tricks to win matches. Thousands of people signed a petition on the Change.org website asking to punish Ramos for his action.

Now an Egyptian lawyer who recently made an appearance on the Egyptian television channel Sada El-Balad announced that he had filed a complaint to FIFA and accused Ramos of deliberately injuring Salah.

"Ramos intentionally injured Mo Salah and should be punished about his actions," he claimed. "I've filed a lawsuit and a complaint to FIFA.

"I'll ask for compensation, which could exceed €1 billion, for the physical and psychological harm that Ramos gave Salah and the Egyptian people,” Wahba said.

© REUTERS / Rafael Marchante
'I love Him, He Looks Like Messi' - Ronaldo Praises Mo Salah Before Champions League Final
In case of victory in court, Wahba promised to transfer the money to the Long Live Egypt fund. The lawyer did not specify which court he had appealed to.

It remains to be seen if Liverpool will make any noise about the incident. So far it seems that only the fans are voicing their criticism and saying that Ramos’ actions set a bad example for future games and younger generations of football players.

Could the English clubs and Coach Jurgen Klopp have been more vocal if, say, the injured player in question was Sir David Beckham or Steven Gerrard?

Egyptian national Mo Salah has been a success at Liverpool all season, but now it is uncertain whether he will be able to play in this summer’s World Cup in Russia or if his dream will be crushed.