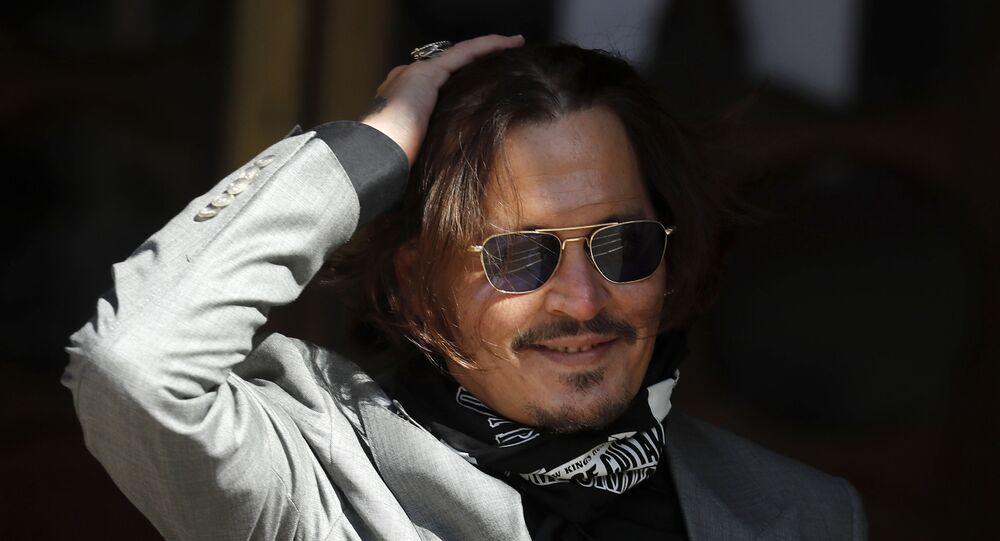 Late last month the famous Hollywood actor lost his right to appeal against the court's ruling forbidding him to file his libel lawsuit against the UK tabloid The Sun and its publishers, who in an article back in 2018 called him a "wife-beater".

In regard to the infamous May 2016 fight that reportedly was the marriage's last straw, Heard and her team testified in multiple legal cases that Depp threw a phone at her face and trashed their penthouse kitchen.

However, the actor's lawyers claim that the graphic depictions of the damage-which include broken candelabras, glass strewn on the floor, and red wine splattered on the walls and carpets-contradict what police officers have seen.

According to the report, after Heard's friends dialed 911 twice, four different LAPD officers came to the apartment in downtown Los Angeles within two hours. Within the last month, the first two cops have given new depositions, stating that they swept the property but found no injuries, vandalism, or any other evidence of a crime.

According to the Daily Mail, the unseen footage from a second set of responding officers who had cameras on as they entered Heard and Depp's former marital home later that night shows them walking into a corridor leading to a tidy kitchen and living room, which is decorated with ornaments, fresh flowers, stacks of books, and various candles and candelabras.

As seen in two three-and-a-half-minute videos published by the outlet, the officers do not seem to notice anything unusual, and there are no visible signs of injury, disarray, or staining on the floors or carpets.

One of Depp's lawyers, Adam Waldman, reportedly told the outlet that the video shows there was no wrecking spree and that Heard's version of the evening is untrustworthy.

"Amber Heard and her friends described a chaotic, messy crime scene but the newly released LAPD bodycam videos unambiguously show that the penthouse was utterly undamaged and that their testimony was one more grandiose lie," Waldman said.

Depp is suing his 34-year-old ex-wife for $50 million over a Washington Post op-ed in which she portrayed herself as a domestic abuse survivor, and the two are set to fight the court battle in Virginia.

While Depp, 57, was not named in the December 2018 report, he claimed he was fired from the iconic role of Captain Jack Sparrow after the "hoax" account led to allegations that he was the abuser.

After Heard gave graphic testimony about how her former husband threw a phone in her face and ripped out clumps of her hair, the incident on May 21, 2016, was added to the list of abuse. The altercation is said to have occurred in penthouse 3 of the Eastern Columbia hotel, where Depp once owned an entire floor of five adjacent apartments, all of which were accessible through a private elevator.

It was claimed that after Depp's security team broke up the fight, he went into penthouse 5, where Heard kept some of her belongings, to "ransack" them and cause further property damage before eventually leaving the building.

In her own statement on the purported fight that led to Heard getting several bruises, the actress described the scene as full of "heavy silver candlesticks, candelabra sticks" broken and lying all over the floor.

"He broke a lot of glass things that left glass on the floor … when he walked out into the hallway, you could see wine spilled all over the ground and wine on the walls and … and so I knew that at least he had gone through there and was like sloshing wine anywhere," she added back then.

According to the Daily Mail, citing the testimony of police officers Tyler Hadden and Melissa Saenz, a domestic violence expert, arrived 15 minutes after the suspected assault and stated that they swept both apartments but found no bruises to Heard's face or signs of vandalism in the house.

"I did not identify her as a victim of domestic violence," Saenz is quoted as saying to Heard's attorney Elaine Bredehoft last month. "We met with the victim, we checked the location, the husband wasn't there, and that the victim advised us she wasn't going to give us further information."

Saenz also reportedly said that she "did not" spot anything "resembling the damage depicted in Heard's photos," according to the report.

The second police team arrived two hours after Saenz and Hadden visited the apartment, and it is their body cameras that took the purported actual footage of the scene.

As can be seen on the footage, on top of the kitchen island there were lots of candles, candelabras, and a vase of flowers, but nothing seems to have been broken or knocked over.

© AP Photo / Joel C Ryan
Johnny Depp’s Messy Relationship With Amber Heard To Become Subject of Three TV Shows, Media Says
Moreover, the rugs inside the apartment as well as the walls and carpets in the corridor separating Depp's various apartments have no visible stains or puddles, which contradicts the testimony of one of Heard's friends, who stated that although they cleaned up the broken glass after the first police visit, they never dealt with the wine puddle, as it was there by the time of the second officer's arrival.

"You can see clearly in the police bodycam videos that all the items Ms. Heard and her friends claimed Mr. Depp smashed to smithereens with a wine bottle off the island in his penthouse kitchen – glass, fruit, baskets, vases and candelabras – are in perfect condition and tidily in their place," Depp's lawyer said. "Nor does the red wine they claimed that Mr. Depp splashed all over the light-colored hallway carpets and walls exist. These videos prove unambiguously that the first two police officers on the scene told the truth about no damage."

According to the report, the Pirates of the Caribbean star is adamant about continuing to fight and will not consider resolving the pending Virginia lawsuit in a bid to clean his image, which has been repeatedly postponed due to the COVID-19 pandemic.

Meanwhile, Heard's lawyers have reportedly requested the judge to dismiss the lawsuit, claiming that Depp's statements were debunked during the London proceedings.