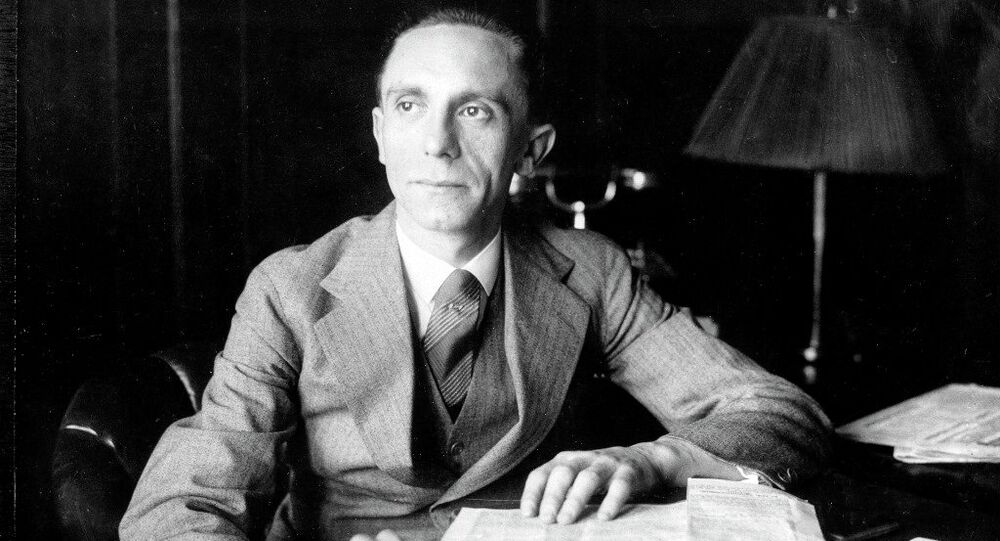 Notorious Nazi Propaganda Minister Joseph Goebbels had a lush piece of land donated to him for private purposes on the Bogensee back in 1936; there, he had a private and secluded refuge built to cater to his whims.

A secluded retreat that was once in the possession of Reich Minister of Propaganda of Nazi Germany Joseph Goebbels is to be given a new lease of life.

The venue that offered a secluded place for one of Adolf Hitler's closest and most devoted associates to reportedly engage in love trysts with various mistresses, including the then film star Lida Baarova, will be converted into an artists' commune with special accommodation for immigrants, writes Berliner Zeitung.

According to the material published by the ambitious project, the now-abandoned Bogensee mansion, comprising over 70 rooms complete with a private cinema, will be converted into a complex that will offer residents a vegan restaurant, non-profit supermarket and homeopathic health centre.

Furthermore, there will be workshops, a children's theatre, a sports hall, and creative workshops that should be suitable for glass artists, wood artists, sculptors and designers. It will also feature also living space designated for the 'disadvantaged in our society', such as immigrants and the disabled.

A museum would also detail the remarkable history of the site.

“We want to build a co-operative community and we want to bring life back there. We want to make it a hotspot for culture and education and health. We want to create an area for an alternative way to live and to work,” Arnim Beutel, a spokesman for LKC Bogensee, was cited by the Daily Mail as saying.

The initiative expects the project to be completed in ten years, and the project's initiators hope the transformed venue will thus hold neo-Nazis at bay.

“I think that far-right people would be deterred from using it as a pilgrimage because of our principals, our beliefs and the way we try to treat people equally.”

'It should be a diverse community, added Beutel, saying that Hitler and Goebbels “would hate it because of course we do the opposite of what they would do”.

LKC Bogensee is already in discussion with a local renewable power company, Barnim Energie, over supporting the scheme, which is anticipated to be costly. A gradual approach to renovation is to be adopted, with the completed estate to house approximately 250 people.

The current owners of the property – the Berlin government – is spending an estimated €230,000 (approximately $275,000) a year on maintaining it.

“The difficulty of this place is this historical weight, and that's a problem. I think we have to give this place a new use. It could be a symbolic way to show how to live with this history,” said Beutel.

Hitler's propaganda chief Joseph Goebbels, who was particularly adept at manipulating the then-novel media of radio and film for propaganda purposes, had been gifted land at the picturesque Bogensee, near Berlin, for his birthday in 1936.

He used the spacious mansion built there to cater to his reportedly voracious sexual appetite.

It was also here that Goebbels wrote his notorious Total War speech, which he delivered at the Berlin Sportpalast on 18 February 1943, as the tide of World War II was turning against Nazi Germany.

In a 1936 diary entry, Joseph Goebbels referred to Bogensee as 'an idyll of solitude' where once could be 'completely left to your own devices'.

Eventually, Goebbels moved his family into the mansion, after he was ordered by Hitler to break off his extramarital affair with actress Lida Baarova.

Funny wasn't it, as Goebbels was obsessed with a Czech actress Lída Baarová who was anything but the blonde blue-eyed Nazi stereotype. pic.twitter.com/CgynIfUL6L

​The family subsequently fled Bogensee for the German capital on 22 April, and ultimately committed suicide, also poisoning their six children, in Berlin on 1 May 1945, as Nazi Germany faced imminent defeat in the war.

After the end of WWII, the property was converted into an East German college for Free German Youth (FDJ), or Freie Deutsche Jugend, formerly the official youth movement of the German Democratic Republic (GDR) and the Socialist Unity Party of Germany.

The mansion fell into disuse after the fall of the Berlin Wall and German reunification in 1990, when the German Democratic Republic became part of the Federal Republic of Germany (FRG) to form the reunited nation of Germany.

The property came close to being demolished, as such options had been suggested in Berlin.
Social Democratic Party of Germany (SPD) politician Sven Heinemann was quoted by German media as saying:

“I am in favour of demolition. I am amazed that the building was not destroyed after the war. "