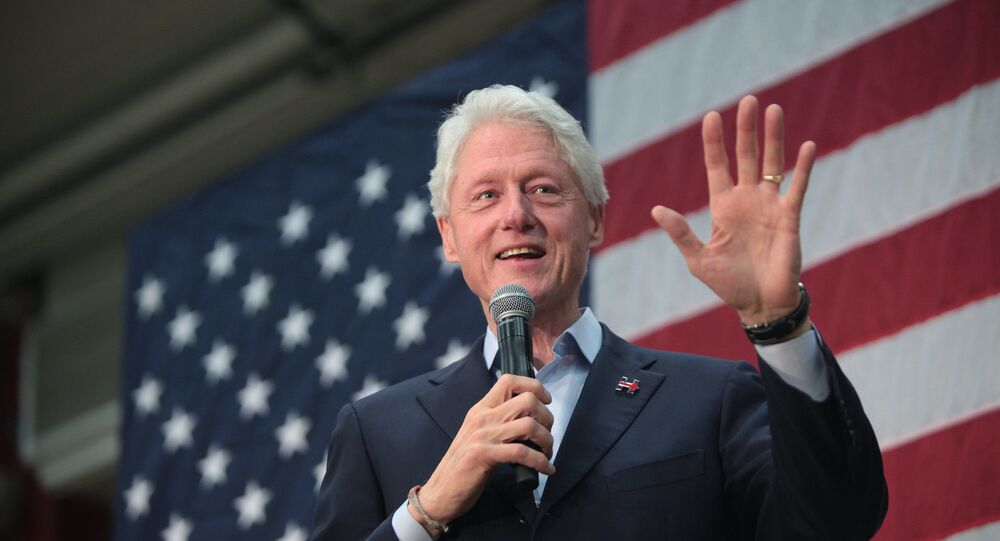 The 42nd president of the United States is just one of the many high-profile figures the disgraced financier maintained ties with. According to Epstein's flight logs, Clinton flew more than a dozen times on the billionaire's private plane, where his alleged victims claim the sexual abuse took place.

According to him, Clinton visited the private island dubbed "Paedophile Island", where Epstein and his friends allegedly sexually abused girls and young women, in January of 2003. Band said it was one of the few times when he declined to accompany the politician.

The purported visit to Little Saint James came a year after Epstein and Clinton went to Africa on a humanitarian trip on board the financier's private plane dubbed Lolita Express. Band went to Africa with the politician. He said back then he had no idea about Epstein's alleged sex crimes. However, after the trip Band told the magazine he started to push Epstein out of the politician's orbit, but to no avail. The adviser recalled how Epstein made ridiculous statements during the trip to Africa, like "boasting that he invented the derivatives market".

After Band got "enough bad vibes" about Epstein he advised Clinton to end his friendship with the financier, but claims he continued to maintain ties with the financier and accepted his donations. In 2006, Epstein donated $25,000 dollars to the Clinton Foundation, Band told the magazine.

Other members of the Clinton family too spent time with Epstein and his life companion Ghislaine Maxwell, who is now awaiting trial in the Metropolitan Detention Centre in New York City.
Band showed Vanity Fair a photo of Clinton's daughter Chelsea posing with Epstein and Maxwell at the wedding of the King of Morocco.

Even after Epstein was jailed for soliciting a minor for prostitution as part of his first criminal case and the press revealed that Ghislaine was his purported accomplice, Chelsea continued to maintain ties with Maxwell and even invited her to her wedding in 2010.

Ghislaine Maxwell
She'd fit right in with all the other Clinton associates pic.twitter.com/8lF0iMVAes

​In 2011, he claims to have instructed Bill Clinton's office to bar Ghislaine from all events organised by the Clinton family, noting he knew that the decision would upset Chelsea and Bill.

"I knew in telling everyone to stop including Ghislaine that Chelsea and her father would be very angry. It made it harder for them to justify being close to her", Band said.

How Has The Clinton Family Responded to These Claims?

A spokesperson for the family refuted allegations that the 42nd president of the United States visited Little Saint James and provided Vanity Fair with "detailed travelogue entries of the period in question that did not contain a visit" to the island.
The spokesperson emphasised that Chelsea Clinton maintained ties with Maxwell only because the two shared a mutual friend, Ted Waitt, founder of the computer hardware company Gateway.

"It wasn't until 2015 that Chelsea became aware of the horrific allegations against Ghislaine Maxwell and she hopes that all the victims find justice. Chelsea was friendly with her because of Maxwell's relationship with a dear friend. When that relationship ended, Chelsea's relationship with her ended as well", the spokesman told Vanity Fair.

As for Doug Band, the spokesman described the former top adviser as a person, who put the Clinton Foundation at risk by "leveraging a world-class philanthropy for his own financial gain".

"No staffer has ever used their role to serve their interests as much as Doug Band", the spokesperson said, adding that he was a valuable member of the Clintons' team.

According to emails published by whistleblowing website WikiLeaks, in 2011 Band accused Bill Clinton, Chelsea Clinton, and her husband Marc Mezvinsky of conflict of interest. Band reportedly wrote that Mezvinsky used money donated to the Clinton Foundation for his hedge fund.

Presidents, prime ministers, royals, billionaires, and entrepreneurs - the financier rubbed shoulders with the some of the most powerful people on Earth. On a 2002 trip to Africa with Clinton he was also accompanied by Hollywood actors Kevin Spacey and Christ Tucker. Several women had earlier made accusations of sexual abuse against him, but сourts either refused to hear the cases or the lawsuits were settled for undisclosed amounts.

In July 2019, Epstein was arrested on charges of running a sex trafficking network of minors. He didn't live to see the trial. On 10 August 2019, he was found dead in his jail cell. The autopsy ruled his death a suicide. Despite the coroner's report, Epstein's death sparked numerous conspiracy theories. According to one, the financier was killed by his powerful friends, who feared they may be implicated in his crimes. Supporters of this theory believe that the Clinton family most likely masterminded Epstein's "suicide".