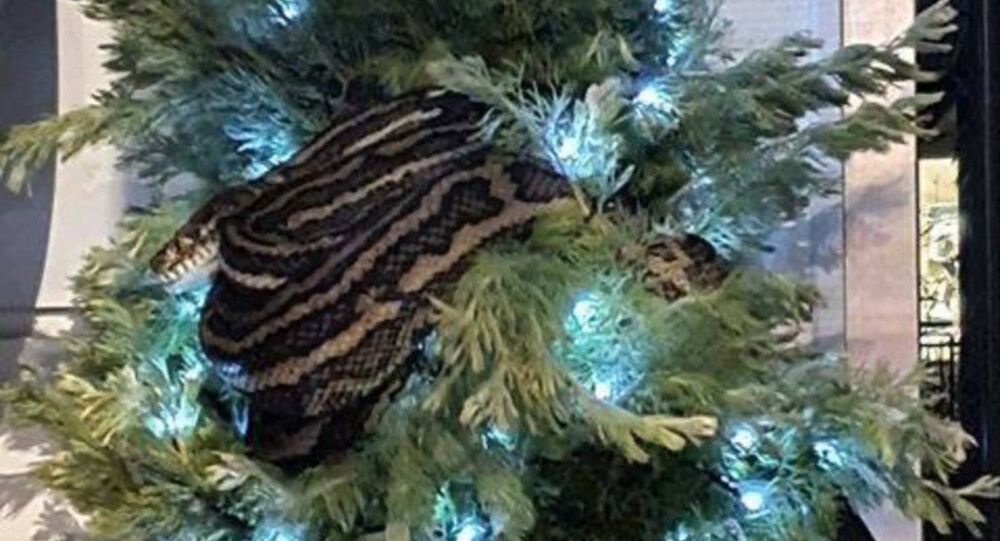 An English woman living in Australia recently experienced some holiday horror after she and her partner noticed their Christmas tree had been adorned with a new, living, breathing, reptilian decoration that definitely wasn’t garland.

Brisbane, Australia, resident Leanne Chapman and her partner were taken by surprise this holiday season after stumbling upon a slithering snake stowed away in a Christmas tree on their balcony.

Unfortunately for her partner, he did not discover the 10-foot python cuddled up within the tree until he was just inches away from the fella.

"We came home from work, and there's a couple of butcher birds that visit every day, and they were just kicking off on the balcony, going crazy," Chapman told Australian network 7NEWS.

Shortly afterward, her partner went onto the balcony to further inspect the disturbance and record the squawking. It was then that he turned around and found the festive python curled up on their outdoor Christmas tree.

"As he's turned around and stepped back, he didn't realize he was leaning on the Christmas tree with the snake wrapped around it,” she said to the outlet.

OMG. Leanne Chapman emigrated to inner-city Brisbane from the UK and is about to have her first Christmas here. She’s got a (live) python in her tree, lucky her ... Really, this is not normal. Pics via @abcbrisbane and Leanne 🐍 pic.twitter.com/loEaPVbPPA

Chapman noted that while they were both shocked by the reptile, they elected to simply leave the python alone rather than phone authorities to have the creature removed.

"It wasn't bothered by us. It just stayed there for a good few hours as we watched it through the window,” she claimed. "We thought it's not going to do any harm. As long as it didn't come in the house, it could stay out there.”

This report comes shortly after a Karl Gaskell, UK man, inspected a "really pungent, rotten fish" smell coming from his Christmas wreath and found a dead snake had been wrapped up in the straw frame.

Unlike the Aussie couple, Gaskell, a father of two, told SWNS that he started to “panic” following the find.

"I suddenly thought if it had come from Asia somehow, poisonous snakes remain poisonous long after they've died,” he told the outlet. Luckily, the UK’s Natural History Museum confirmed to the man and his wife that the dead reptile was a garden snake and not a venomous variety.