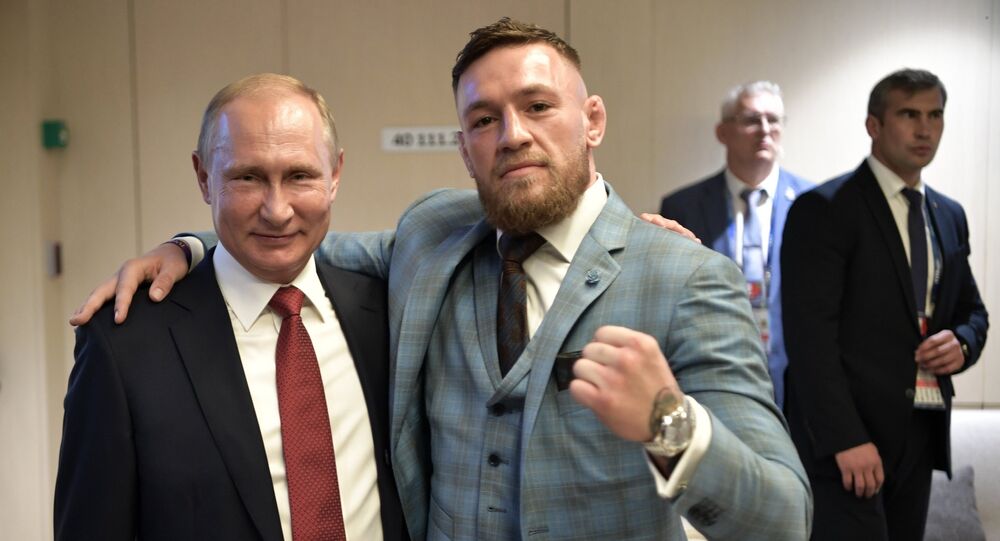 ‘Don't Mess With Vladimir’: Conor McGregor Reveals His Whisky Gift to Putin Was Taken By Security

Irish MMA fighter Conor McGregor revealed that the first ever bottle of his Proper No. Twelve brand whisky, which he handed to Russian President Vladimir Putin during the World Cup final in 2018, was taken by the head of state’s security team in order to test the safety of the bottle’s  contents.

“President Putin's security detail is second to none as I'm sure you know”, Conor said during the press conference in Moscow last week. “You don't mess around with Vladimir”.

“So, I gifted the bottle, I gifted it to his security. So, they had to take the liquid from the bottle to make sure the liquid was safe and it was not maybe poisoned or whatnot and then it was gifted to Vladimir Putin”, the Irish mixed martial artist explained.

While the former two-division UFC champion was unable to share a glass of his McGregor-branded beverage with the Russian president, he said that Putin promised him during their meeting at the World Cup last year that he would try the drink, with the Irish fighter confident that the Russian head of state would certainly enjoy a sip of Proper No. Twelve.

“I'm sure he did have a taste and I'm sure he enjoyed it”, the Irishman added.

Proper No. Twelve whisky was launched in September 2018 and it was revealed this May that it had already received a revenue of around $983 million.

Conor McGregor has not fought for over a year after his fourth-round submission defeat to Russian mixed martial artist Khabib Nurmagomedov, but announced recently that his next UFC battle would take place on 18 January 2020.