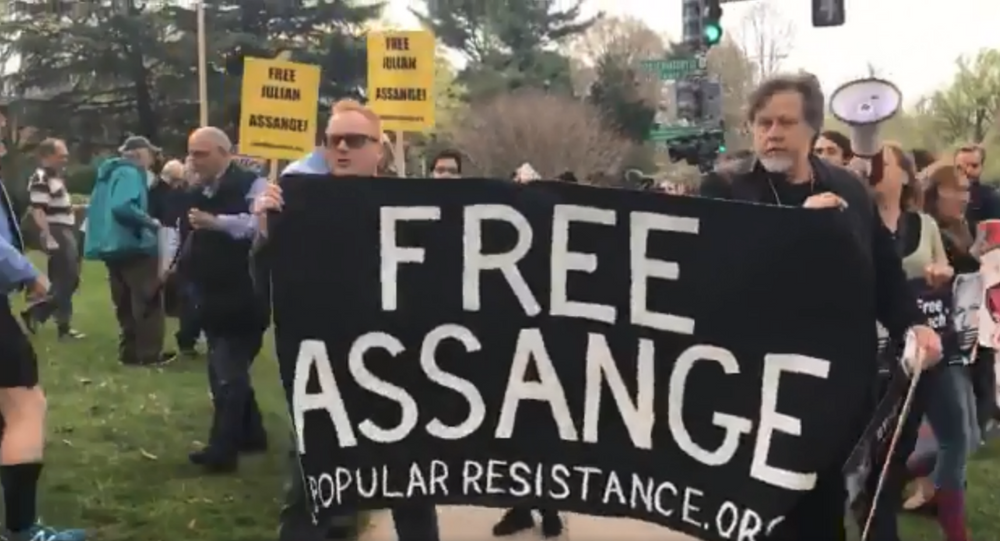 Protestors gathered Thursday outside the British Embassy in Washington, DC, to rally against the recent arrest of WikiLeaks founder Julian Assange in London.

Correspondent Garland Nixon, co-host of Fault Lines on Radio Sputnik, was at the scene, and reported that Code Pink, an advocacy group, led the rally.

Medea Benjamin, co-founder of Code Pink, spoke at the event, stating that American citizens are unaware of their government's actions.

Benjamin honed in on the role played by journalists during the the US-led invasions of Iraq and Afghanistan. She mentioned Judith Miller's reporting on the alleged existence of weapons of mass destruction in Iraq for the New York Times, to which the crowd responded with chants of, "Boo" and "Liar."

Benjamin also credited WikiLeaks for shedding light on the imprisonment and detention of innocent people at the US military's Guantanamo Bay Naval Base in Cuba.

Passing drivers showed support for the protestors "by tooting their horns, rolling down their windows, giving the thumbs-up sign," noted Nixon.

© AP Photo / Carolyn Kaster
Assange Likely to Face Espionage Charges Back in US - Former CIA Officer
Malachy Kilbride, an Irish-American activist, also spoke at the event, petitioning for the release of Chelsea Manning, a former US Army intelligence analyst who released classified information to WikiLeaks. She was arrested in 2010 and sentenced to 35 years in prison in 2013. However, her sentence was commuted by then-President Barack Obama in January 2017, and she was released in May of that year after serving only seven years.

More recently, Manning was jailed for refusing to testify before a grand jury about her role in handing over information to Assange. After a month in solitary confinement, she was moved to the general population jail in Alexandria, Virginia.

Since his arrest, Assange has been charged by US authorities with allegedly aiding Manning in hacking government computers to acquire some of the files she handed over to WikiLeaks. British courts also found him guilty of breaching his 2012 bail conditions.

Assange is expected to face an extradition hearing in May in a UK court.

Kilbride went on to refer to Secretary of State Mike Pompeo, President Donald Trump and Hillary Clinton as "war criminals and liars."

There were a dozen or so DC police officers at the event.

Nixon noted that the protest's theme included Manning's recent arrest as well, noting, Manning is "an integral part of this conversation."