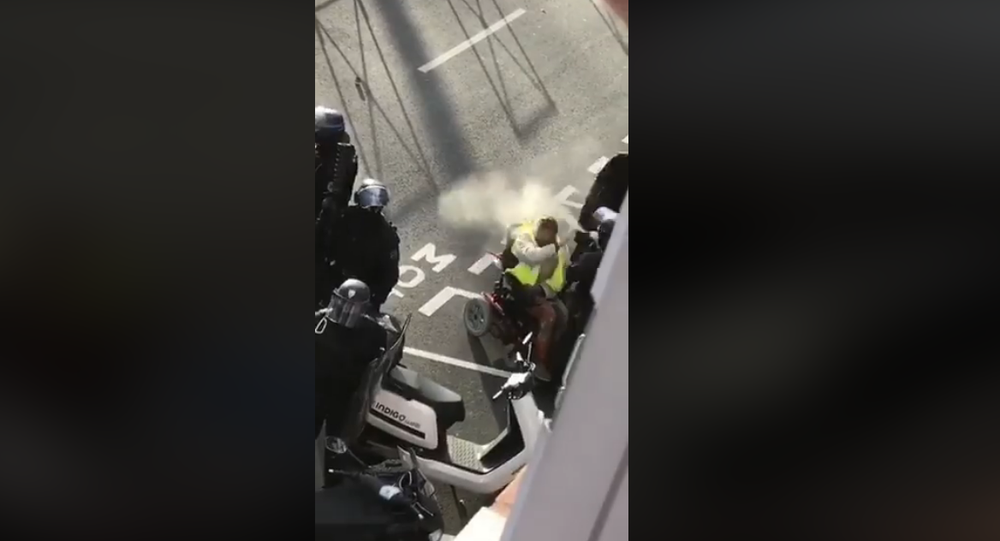 Last weekend, a disabled “Yellow Vest” protester in an electric wheelchair was pepper-sprayed in the face in Toulouse, the capital of France’s southern Occitanie region, reportedly simply for attempting to recover his safety glasses from a police officer.

Footage of the incident, which was shared on Facebook by Marine Pnose on Saturday, has already garnered almost 800,000 views. An unidentified protester can be seen arguing with a French police officer over a pair of protective goggles. As the policeman walks away with the glasses, the protester follows him in his wheelchair, only to be pepper-sprayed by the officer at an extremely close range. The protester is seen covering his burning eyes before the video cuts off.

The video's caption, translated from French into English, reads, "Even the disabled are not spared. This astounding scene shot in Toulouse is not a use of justified force. ‘I have never seen any police officer attack a protester' are words from Mr. Castaner's mouth," the caption adds, referring to Christophe Castaner, who has been serving as France's minister of the interior since October 2018 and as the executive officer of social-liberal political party La République En Marche! since 2017. The party was founded by French President Emmanuel Macron in April 2016.

"There is no legitimacy behind this gesture, this policeman who has no dignity or a touch of honor and who allows himself to gas a person in a wheelchair for no reason must be punished," the caption adds.

The incident took place on the 16th consecutive weekend of the "Gilets Jaunes" or "Yellow Vests" protests, which were first triggered in mid-November 2018 over Macron's proposal to raise fuel taxes. Around 5,600 protesters took part in the demonstrations last week, which is a significant drop from the 300,000 that first took to the streets when protests began last year, according to multiple reports.

Although Macron eventually discarded his fuel tax plan, protesters — dissatisfied with the French government's social policies — have continued to rally across France. The protesters are currently calling for increases to salaries, pensions, social security payments and the minimum wage, with some even calling for Macron's resignation.

The rallies have been marked by violent clashes between protesters and the police, with French police using water cannons, tear gas and low-lethality projectiles such as "Flash-Balls" against protesters. Since November, around 3,000 people, 2,000 of whom are civilians, have been injured as a result of the protests, Sputnik previously reported. At least 11 people have died since the movement began, the Independent recently reported.