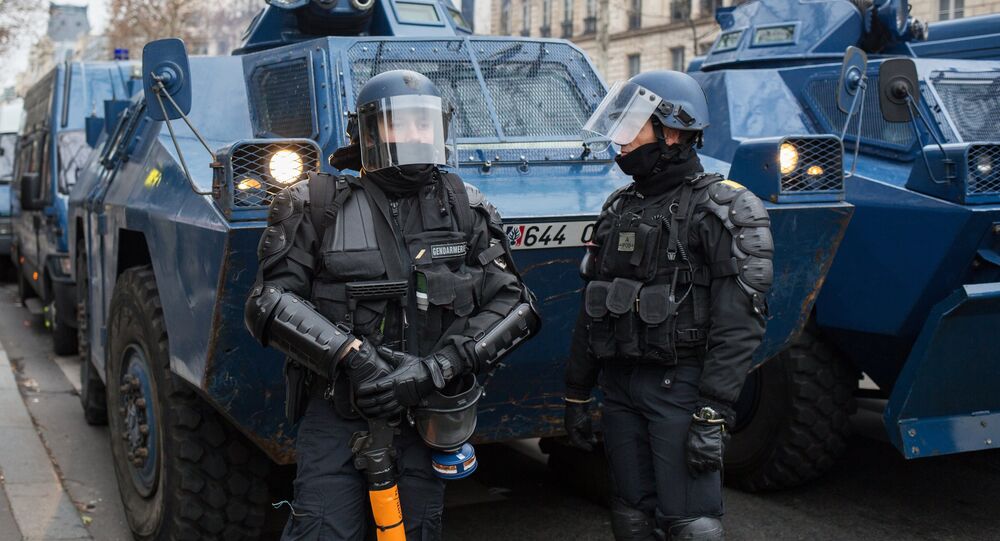 While the Gilet Jaunes demonstrations against austerity and government neglect of the poor began in November of last year, the roots of their anger - and of the increasingly clueless police response - go back years, to the presidency of Nicolas Sarkozy, an investigative journalist told Sputnik.

Radio Sputnik's Fault Lines spoke Thursday with investigative journalist Vanessa Beeley, who lives in France and told the show about developments in the Gilets Jaunes, or Yellow Vests, movement.

© REUTERS / Benoit Tessier
‘Yellow Vest’ Protesters Aren’t May 1968 Students, They’re Sans-Culottes
"This movement has been gathering momentum for some time," Beeley told Sputnik. "Not only during President [Emmanuel] Macron's time in government but even prior to that, back in 2013, 2014, there were reports submitted to the Assembly Nationale stating the fact that the unrest and the dissent among the people of France — and you know, that's probably 60 percent of the population that is living in the suburbs of most of the major cities in France — who are suffering under successive austerity measures, reductions in the health service, cutbacks in public services and education etc, probably since Sarkozy's government, going from 2008 until now."

"The Gilets Jaunes is an organic movement; it's a movement from across a wide section of French society — of course, the government and the government-aligned media in France are trying to portray them as right-wing, as nationalists. They're trying to discredit and dehumanize them with some very familiar tactics."

"But these are completely false," Beeley said. "They are an apolitical organization; they purposefully have not elected any leaders; they're not following the line of identity politics; they have a very horizontal structure of.. electing spokespeople. And those spokespeople are not practiced public speakers. They are people, as I said, from all walks of life: from students, from health care, from education, from the unemployed, from the blue-collar workers to the middle class, all of whom are rejecting Macron's attempts to basically empower the ruling elite in France, turn France [from] a republic effectively into a plutocracy," the journalist noted.

"This is the pushback from the people against those efforts by Macron."

Beeley noted that Macron, a former investment banker and finance inspector, held only one government position prior to becoming president: that of Minister of Economy and Finance, which he held from 2014 to 2016.

"Macron was effectively elected… by the wealthy and privileged elite of France, and of course, the aligned media," Beeley said.

Noting that the police have increased their efforts at violent repression of the movement, Beeley said that Alexandre Langlois, general secretary of the police union, has become a whistleblower of sorts, "giving interviews across a number of media channels in France, and is receiving a fair amount of criticism from the government and state-aligned media as a result."

"What effectively is happening here is state-sanctioned mutilation of unarmed protesters. What the state is trying to do, of course, is to portray the Gilets Jaunes, or the Yellow Vests, as the instigators of the violence, while in reality the majority of the violence is being carried out by agents provocateurs and the ‘black bloc,' or as they call them, ‘casseurs,' which are the ‘breakers' or the looters. Now those, even the interior minister, Christophe Castaner, himself has admitted that there are less than — between 150 to 300 of the black bloc, or that type of protester, across France. So, a very, very small minority."

She further noted that "the antifa movement," which is often associated with black bloc formations of protesters who wear nondescript black clothing, has also attacked the Gilets Jaunes movement.

"In France, I would suggest, and it has been suggested by a number of Gilets Jaunes spokespeople, that the black bloc movements are actually agents provocateurs," she said, noting "that idea is reinforced by the testimony from Alexandre Langlois."

"The point that he has made is that since Macron came to power in France, the number of suicides among the national police force in France have increased. I think 75 since 2018 have committed suicide, which is a huge number," the journalist told hosts Garland Nixon and Lee Stranahan.

"Secondly, he is saying that the police on the ground are being controlled and directed by remote control centers, and in those control centers he claims there are hierarchy figures who are connected to the state. So, basically they are directing the police on the ground, and in his view they have created situations where confrontation is almost impossible to avoid. When we also combine that with, for example, the fact that there was a police laboratory document released quite recently which showed recommendations to the police for to cease their use of the GLI-F4 grenades that contain 25 grams of TNT. They can also 10-gram rubber pellets, so if those are thrown into a crowd, those are the grenades that are mutilating, that are taking off hands, for example. There are now, I think, around eight people, maybe more, who have lost hands in these demonstrations — 157 head wounds, by the way, some of those [including] loss of eyes; one 30-year-old fireman is still in a coma."

"But going back to this police research document, which clearly recommended that the GLI-F4 should not be used in crowd control under any circumstances. The interior minister, Christophe Castaner, while he accepted the findings of the report, he said that ‘we will continue to use the GLI-F4 grenades until we exhaust our stocks,' without specifying [the volume of] the stocks," Beeley told Sputnik.

"So he is deliberately forcing the police to use weapons that he knows can mutilate, can kill, and certainly will increase the confrontation between the police and the Gilets Jaunes."