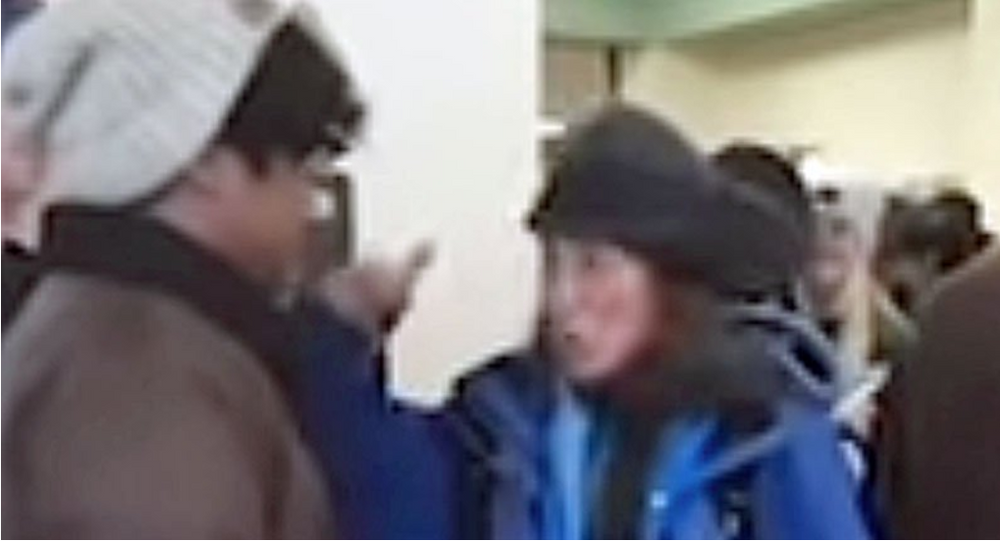 ‘Go Back Where You Came From’: US Woman Arrested for Accosting Voter (VIDEO)

A woman was arrested Tuesday at the Gallatin County Courthouse in Bozeman, Montana, after she launched a racist volley against a man waiting in line to vote on midterm election day.

Brian Mango, 22, was waiting in line to vote when 53-year-old Wendy Bies, who appeared drunk, started yelling racist remarks at him as she weaved in and out of line.

​"Go back where you came from," Bies tells the young man in a video, which was taken by eyewitness Tennison Big Day. Bies can also be heard saying that Mango's "people" came to the US "on purpose," and that all they wanted was "free stuff."

Mango, unable to listen in silence anymore, asked her, "Do you know why mom is here? Because Americans bombed her country," referencing his mother, who is a refugee from Laos.

"Do you know why my dad's here? Because they brought his ancestors here in chains," he added.

"She kept making these odd remarks about people being here just asking for free handouts. This was ironic to me in the sense that the entire time, she was taking the free food provided by the city in that very moment," Mango told Sputnik Wednesday.

"As all of this came to a bit of a tipping point, with her continuously touching me and yelling, I just kind of snapped and couldn't take what she was saying anymore. Part of me is regretful that I did; I just wanted to finish voting and go back to work. As a student, I'm pretty short on funds, so going to work was a huge priority at the time," he added.

According to Gallatin County's jail roster, Bies was booked into jail on Tuesday afternoon for obstructing a police officer and for disorderly conduct after she continued causing disruption and is being held on a $335 bond. She was arrested by a county sheriff present in the courthouse after some "friendly and helpful bystanders grabbed his attention," Mango noted.

"My intent was never to have the law or the media involved," Mango told Sputnik Wednesday.

"She was drunk and disorderly. I just wanted to stand up for myself and the people around me," he added.

However, according to Mango, who has been living in Bozeman since he was in the fifth grade, these types of incidents are not "foreign" to him.

"Here in Bozeman, even I still get shouted at from cars and glared at as I walk past a group of people I don't even know. I get asked if I am shoplifting and [get] all sorts of comments. Sadly, I leave my apartment every day expecting something like this to happen, and this isn't an experience unique to just myself either. Many here in Bozeman, I am sure, feel the same way," he noted.

"Bozeman has this kind of idea that here in the city, it's all good. We have progressed beyond this kind of thing; transcended, if you will. But the sad truth is that people have just been blind to it. The only reason my experience matters is because someone caught it on video and the volume of bystanders was pretty high," he added.

Mango also told Sputnik that he regrets not getting the names of the bystanders who stood up for him and grabbed the county sheriff's attention.

"Sadly and regretfully, I didn't get their names except for the person who took the video — his name is Tennison Big Day," Mango said.

"He took the video because he understands what it's like to be a minority in this area. If not for him, people would not have been able to see what happened and wouldn't have been exposed to what really exists here. It seems that the Bozeman community is pretty shook up about what they saw, and you know what? Maybe that's for the better."