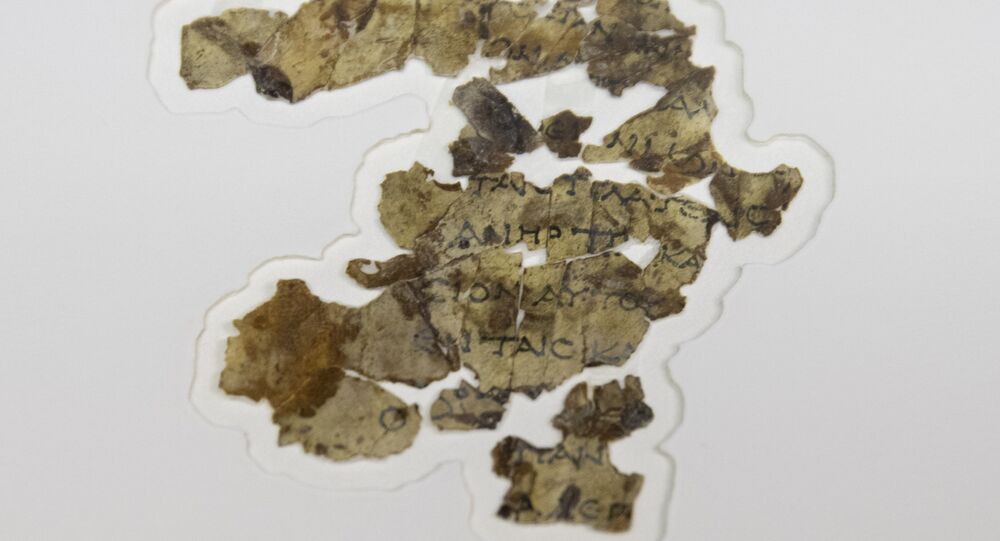 The ancient find is highly fragmented, like many others that have been unearthed to date, and like all the rest contain striking evidence from the era, when Christianity and Judaism began to take on their current shape.

At least two dozen fragments of a new, predominantly Greek-language Dead Sea Scroll have been discovered. The find came during extensive excavation work in the Judean Desert, the Israel Antiquities Authority announced Tuesday, as cited by The Times of Israel, adding it is the first roughly 2,000-year-old scroll to have been discovered in some 60 years.

The scriptures appear to be Greek translations of the books of Zechariah and Nahum from the Book of the Twelve Minor Prophets, and are written in two scribal hands, with only the name of God penned in Hebrew in the body of the texts, which was typical of the First Temple period.

Among the newly undug fragments is a pacifist, bonhomie-proclaiming sentence from the book of Zechariah:

"These are the things you are to do: Speak the truth to one another, render true and perfect justice in your gates. And do not contrive evil against one another, and do not love perjury, because all those are things that I hate – declares the Lord".

The unique artefacts were found in the so-called "Cave of Horror" in Nahal Hever, which lies some 80 metres (260 feet) down from the top of a steep cliff. An Israel Antiquities Authority press release has it that the cave bears the nickname because it is dotted "by gorges and can only be reached by rappelling precariously down the sheer cliff".

The said excavation yielded another, no less breathtaking discovery - arguably the world's oldest surviving basket, a presumed 10,500-year-old woven storage item, based on radiocarbon dating tests by Professor Elisabetta Boaretto of the Weizmann Institute of Science in Rehovot. The basket, which, as per the IAA, was found by teenagers from the Nofei Prat pre-military academy, is understood to have stayed almost intact thanks to the outstanding heat and aridity typical of the area.

During the in-depth survey, the archeologists also stumbled upon the naturally mummified remains of a child, most likely a girl, wrapped in a cloth. The body, with hair preserved, was dated to around 6,000 years ago, predating the hallmark scrolls by roughly four millennia.

Separately, the team engaged in the excavation, found a cache of coins from the days of the notorious, ultimately futile Bar Kochba revolt against the Romans and their rule in 133-135 A.D. The coins feature Jewish symbols typical of the epoch, namely a harp and a date palm.

Of all the hundreds of scrolls found to date only three are more or less complete, while the rest are all fragmented, consisting of around 25,000 tiny, relatively preserved parts, scholars say. Some are in Hebrew, some Aramaic, and others in Greek - a fact that essentially adds to the credibility of the theory that authorship of the landmark texts is not unified.

Vast painstaking efforts are being made to try to reconstruct the texts from the fragments using top-notch modern-day technologies. In particular, the IAA stated that about 80 kilometres of Judean Desert caves have been meticulously combed through, including by means of drones that are specially flown to places that are hard to access.

Ever since a Bedouin shepherd accidentally spotted the first Dead Sea Scrolls in 1947, these ancient texts have added enormously to our current knowledge of Second Temple Judaism and the plethora of religious groups and sects from which rabbinical Judaism and Christianity eventually emerged and learned to live side by side.