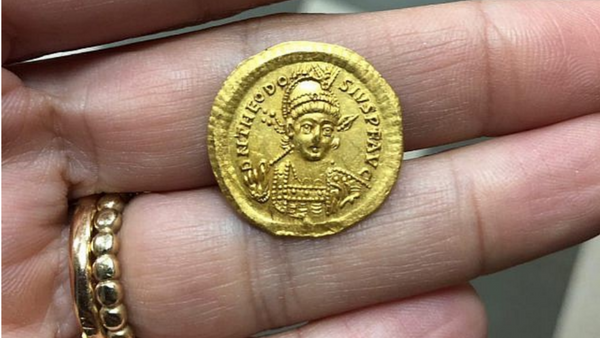 A rare 1,600-year-old coin featuring the effigy of Byzantine emperor Theodosius II was recently discovered by four teens in the the mountainous region of Galilee in northern Israel.

According to an Israel Antiquities Authority press release published Tuesday, the coin was stumbled upon by four ninth-graders, Ido Kadosh, Ofir Sigal, Dotan Miller and Harel Grin, while they were trekking by the Zippori stream in Galilee, adjacent to the Sanhedrin trail, back in February. The 70-kilometer-long Sanhedrin trail passes through Galilee from Beit She'arim National Park to Tiberias on the western shore of the Sea of Galilee, as well as through a temple compound where Torah scholars held court in ancient times.

​The students showed the coin to their geography and history teacher Zohar Porshyan, who then contacted the Israel Antiquities Authority.

"The gold coin is a solidus minted by the emperor Theodosius II in Constantinople (now Istanbul) around 420 to 423 CE. Similar coins are known from the Eastern Byzantine empire, but this is the first of its type discovered in Israel. One side depicts the image of the emperor and the other shows the image of the Goddess Victory holding the Staff of the Cross," Israel Antiquities Authority numismatic expert Dr. Gabriela Bijovsky said after evaluating the coin.

During his reign, Theodosius II established a compilation of laws of the Roman Empire in what was called the "Codex Theodosianus" in 438. In addition, he abolished the head of the Sanhedrin Council, an ancient Jewish court, because he promoted Eastern Orthodox Christianity as the official religion of his empire. As a result, Jewish people were not allowed to partake in military or civil services, and no synagogues were allowed to be consecrated.

"The emperor Theodosius II abolished the post of the ‘Nasi', the head of the Sanhedrin Council, and decreed that the Jews' financial contributions to the Sanhedrin be transferred to the Imperial Treasury," Israel Antiquities Authority archaeologist Yair Amitzur said.

"It is symbolic that the gold coin discovered adjacent to the Sanhedrin trail reflects the period of dramatic events when the Sanhedrin ceased to function in the Galilee, and the center of Jewish life transferred from the Galilee to Babylon," he continued.

The ninth-graders were awarded a certificate of commendation from the Israel Antiquities Authority for discovering the coin.