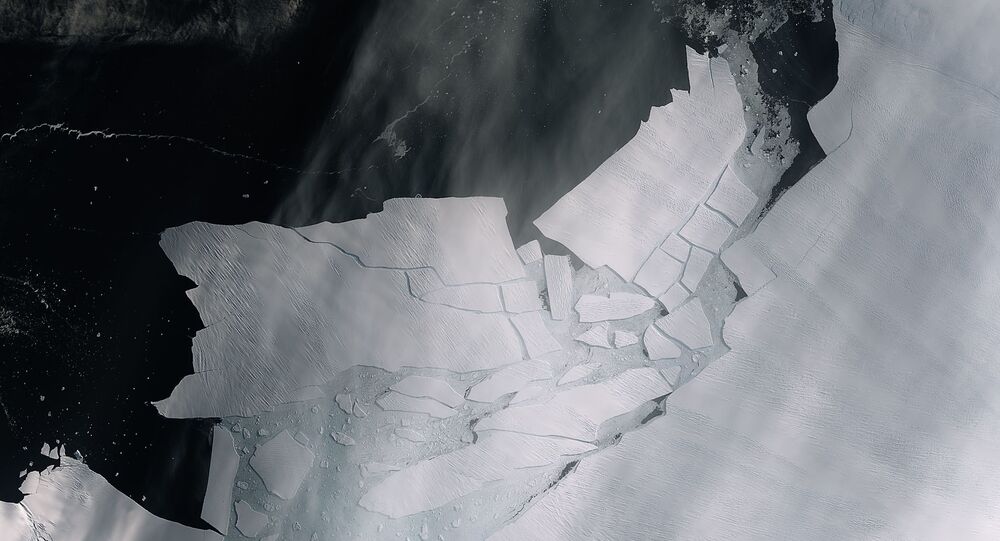 While West Antarctica’s Pine Island Glacier (PIG) has been losing ice for the past quarter of a century, the pace of glacial retreat has increased dramatically in recent years - as seen in new footage from the European Space Agency (ESA).

The ESA revealed Tuesday that one of its satellites had captured a significant event of calving - the process in which a glacier sheds huge blocks of ice.

Video released from the ESA shows a time lapse of 57 radar images taken by the Sentinel-1 satellite, which belongs to Copernicus, a joint EU-ESA program designed to provide high quality monitoring of Earth. Images seen in the footage date from February 2019 to February 2020 - with the last frame showing the glacier on February 10.

The PIG, over 300 square kilometers in size, is seen developing cracks that continue to grow until several “piglet” pieces break off the glacier. The largest “piglet” has been labeled “B-49” by the ESA, signifying the mass’s importance in terms of future monitoring for researchers.

With iceberg B-49 the Pine Island ice shelf has again become smaller than we have observed in recent history. pic.twitter.com/d9NNl6xkib

In October 2019, Sentinel-1 and Sentinel-2 satellites were used to identify two large rifts in the PIG that had drastically increased in length within a matter of months.

The ESA estimates that the ice front, which has an average thickness of 500 meters, will continue to see an increase in the rate at which it discharges blocks of ice into the ocean.

“The Copernicus twin Sentinel-1 all-weather satellites have established a porthole through which the public can watch events like this unfold in remote regions around the world,” Mark Drinkwater, senior scientist and cryosphere specialist at the ESA, noted in the release.

“What is unsettling is that the daily data stream reveals the dramatic pace at which climate is redefining the face of Antarctica.”

We just approached within a couple of miles of the new giant #PineIslandGlacier iceberg B-49 (the white wall behind smaller icebergs and brash ice in the foreground) on @GlacierThwaites @GlacierOffshore cruise #NBP2002 aboard RV Nathaniel B Palmer. pic.twitter.com/xzvoghrz7Z

The melting of the PIG and neighboring Thwaites Glacier - which both connect the center of the West Antarctic Ice Sheet to the ocean - is significant because, collectively, it could cause the global sea level to rise by 1.2 meters (4 feet), according to NASA’s Earth Observatory.

The Thwaites Glacier, also labeled the “doomsday glacier” by scientists, has recently received increased attention as researchers have reported that it is melting at a rate faster than previously expected.

“The Thwaites glacier is 120 kilometers wide, and this giant glacier [is] responding to warmer waters. The [glacier is] … putting more ice into the ocean and rising sea levels,” Professor Eric Rignot told Radio Sputnik’s Loud and Clear on January 31. “We are very concerned that processes of mass loss will accelerate with time.”