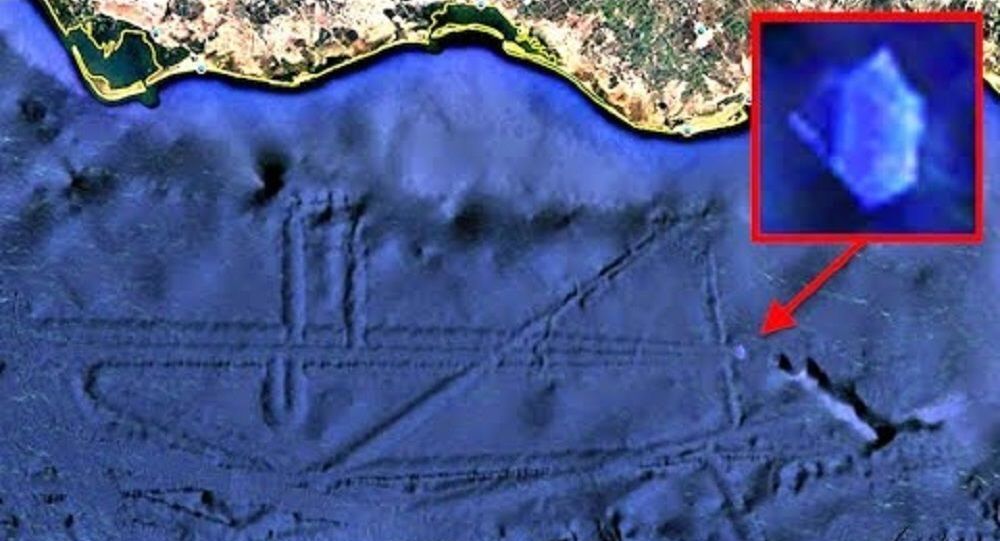 Pondering the nature of an enigmatic object he spotted at the “alien base”, the UFO-hunter mused that it might be related to the source of power of the mythical lost kingdom of Atlantis.

“I found this awesome crystal blue UFO at an underwater alien base off the coast of Mexico today. The UFO according to Google ruler is 1.8 miles across in both directions. Thats a big alien craft!” Waring wrote on his blog, musing that the craft should probably be designated as an unidentified submerged object (USO) instead.

He also took note of the areas he believes to be “runways”, speculating that they're located in “an area safe of fish, sharks, whales so the USOs travel more safely».

The conspiracy theorist also claimed that Plato's tale of Atlantis mentions a gigantic blue crystal which lengthened the lives of the mythical kingdom's residents and powered their technology, and wondered if the “crystal” on the picture might be related to that myth.

“Whatever that blue object is...if retrieved...the country that gets it will be and stay a world power”, he surmised.

While Waring also previously made a number of claims related to various peculiar objects he allegedly found in NASA photos, such as alien tech on asteroid Bennu or an alien base on the surface of the Moon, the US space agency attributed at least one of his discoveries to the effect of pareidolia – a psychological phenomenon where people see recognisable shapes in clouds, rock formations, or otherwise unrelated objects or data.