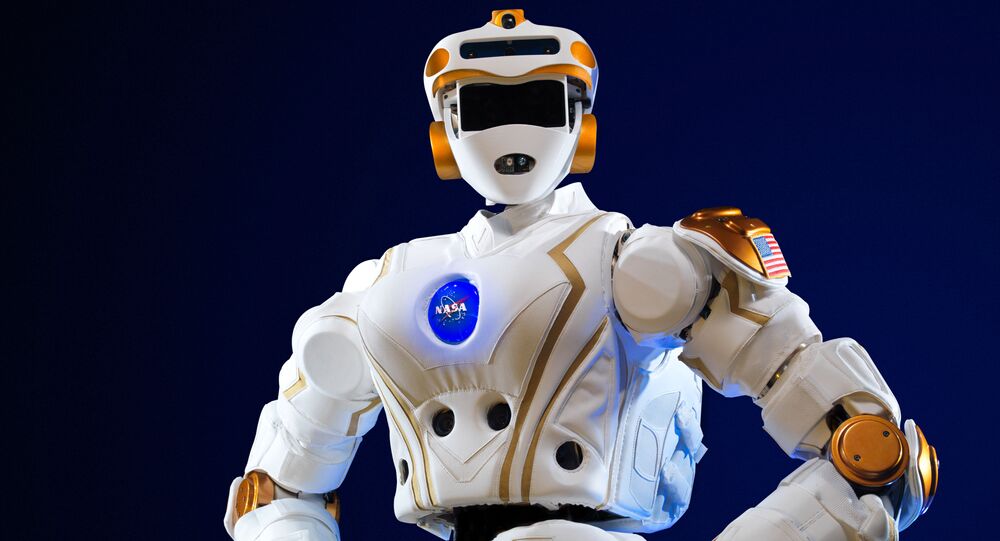 Scientists from the University of Edinburgh have unveiled a US$2 million humanoid robot that will help NASA on their unmanned missions to Mars.

The project is a collaboration between US space agency NASA and the University of Edinburgh, Scotland.

The robot, named Valkyrie, is one of the most advanced humanoid robots in the world. There are only three others in existence, one in Edinburgh and two in the US.

Sethu Vijayakumar, professor of robotics at the University of Edinburgh's School of Informatics, told Sputnik about the project and what he hopes will be a significant leap for Mars exploration.

"The whole plan with NASA's timeline of making us a two planetary species, in other words sending humans ultimately to look for possibilities of inhabiting another planet, is a very big challenge. It's a challenge because unlike missions to Mars or the International Space Station (ISS) which we are all very familiar with, this is a much larger distance and we have to manage resources," Professor Vijayakumar said.

"What it means is that to be able to deploy something on Mars, we need to do two things: one, we need to create technologies like the rocket, the spacecrafts, and the spacesuits, so things that humans can wear and sustain themselves to deal with radiation, deal with long-term space travel. More importantly you have to have the ability to not transport everything. Transporting stuff from Earth to Mars is going to be prohibitively expensive. So we need to build capabilities on the surface of Mars to be able to, for example, manufacture and repair things, and maintain capabilities while we are trying set up a base there. That is where the robots come in, that's where Valkyrie comes in," Professor Vijayakumar told Sputnik.

So what exactly will the humanoid be able to do and how will help in NASA's mission to MARS?

Professor Vijayakumar said that this humanoid is one of the most advanced robots in the world, which means it has high fidelity, it's repeatable and from a competence point of view it has a high spec.

© Sputnik / Johanna Ross
Sethu Vijayakumar, professor of robotics at the University of Edinburgh's School of Informatics (L), at Sputnik studio in Edinburgh.

As of now the humanoid Valkyrie is the most advanced humanoid platform in the world, according to the professor, and from a competence point of view it's extremely high spec.

However, the professor says just building a machine — which is "motors, iron and steel" — is not enough for a robot to be able to perform smart tasks.

"There has to be some level of AI, some level of intelligence built into the system and the raw sensing data that you get from the sensors onboard has to be processed, we have to use algorithms which the robot can use to do things like balancing, manipulating, and that's what we are currently working on.

"The robot at the moment can repeat things that you teach it to do. We can with very fidelity move the individual joints. What we are currently in the process of doing is to build up — scaffold — the capabilities of the robot by for example, teaching it to create algorithms, recognize objects using its multiple sensors, figuring out what can be manipulated, how it can walk up to that object without falling over, make multiple contacts with the surface in order to maintain balance and then do some dexterous manipulation," Professor Vijayakumar told Sputnik.

"It's really hard, as humans we do things very naturally, we can hold onto one surface and use that surface as a way of mitigating balance issues. For robots to do that, the moment you make contact and anything that involves force, the computation just blows up, and it's a big challenge just to be able to not avoid contact, but exploit it to do much more complex thing," Professor Vijayakumar added.

The collaboration between NASA and Edinburgh University was a natural progression.

The university has a long history in robotics and is considered, according to some, to be the birthplace of AI.

Professor Vijayakumar and his team hope that the humanoid will be able to inspect and measure certain areas on Mars, which will provide greater insight. However, scientists also hope that the technology used to build this robot will play a central role in the development of robust technology in autonomous driving, as well as the prosthetics industry.

In comparison to NASA's Curiosity Rover Valkyrie is quite different. Curiosity is a piece of well-tested hardware on wheels, meaning it can operate once commands are sent, but if it is not commanded, it will stay put.

"A humanoid robot is very different, you have to send commands to it at about 1000 hertz, which means it has to receive 1000 signals every second for it to be able to maintain balance and do what it is supposed to do. So that puts an extreme real time constraint on all the work that what we are doing," Professor Vijayakumar told Sputnik.

Professor Vijayakumar added that one of the charms of humanoid robot is its ability to adapt to a terrain, as they are more dexterous and versatile, although the control aspect is much more complex as we wouldn't be able to do control it in the same we do Curiosity — from Earth, which means Valkyrie would have to be fully autonomous.