British businesses are under attack. Research has shown that more companies in the UK have been hacked by cybercriminals in the past year than in 2015, and many of these firms have little or no security in place to stop it.

According to the survey of 1,200 businesses by the British Chambers of Commerce (BCC), who carried out the research, one in five British businesses have fallen victim to cybercrime and the bigger the company the more susceptible they are to online attacks.

BCC survey released today shows one in five businesses have fallen victim to cyber-attacks in the last year https://t.co/pj9dX8Putg

Larger companies, which are defined by those with at least 100 staff, are more prone to cyberattacks.

The BCC report found that 42 percent of big businesses had fallen victim to online crime compared with 18 percent of smaller companies.

Only a quarter of businesses have cyber security accreditations in place https://t.co/rGVdVTFbH6 pic.twitter.com/p3sAJMUqm8

In addition to this, only 24 percent of respondents said that their business had security measures in place to guard against hacking.

"While firms of all sizes, from major corporations to one-man operations, fall prey to attacks, our evidence shows that large companies are more likely to experience them. Firms need to be proactive about protecting themselves from cyber attacks," BCC Director General Adam Marshall said in a recent interview.

Mr. Marshall said that businesses should also be mindful of the extension to data protection regulation coming into force next year, which will increase their responsibilities and requirements to protect personal data. Firms that don't adopt the appropriate protections leave themselves open to tough penalties.

Most businesses in the UK are relying on IT support providers to report as well as resolve cyber attacks, the report from the BCC states.

Campaigners have said that the UK government must start providing better guidance for businesses and also set out a clear path in the event of a cyber security breach. This will help increase clarity around the response options which are available to victim.

Web giant Yahoo, telecoms firm TalkTalk and controversial dating website Ashley Madison are among the high-profile businesses to have been subject to cyberattacks in recent years.

© REUTERS / Chris Wattie
The homepage of the Ashley Madison website is displayed on an iPad, in this photo illustration taken in Ottawa, Canada July 21, 2015

The threat of a cyberattack doesn't seem to worry most Brits however, who believe they will face more risk of being burgled then a victim of cyber crime. According to a report by

British Telecom (BT), the majority of people in the UK are not taking seriously the threat of a cyberattack and think they are more likely to be a victim of a physical break-in than a cybercrime, despite figures suggesting the two are just as likely.

Sixty percent of people believe that they are more likely to be burgled than become a victim of a online crime, according to cybercrime figures presented by BT.

Campaigners are calling on the UK government to put more in place to help businesses combat the terrors of cyberattacks.

A government spokesman said that they will be investing US$1.9 billion to make the UK the safest place to live, as well as do business online.

"It's essential businesses take responsibility for their cyber security risks and we urge them to take advantage of our free advice, online training and Cyber Essentials scheme to protect against attacks" a spokesperson for the government said in a recent interview. 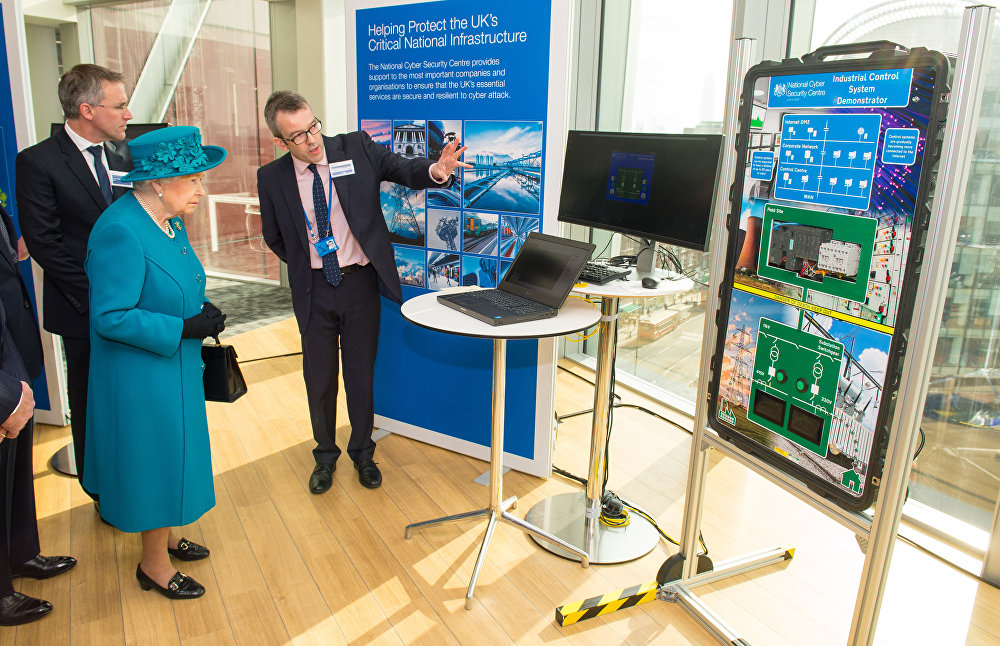 © AFP 2019 / Dominic Lipinski
Britain's Queen Elizabeth II (2L) listens as Director of Engagement and Advice Alex Dewdney (R) explains how an electricity supply could be subjected to cyberattack, as she attends the opening of the National Cyber Security Centre in London on February 14, 2017.

The government also hopes that the recent opening of the National Cyber Security Center will hopefully add protection for UK businesses.