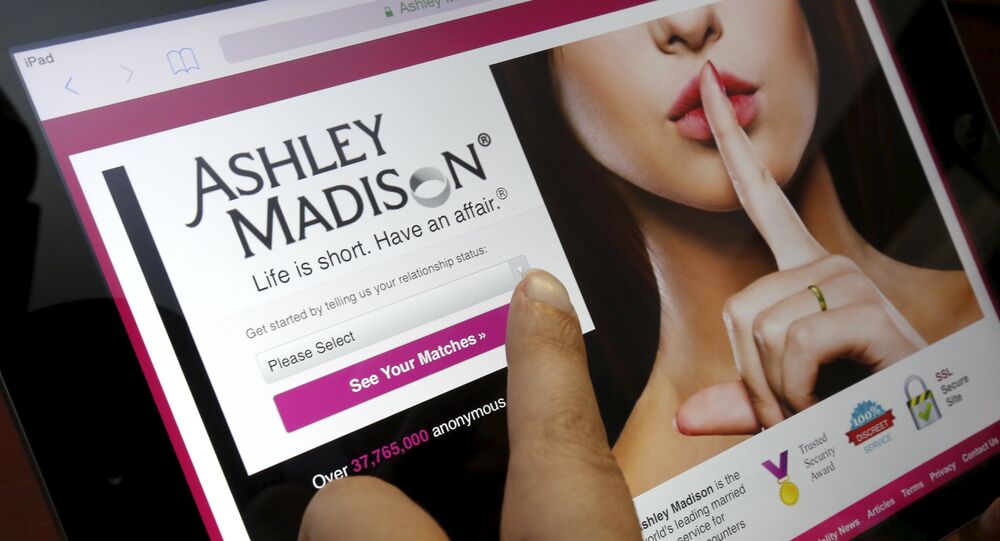 Hackers of Ashley Madison, a website for people seeking extramarital affairs, have dumped almost 10 gb of personal information belonging to some 37 million site members, including the email addresses of government officials and employees.

© Flickr / Pablo Daniel Zamora
Hackers Appear to Have Dumped Ashley Madison User Info on the Dark Web
More than 15,000 email accounts with.gov or.mil address were dumped online by hackers of the website Ashley Madison on Tuesday, along with the personal information of some 37 million users including their names, addresses and telephone numbers.
© AFP 2021 / STR
Tesla Releases Urgent Security Patch After Model S System Hack
According to lists of email addresses posted to Pastebin.com, 13,078 used the domain.mil, and 2,223 had the US domain.gov, used for government employees. The domain address.gov was also used by members from more than 40 other countries, including some 1,500 in Brazil and 800 in Australia.

Users of Ashley Madison are not required to verify an email address after registration, so it is possible that email addresses were used to sign up for the website by people other than their owners.

Bill Clinton and Tony Blair are on the Ashley Madison list… pic.twitter.com/wsqh223lSt

In the aftermath of the hack, private investigation website Trustify is offering users the option to check if their email, or the email of their spouse, is included in the leak. Trustify also revealed the kind of user data leaked by the hackers, which includes the users' full name and address, sexual preferences, and their account type.

Infographic: What Kind of Data Was Leaked From Ashley Madison http://t.co/481WFDcPrg pic.twitter.com/nIiUzl6W8D

The data was dumped onto a dark web address, accessible only through the Tor browser, by the hacking collective 'Impact Team,' who justified the data dump as a punishment of the "fraud, deceit, and stupidity of ALM and their members."

"Avid Life Media has failed to take down Ashley Madison and Established Men."

"Now everybody gets to see their data."

The Ashley Madison website, whose slogan is, "Life is short. Have an affair," bills itself as "the most famous name in infidelity and married dating," and claims to have "thousands of cheating wives and cheating husbands sign up every day looking for an affair."

That claim is disputed by Impact Team, who called the site "a scam with thousands of fake female profiles. See ashley madison fake profile lawsuit; 90-95% of actual users are male. Chances are your man signed up on the world’s biggest affair site, but never had one. He just tried to. If that distinction matters."

"This event is not an act of hacktivism, it is an act of criminality," stated Avid Life Media, which owns Ashley Madison, in response to the hack.

"It is an illegal action against the individual members of AshleyMadison.com, as well as any freethinking people who choose to engage in fully lawful online activities."

"The criminal, or criminals, involved in this act have appointed themselves as the moral judge, juror, and executioner, seeing fit to impose a personal notion of virtue on all of society," complained the Toronto-based company, which is conducting an investigation into the cyberattack in cooperation with Canadian and US law enforcement.