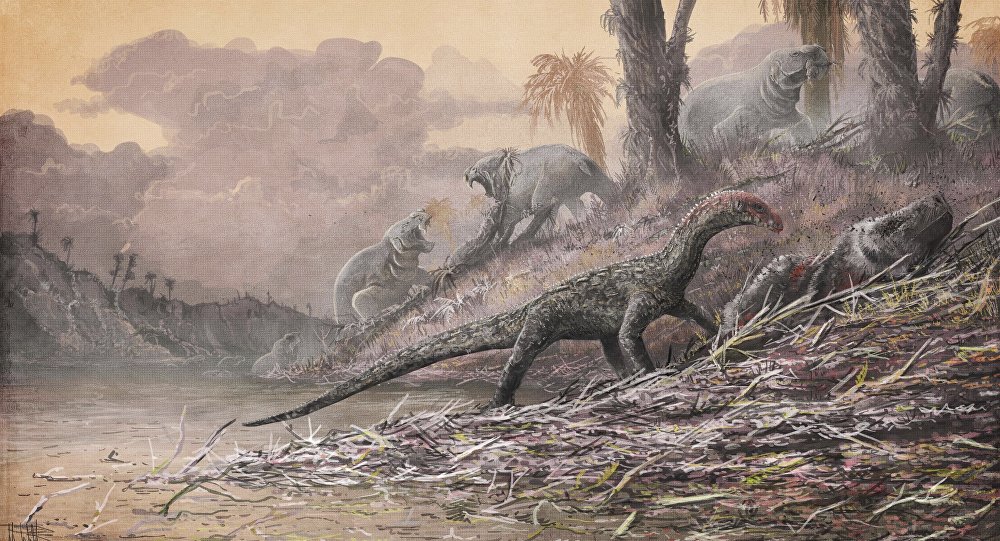 It’s like a crocodile, but it’s got a long neck, it’s about the size of a labrador retriever and it died out 250 million years ago. But the completion of a skeleton of the long-extinct Teleocrater Rhadinus is a pivotal moment in understanding the evolution of dinosaurs on this planet, says an international team of paleontologists.

Most people know that the first creatures to live on land were amphibians that climbed out of the sea, and they know these creatures eventually gave way to the dinosaurs that we know and love. But the intermediary between these creatures, the archosaurs, are not as well understood.

Archosaurs are the common ancestors of birds and crocodiles. Dinosaurs evolved from the birds, but Teleocrater looked nothing like the early dinosaurs we know of. It looked a lot more like a crocodile, actually.

Sterling Nesbitt, an assistant professor of geosciences at Virginia Tech and one of the study's authors, called the "discovery of such an important new species" a "once-in-a-lifetime experience."

Teleocrater has unexpectedly crocodile-like features that are causing us to completely reassess what we thought about the earliest stages of dinosaur evolution," said Ken Angielczyk, associate curator of fossil mammals at the Field Museum of Natural History in Chicago and study contributor.

"Surprisingly, early dinosaur relatives were pretty profoundly not dinosaur-like… scientists generally don't love the term 'missing link' but that's kind of what Teleocrater is: a missing link between dinosaurs and the common ancestor they share with crocodiles."

The first Teleocrater fossils were discovered in Tanzania in the 1930s and first studied by the famed English palaeontologist Alan Charig in the 50s. But it wasn't until 2015 that additional digs in Tanzania allowed for complete reconstruction of a Teleocrater skeleton.

© AP Photo / Martin Meissner
Humanity’s Earliest Ancestor: A Blob with a Giant Mouth and No Anus

Previously, the first known members of the bird branch of archosaurs was Lagerpeton, a two-legged hopper about the same size as a chicken. It and similar species suggested to archaeologists that all dinosaurs arose from such a beast, but the new research of Teleocrater begs to differ. Nesbitt's team claim that their finds suggest that Lagerpeton and its ilk were a specialized offshoot of the early dinosaurs, rather than the norm.

Teleocraters lived in the connecting period between the Permian and Triassic Periods, when dinosaurs first arose. By the time most of the dinosaurs in the popular conscience began to appear in the mid-Triassic, Teleocrater had gone extinct.

"The finding forces a rethink of early dinosaur evolution," the researchers wrote in the paper, which was published in the journal Nature on Wednesday.

Weird Creatures Inhabited Our Planet Billions of Years Before Dinosaurs