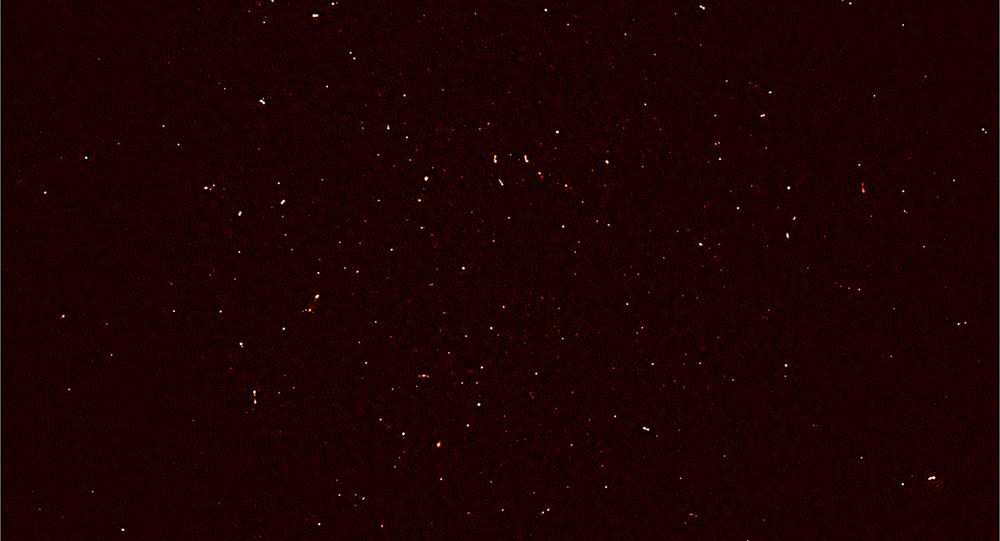 MeerKAT, a new South African radio telescope, has produced its first image, depicting 1300 galaxies in an area of space where only 70 were previously known to reside.

© REUTERS / China Daily
China Completes World’s Biggest Radio Telescope in Search of Alien Life
The First Light Image, released by the Minister of Science and Technology for South Africa, Naledi Pandor, provides a fascinating insight into the capabilities of the MeerKAT radio telescope, currently approaching completion in Karoo. The image covers some 0.01 percent of the entire celestial sphere, and reveals some 1300 galaxies in an area thought previously to only contain 70.

​The image was made using just 16 operational dishes of the 64 total MeerKAT telescope dishes, each 13.5 meters in diameter. Eventually, MeerKAT's 64 dishes will make it the largest and most-sensitive radio telescope in the southern hemisphere until, that is, a much larger project, called the Square Kilometer Array (SKA), is put into operation.

According to Professor Justin Jonas, SKA South Africa chief technologist, "based on the results being shown today, we are confident that after all 64 dishes are in place, MeerKAT will be the world's leading telescope of its kind, until the advent of SKA."

The South African MeerKAT radio telescope is being commissioned in sections, so that technical problems can be solved at the early stages. While construction will continue into late 2017, the telescope is currently fit for scientific study, as evidenced by the released imagery.

MeerKAT will become the first part of SKA, the world's largest radio telescope, providing 50 times the sensitivity of any existing terrestrial-based celestial observation device. Its total surface will be roughly equal to one square kilometer, hence the name. The SKA will require a communication network totaling more bandwidth than all of today's internet traffic combined.

The joint project of 12 countries, SKA will be built in two phases, SKA1 and SKA2, beginning in 2018. SKA1 will consist of two major parts — SKA1 MID, to be built in South Africa, and SKA1 LOW, to be built in Australia. These two facilities will observe the universe at different radio frequencies. A smaller section of SKA1 will be constructed in New Zealand to provide for better observation of the Milky Way.