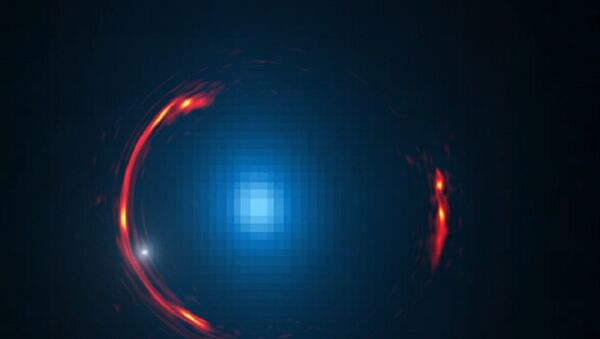 An image captured by a large radio telescope has revealed an anomalous distortion that turns out to be an extremely distant dark-energy galaxy.

An image made by Atacama Large Millimeter/submillimeter Array (ALMA), located in the Chilean high desert, shows a distant galaxy visible as a single bright dot, surrounded by a distorted halo. This halo, known as an Einstein Ring, is a far more distant galaxy, dubbed SDP.81, that lies behind the the galaxy represented as the bright dot. As light from a more distant source, such as a galaxy, passes by a supermassive object, such as a black hole or another galaxy, it becomes distorted, and appears to bend around the closer object, forming a ring. This distortion, predicted in Albert Einstein's general theory of relativity, allows astronomers to use galaxies as natural magnifying glasses, to acquire images of very distant objects behind them.

This particular image, however, shows a strange distortion near the edge of the halo. Visible as a smaller white dot, it is presumed to be a dwarf galaxy consisting mostly of dark matter, and, as such, could not otherwise be seen from Earth. Its mass is estimated at less than one-thousandth the mass of our galaxy, the Milky Way. This location of the smaller dot, and its estimated mass, combined with the fact that no other object has been spotted in the region, suggests that the cluster could be an extremely faint dwarf galaxy, comprised of dark matter, lying nearly 4 billion light years from Earth.

Science & Tech
Is CERN About to Revolutionize World of Physics Again?

There are predictions that most galaxies will reveal dwarf galaxies within their halos, but few of these smaller galaxies have been identified. Only about 40 of the predicted thousands of such galaxies have been seen orbiting the Milky Way. This has been an astronomer's puzzle for some two decades, and has even been called a ‘crisis' by some.

"If these dwarf objects are dominated by dark matter, this could explain the discrepancy while offering new insights into the true nature of dark matter," said Neal Dalal of the University of Illinois.

With this new insight, scientists believe they will be able to solve this long-standing puzzle and find more dark matter objects using the Atacama, and other, telescopes.

"This is an amazing demonstration of the power of ALMA," said team member Gilbert Holder, of McGill University in Canada. "We are now confident that ALMA can efficiently discover these dwarf galaxies. Our next step is to look for more of them."