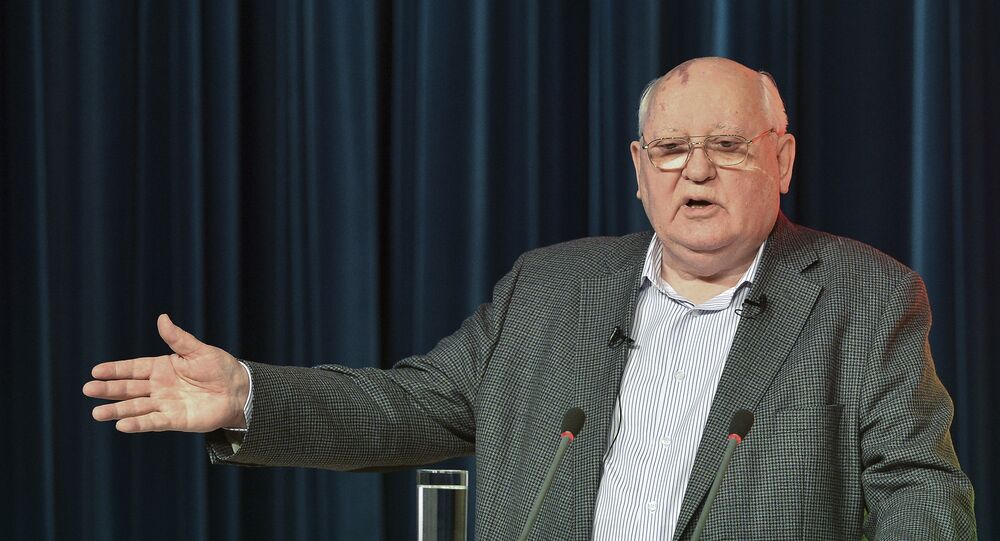 MOSCOW (Sputnik) – Former Soviet leader Mikhail Gorbachev said on Thursday that the main threat to the world was the start of a new arms race and promised to do everything in his power to stop a new cold war.

"Now we see attempts to reverse all this [efforts to end arm race and Cold War], to throw the world into the past. And the biggest danger is a return to confrontation, the beginning of a new arms race. There is already talk of a nuclear war as if it is something acceptable, there are preparations for it, discussions of scenarios… We cannot give up in despair. I believe that the new cold war can be stopped, and I will do everything to this end," according to Gorbachev's statement that was read out before the premiere of the film "Meeting Gorbachev" in Moscow.

© Sputnik / Ramil Sitdikov
INF Treaty Co-Signer Gorbachev Calls US Pullout Unacceptable
He also echoed the words of former US President Ronald Reagan, saying that a nuclear war could not be won and no one would emerge as the victor. Gorbachev also stressed that these words should become the slogan of a new movement against the nuclear threat.

"We must refrain from [the new cold war], we must continue the path that we have outlined, ban war and, most importantly, get rid of nuclear weapons as such. Anyone who knows what kind of weapon it is can confirm my appeal to everyone: we must not allow further proliferation, we must destroy [those arms]," Gorbachev said.

He also criticized the intention of the US leadership to withdraw from the Intermediate-Range Nuclear Forces (INF) Treaty.

© AP Photo / Yves Herman
NATO Ready to Continue Dialogue on INF Treaty With Russia
"We need to calmly and firmly stick to the course of cooperation with the United States… And Americans should know that we, Russians, are in favor of preserving understanding that we used to have, and making it our credo for everyone," Gorbachev added.

In October, US President Donald Trump announced his country's intention to withdraw from the INF Treaty over Russia's alleged violations of the accord.

The INF Treaty was signed by Gorbachev and Reagan in 1987. The historic agreement saw both sides cut their nuclear arsenals and pledge to destroy all cruise or ground-launched ballistic missiles with ranges between 310 and 3,400 miles.

Gorbachev: Political Will Is Needed to End US-Russia Row Over INF Treaty