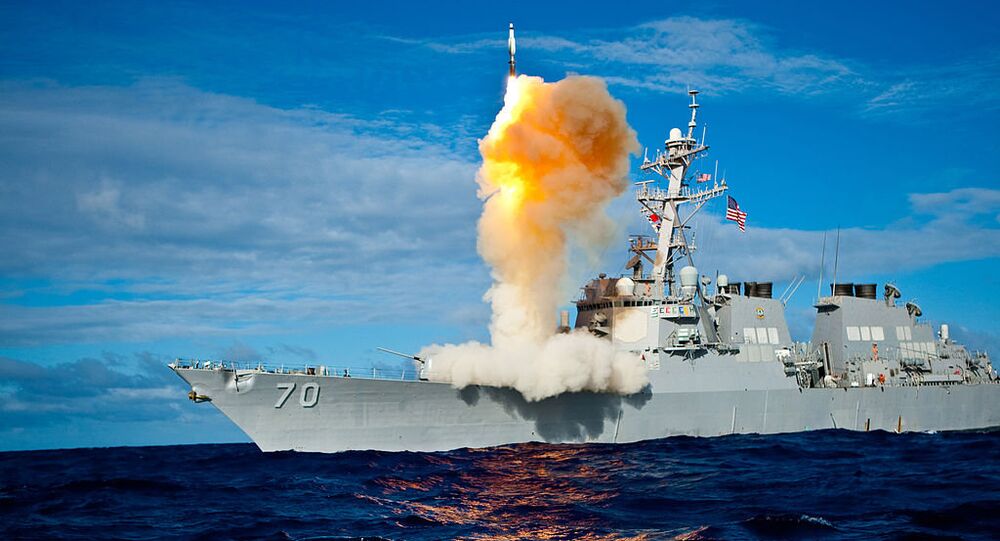 A target missile, a Standard Missile-45, was launched from a Hawaiian facility in late October, just after Donald Trump pledged that Washington would increase its nuclear potential until the rest "come to their senses" and pull out of the historic Cold War treaty signed with the then Soviet Union.

US Missile Defense Agency has released photo and video footage which reveals that the Pentagon had successfully tested a missile interceptor, Standard Missile-3 (SM-3) Block IIA, operating against a target intermediate-range missile, which was launched from the Pacific Missile Range Facility at Kauai, Hawaii on October 26.

The US Navy’s guided-missile destroyer USS John Finn (DDG-113) managed to detect and track the target missile during Flight Test Standard Missile-45 by means of its onboard AN/SPY-1 radar using the Aegis Baseline 9.C2 weapon system, the MDA said in a statement issued that same day. The intermediate-range target itself appears, meanwhile, to contradict the INF treaty, which, at that point of time, the US hadn’t yet formally withdrawn from, but had merely voiced plans to.

“This was a superb accomplishment and key milestone for the SM-3 Block IIA return to flight,” commented MDA Director Lt. Gen. Sam Greaves on the mission, jointly completed with Japan, the country’s “cooperative development partner.” “My congratulations to the entire team, including our sailors, industry partners, and allies who helped achieve this milestone,” Greaves noted.

The IIA version has larger rocket motors and a bigger kinetic warhead, raising its effectiveness against evolving threats. SM-3 is the only known ballistic missile interceptor that can be launched at sea and on land.

On October 20, President Donald Trump announced the United States would pull out of the INF, the Intermediate-Range Nuclear Forces Treaty, accusing Moscow of violating the historic 1987 agreement’s terms. Days earlier, Trump vowed to increase Washington’s nuclear potential until the rest "come to their senses."

The Kremlin has refuted the US accusations, stating that the scrapping of the INF Treaty would force Russia to take measures to guarantee its security. Russia has repeatedly stated that it complies across the board with its obligations under the deal, with Russian Foreign Minister Sergei Lavrov noting that Moscow, for its part, has a number of questions regarding Washington’s missile policies. In particular, Moscow pointed out that the US is stationing on land in Romania and Poland, from where it may be possible to launch Tomahawk-type cruise missiles, which are banned by the INF.

The US pull-out announcement also raised a number of serious concerns with Washington's European allies, including France, Germany, Italy, Spain and the Czech Republic.

The treaty, signed by the Soviet Union and the United States in 1987 in the final stages of the Cold War, was meant to diminish the threat of a nuclear war in Europe, which could be easily provoked given intermediate range missiles' comparatively short flight time.

READ MORE: New INF Treaty: Including China Would Be a 'Brilliant Thing' — Prof