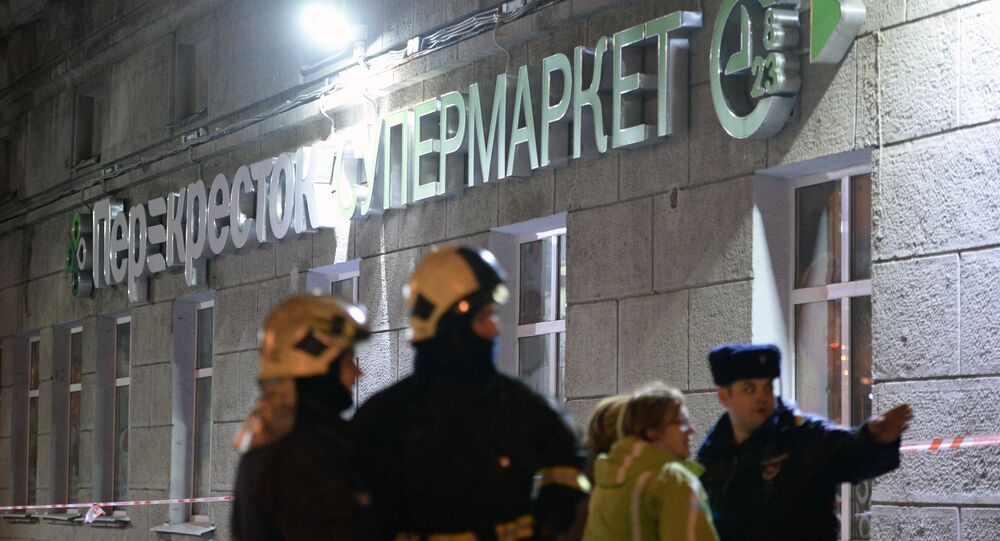 The Federal Security Service (FSB) detained on Saturday an individual suspected of organizing and conducting a bombing that injured 13 people in Russia's second largest city.

On Sunday, the Russian Investigative Committee (RIC) reclassified the case of the blast at the Perekrestok supermarket at the Komendantskiy prospect on December 27 for a terror attack.

© Sputnik / Alexander Galperin
WATCH St Petersburg Supermarket Attacker Caught on Camera
The suspect detained in connection with the explosion was charged with terror offenses, according to Svetlana Petrenko, a spokeswoman for the RIC. A court in St Petersburg ruled to arrest the man for two months.

Petrenko said that the man had given testimony that confirmed that he was the organizer of the explosion.

"According to the suspect, the motive behind the crime was hatred toward organizers and adepts of psychological training courses, which he attended earlier," she noted, adding that the DNA tests indicated that the detained man made the explosive device that was detonated in the shop himself.

The suspect is now expected to undergo a psychiatric expertise to assess the level of his sanity.

The development comes in the wake of reports that the violent extremist group Daesh had claimed the responsibility for the attack. However, the reports haven't been confirmed.

Russian President Vladimir Putin called the blast a terrorist attack on December 28, while the investigators were probing "all possible versions" of the incident.

The FSB busted a Daesh cell in St Petersburg in the middle of December. The group was said to have planned a number of terror attacks in the city that would be carried out with explosives and target large crowds of people and famous sites like the renowned Kazan Cathedral.