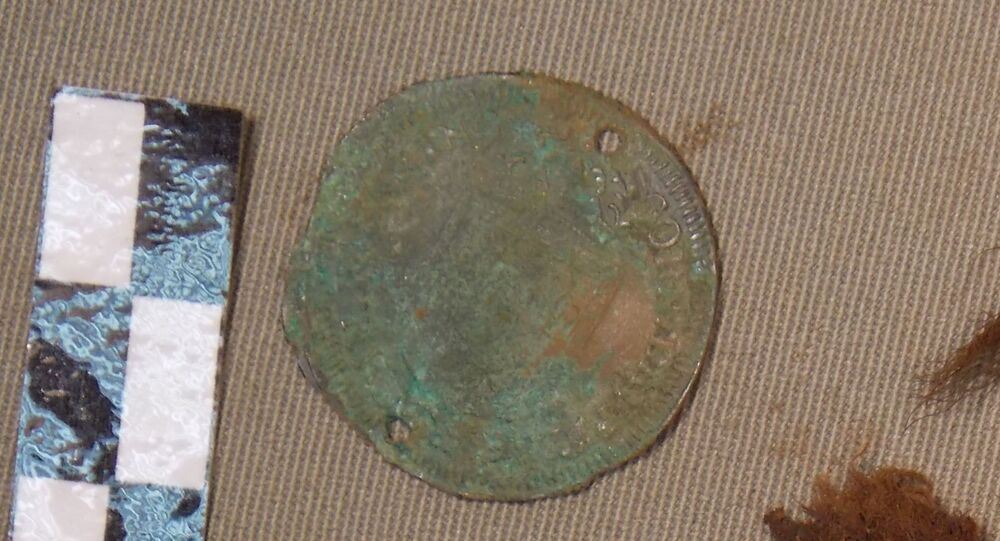 While exploring centuries-old settlements in the Yamalo-Nenets Autonomous Region in northwestern Siberia, a team of archaeologists discovered ancient counting tokens of Louis XIV King of France and Navarre, also known as Louis the Great, whose 72-year-long reign is the longest of any monarch of a major country in European history.

© Flickr / Steve Dorman
Breakthrough Listen: Australian Telescope Gets in on Search for Aliens
Regina Konstantinova — The excavations took place at the upper reaches of the Taz River near the Kikkiakki village of Krasnoselkupsky district in the Yamalo-Nenets Autonomous Region, where the settlements of a very special ethnic group have been located for centuries. Researchers from the Siberian branch of the Russian Academy of Sciences have been studying these sites since 2013. Numerous interesting finds were discovered there during the latest excavations, the leading researcher Olga Poshekhonova told Sputnik.

"This year we explored the archaeological sites of 17-19th centuries, which correspond with the Northern Selkups, one of the small indigenous peoples of the Russian North," said Olga, who is a researcher at the Laboratory of Anthropology and Ethnology at the Institute of Problems of Development of the North, the RAS. "As a result of the excavation, we received a rich collection of artifacts relating to the material and spiritual culture of the Northern Selkups."

© Photo : Courtesy of Olga Poshekhonova
Counting tokens with a portrait of Louis XIV King of France and Navarre

"We found seven identical counting tokens with a portrait of Louis XIV and an inscription ‘LOVIS XIV.ROY D.FR.ET DE NAV' — Louis XIV King of France and Navarre," she revealed. The coins' reverse says "RECHN.PFENING CORN.LAVEFERSK" — Counting Token of Cornelius Lauffer, which means he issued these tokens. There is also an emblem in the shape of a shield with three lilies and a crown above it.

It may seem unusual that such coins were found in the centuries-old settlements in northwestern Siberia, but not for the Russian archaeologists.

"Counting tokens are not uncommon for the sites of this age in Western Siberia. Dutch, French, German coins can be found here. When they were removed from circulation, Russian representatives specifically purchased those tokens at the price of scrap metal and transported them to Siberia to exchange with the local peoples. All the aboriginals liked to use the coins to decorate their costumes: hats, dresses, coats," Olga explained.

Various beads and fine art plastics were used for these purposes, too. The Selkups, who were mainly engaged in hunting and fishing, exchanged skins and fish for these little decorations. That is why each coin has two holes for hanging or sewing, according to the researcher.

The other findings include artifacts produced by the Selkups' themselves: arrowheads, knives and all sorts of brass and bronze costume jewelry, as well as Russian-produced items, also brought to Siberia for barter, the scientist added.

"Among the most interesting findings, there are a few iron knifes with beautiful enamel handles of Russian production. We have also found a handle with brass plates covered with intricate patterns, created by Russian masters," Olga continued.

1 / 4
© Photo : Courtesy of Olga Poshekhonova
Ring pendants for woman's waist produced in the 17-19th centuries by the Northern Selkups

"Interestingly, we discovered ancient jewelry of West Siberian and Ural region production which dates back to long before the cultural layers they were found in. These include earrings, embroidered patches, noisy pendants and pots. There were also notable sets of Russian buttons, dating from the 12th to the 18th century," the researcher said.

© Photo : Courtesy of Olga Poshekhonova
The figure of a lion that is supposed to be of Western European production

"We had a joint expedition with the staff of the German Archaeological Institute, and we are sure to continue our cooperation next year. This time the Germans visited us as guests: they were just getting acquainted with the subject of their future research. We jointly conducted a small paleobotanical research on the northern Selkup settlements of the 17-18th centuries and more ancient settlement of the 10-12th centuries."

The German researchers, interested in rich Russian ethno-archaeological materials, were impressed by what they saw, according to Olga:

"They were amazed by the modern local Northern Selkups. This people, as well as the Nenets, the Khanty and the Mansi, have a well preserved culture, lifestyle, housekeeping manners, etc. The Selkups adapted to the harsh conditions of the North, organically using the landscape as much as possible."

© Photo : Courtesy of Olga Poshekhonova
Abandoned winter dugout at the Selkups’ settlement near the Shirta River (constructed and used at the beginning of 2000s)

"The economy and agriculture of the Northern Selkups are still based on fishing, hunting and reindeer herding for transportation. Our colleagues from Germany noted that houses are surprisingly similar to the Neolithic and Eneolithic dugouts, which are usually explored by the archaeologists in their excavations," the researcher said.

© Photo : Courtesy of Olga Poshekhonova
A modern "deer house" at the Selkups’ cattle camp near the Shirta River, an inflow of the Taza River. It is built to protect the deer from midges

"The German archaeologists were simply fascinated by Selkups' fishing weir, one of the most ancient and very effective ways of fishing in small rivers. It was invented a long time ago, but Selkups still use it to this day. This method is a lazy one: all you need to do is just put wooden fish traps across the river and then come back every morning to take out the catch. It's nothing unusual for us — we have been using this data for historical reconstructions for a while — but our foreign colleagues were surprised," Olga concluded.