Breakthrough Listen: Australian Telescope Gets in on Search for Aliens 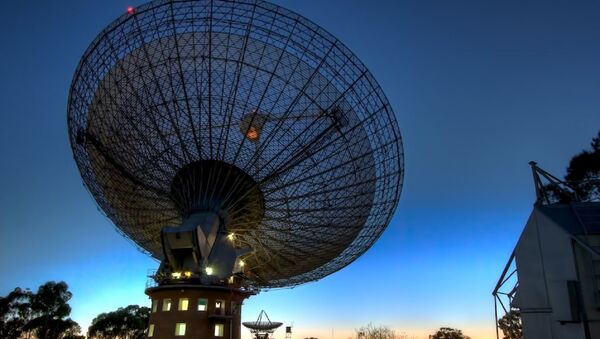 © Flickr / Steve Dorman
Subscribe
International
India
Africa
The Parkes Observatory radio telescope in Australia is now joining in a $100 million search for signs of alien life, alongside two telescopes in the United States.

Science & Tech
Don't Tell the Aliens! World's Leading Astrophysicist Issues Stark Warning
“Breakthrough Listen” is one of two initiatives launched by Breakthrough Initiatives last summer that will survey the million stars in the Milky Way that are the closest to Earth, as well as scan the closest 100 galaxies.

"We believe that life arose spontaneously on Earth, so in an infinite universe, there must be other occurrences of life," famed physicist Stephen Hawking said at the Royal Society in London, at the announcement of the initiative. "Somewhere in the cosmos, perhaps intelligent life might be watching these lights of ours, aware of what they mean. Or do our lights wander a lifeless cosmos, unseen beacons announcing that, here on one rock, the universe discovered its existence? Either way, there is no better question. It's time to commit to finding the answer, to search for life beyond Earth. The Breakthrough initiatives are making that commitment. We are alive. We are intelligent. We must know."

Also contributing to the hunt are the Green Bank Telescope in West Virginia and the Automated Planet Finder at the Lick Observatory in Northern California.

"The addition of Parkes is an important milestone," Yuri Milner, billionaire  founder of the initiative, said in a statement. "These major instruments are the ears of planet Earth, and now they are listening for signs of other civilizations."

Science & Tech
China's Monstrous FAST Radio Telescope to Join the Hunt for Aliens
On Monday, scientists pointed the Parkes telescope at the Proxima Centauri star system to do their first observations as part of Breakthrough Listen.

“Proxima Centauri is the closest star to the sun, lying just 4.2 light-years away from Earth's star. This past August, astronomers announced the discovery of an Earth-size planet orbiting in Proxima Centauri's ‘habitable zone,’ the just-right range of distances where liquid water could exist on a world's surface,” Space.com reported.

The planet, named Proxima B, travels around its host star, Proxima Centauri, once every 11 days and is currently thought to be uninhabitable.

Over the next decade, Breakthrough Listen is expected to spend $100 million on efforts to discover signs of alien extraterrestrial life.

The world’s largest radio telescope, the new five-hundred-square-meter Aperture Spherical Radio Telescope in China, will also be used in the initiative.