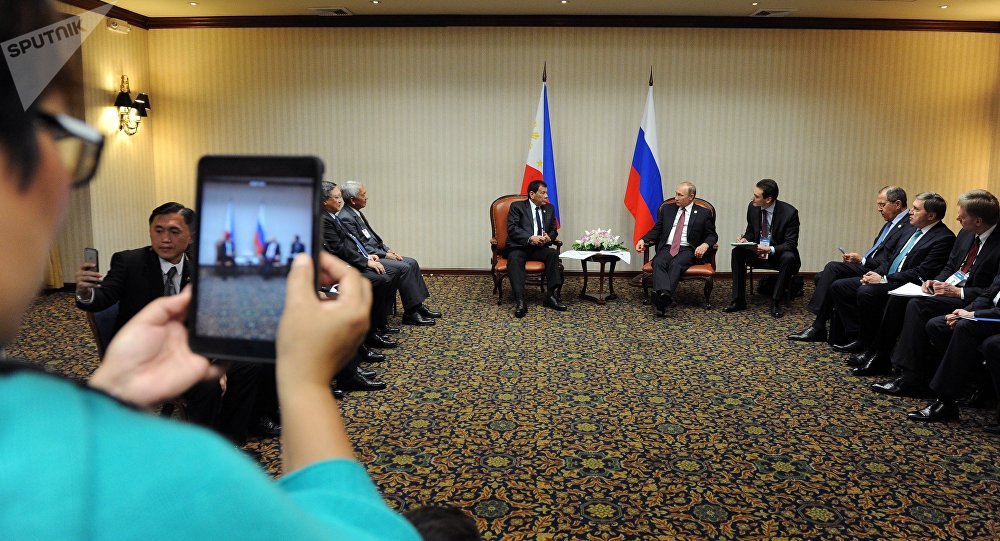 President Vladimir Putin said Tuesday that Russia and Philippines "many promising areas of interest" to cooperate on, adding that the package of documents to develop dilateral ties will be signed on Wednesday.

© AP Photo / Aaron Favila
'Promising' Partnership: What You Need to Know About Russia-Philippines Ties
MOSCOW (Sputnik) — The Russian president said that the two countries had good prospects for cooperation, including in the military-technical sphere.

Putin is holding talks with Philippine President Rodrigo Duterte in the Kremlin.

"We have many promising areas of interest, including power engineering, transport infrastructure, energy and, of course, cooperation in the area of military-technical cooperation," Putin said opening talks with Duterte.

A package of documents, prepared for the ongoing visit of Philippine President Rodrigo Duterte to Russia, will be signed on May 24, Russian President Vladimir Putin said Tuesday.

"Our employees and colleagues did a good job and prepared a whole package of documents. Your ministers will remain here [in Moscow] and tomorrow this package of documents, which is aimed at the development of our ties, will be signed," Putin said at the talks with his counterpart.

Earlier in the day, the Philippine leader declared a martial law on the southern Philippine island of Mindanao, following the deadly firefight between government security forces and Islamists.