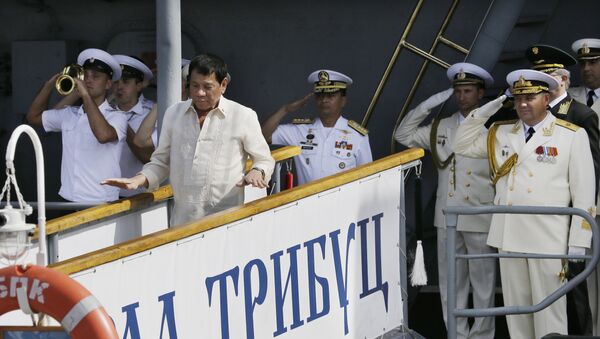 Before his visit, Duterte said that one of his top priorities is to secure Russian precision-guided bombs to use on Islamic militants in the southern Philippines.

"If they can spare us with the precision guided (bombs)," Duterte said when discussing the purpose of his trip. "We have so many smart bombs but not as accurate."

The Philippines is a traditional military ally of the US, but Duterte has expressed discontent with Washington's foreign policy.

In an interview with RT and other Russian media ahead of his visit to Moscow, the Philippines leader reiterated that his country should have ties with Russia and China, as Western nations are only interested in double talk and disregard Philippines interests.

"I have nothing against America, [US President Donald] Trump is my friend. But my foreign policy has shifted. I want to deal with China and Russia. Because in Western world, it’s double talk," he said.

"You treat me as if I'm your colony still. You must be kidding! We’re an independent country. I want my country to be treated with dignity," he added.

What Will Top the Agenda of Putin's Talks With Philippine President Duterte?
Last month, the Philippines Defense Minister Delfin Lorenzana praised Russia's actions in Syria and said that he intended to discuss obtaining Russian military equipment at a meeting with his Russian counterpart Sergei Shoigu.

"We are looking at helicopters, submarines, maybe sniper rifles, drones and maybe some armor vehicles, that's what we are looking at," Lorenzana said.

Military analyst Alexander Perendzhiev, Associate Professor at the Plekhanov Russian University of Economics, told RIA Novosti that Manila is keen to cooperate with both Moscow and Beijing in the fight against terrorism in Southeast Asia.

"The Philippines can create an alliance with Russia and China by joining or cooperating with the Shanghai Cooperation Organization (SCO) and its Regional Antiterrorism Structure," Perendzhiev said.

"Last year, ISIL [Daesh] Mark II appeared in Southeast Asia. I said then that this was an anti-Chinese project that aims to weaken the influence of China in the region. Of course, this would be a blow to all the larger states in Southeast Asia, including the Philippines. Most likely, the Philippines President is saying this because he fears that this project will be realized. In this case, he can’t rely on the US because he suspects that this 'ISIL Mark II' might originate in the US," Perendzhiev declared.

Military Tour: Philippine President Boards Russian Missile Cruiser in Manila
Although Duterte has threatened to terminate a pact with Washington that allows US troops to visit the Philippines, However, the analyst doubts that Duterte will be able to limit military coordination with the US so easily.

"The Philippines needs to begin by establishing tripartite cooperation institutions with Russia and China. It could begin as an observer of an existing structure like the Shanghai Cooperation Organization, and establish counter-terrorism cooperation within the framework of this structure."

On Monday, Duterte said his country is interested in purchasing Russian helicopters and planes, as well as precision-guided weapons, to fight against rebels across the country.

"We are just fighting a rebellion, just like in Russia. They are just a few numbers but [they are causing] havoc… You need intelligence and precision-guided weapons. We do not have that kind of technology. It is just arms, small arms and rockets that can hit earth with accuracy. And what is very importance with insurgency is helicopters and planes, not jets but propeller-driven — less expensive but more effective in fighting small number of terrorists in areas of conflict," Duterte said.

000000
Popular comments
I think Duterte could get a much better value for his money with Russian military gear, and it would be more reliable under the conditions there.
stop the NATO wars
22 May 2017, 21:56 GMT1
000000
Unfortunately we have been witness to a lot of "double speak" from Duarte as well.