'Promising' Partnership: What You Need to Know About Russia-Philippines Ties 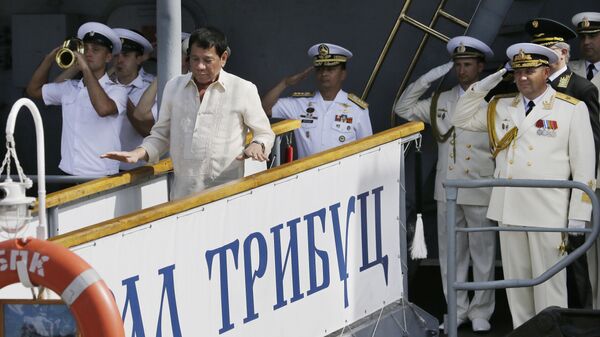 © AP Photo / Aaron Favila
Subscribe
Philippine President Rodrigo Duterte on Monday arrived on his first official visit to Russia, which will last for almost an entire week through Friday in what will become the first high-level Philippine trip to Russia in almost a decade.

Anti-Terror Alliance: Philippines Seeks Military Cooperation With China, Russia
MOSCOW (Sputnik) — Diplomatic relations between the Soviet Union and the Philippines were established on June 2, 1976. On December 28, 1991, the Philippines officially recognized Russia as the USSR’s successor. The Philippines are a promising partner for Russia in the Asia-Pacific region. The two countries maintain a regular political dialogue at various levels.

In June 2009, then-Philippine President Gloria Arroyo made an official visit to Russia, which coincided with her attendance at the St. Petersburg International Economic Forum (SPIEF).

In September 2016, Medvedev held negotiations with Duterte during the East Asia Summit in Vientiane in Laos.

In November 2016, Russian President Vladimir Putin met with the Philippine leader on the sidelines of the Asia-Pacific Economic Cooperation (APEC) Summit in Lima, where the two leaders expressed their mutual commitment to expanding and diversifying bilateral ties.

On December 4-6, 2016, Philippine Secretary of Foreign Affairs Perfecto Yasay paid a working visit to Moscow. During his negotiations with Russian Foreign Minister Sergey Lavrov, the officials exchanged opinions on a wide range of bilateral issues.

Russia and the Philippines have similar views on many international issues. They cooperate in the United Nations and a variety of formats within the Asia-Pacific region, including dialogue partnerships such as Russia-Association of Southeast Asian Nations (ASEAN), APEC, the East Asia Summit, the ASEAN Regional Forum on security issues, the ASEAN Defense Ministers’ Meeting (ADMM) and the Asia-Europe Meeting (ASEM).

Russian Vnesheconombank to Unveil Concept of Developing Innovations at SPIEF
Priority is given to trade and economic cooperation.

According to the Russian Federal Customs Service, the country's trade with the Philippines totaled about $440 million, including Russian exports worth $145.8 million and Philippine imports worth $294.2 million.

Russia’s exports to the Philippines consist of mineral products, which take up over 63 percent of total Russian exports to the Philippines, as well as timber and pulp, metals and metal produce, cars, machinery and transport vehicles, chemicals, food products and agricultural raw materials. Cars, machinery and transport vehicles are also the key import items  and amount to almost 80 percent of Russia’s total imports from the Philippines. Other imports include food products and agricultural raw materials, textiles and footwear and chemical industry products.

The Russia-Philippines Intergovernmental Commission on Trade and Economic Cooperation was set up in November 2015 to promote bilateral trade and economic ties. The commission held its first session on April 28, 2017, which was co-chaired by Russian Deputy Economic Development Minister Alexander Tsybulskiy and Undersecretary Ceferino Rodolfo of the Philippine Department of Trade and Industry.

In 2009, the Philippine-Russian Business Council was formed, followed by a similar Russian agency established under the Russian Chamber of Trade and Industry in November 2011.

The two countries cooperate in military equipment and military technology, including Russian military exports to the Philippines and the exchange of military delegations. The Philippines has expressed interest in Russian small arms purchases, precision-guided missiles, helicopters and aircraft.

Philippines Open to Joint Military Drills With Russia
On January 2-7, 2017, a Russian Pacific Fleet flotilla, including the Admiral Tributs large anti-submarine ship and the Boris Butoma tanker, made a friendly visit to the Manila port. The high point of the visit was Duterte’s tour of the Admiral Tributs.